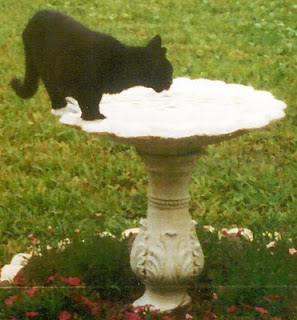 My first cat used to drink from our backyard birdbath, as you can see from this photo. Seemed to be his favorite water. Maybe it tasted like birds. Whatever the case, it became his final resting place. When his kidneys finally failed, we buried him right next to that birdbath. I think he'd like that.

Shortly before he died, he'd developed a friendship with a smaller black cat from down the street. They'd hang out together all day long, climbing our scrub oak tree in the back yard or just sitting in the garden together. She'd even hunker down in the grass of our front lawn when he came inside for the night, waiting for him to join her again the next morning. We'd call her owners to let them know where she was, just so they wouldn't worry that something had happened to her, but she truly seemed to be in love with our cat. I always thought of her as his little protege.

After we buried him, we observed one of the most curious and touching things. For about three days, she would come to our yard and lie on his grave. She hadn't been anywhere around when we buried him, so how did she know that he was there? After that, she stopped coming by until about a year later, and then she ambled up the street one evening when we were sitting out in the front yard to say hello. Her family moved away not long after that and we never saw her again.

I often think of her, and wonder about the unknown recesses of the feline mind. Just exactly what DO they know that we don't? Whatever it is, I'm glad that they have decided to include me in their community. I derive great joy from communicating with cats, and helping them when I can. It's the least I can do, when they have been such wonderful companions to me.
Posted by Lynn Maria Thompson at 2:52 PM