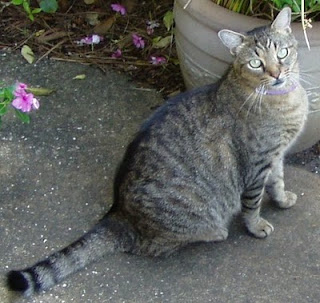 Valentine's Day has never been my favorite holiday, and 2009 made it even less so. I spent that at the emergency vet clinic with our darling little Frankie, shown here, who was breathing very shallowly and seemed to be swollen through his chest area.

As it turned out, Frankie was in the final stage of FIP. Not knowing his history, the doctors at the emergency clinic didn't pick up on that. They drained the fluid from his chest, which had consumed about 75% of his chest cavity, to relieve his breathing a little, and kept him overnight until he was stable. He came home that Sunday afternoon, but had to go into the hospital at his usual vet on Monday morning. He never came home again, passing away in the night of the following Sunday.

In memory of Frankie, I'm offering a 10% discount on all items purchased at Old Maid Cat Lady from February 14-21, the anniversary of Frankie's last week in this life. To get the discount, when you're checking out you should enter the code FRANKIE210. (This only applies to items purchased through OMCL's shopping cart, as I'm unable to discount items sold by affiliated retailers.)

To finish the story -- We buried little Frankie in our side yard, and a statue of St. Francis now watches over him. The staff at our vet had written little notes all over the box in which they placed his body and taped flowers to it, as they'd grown to love him almost as much as we did during his final week with them. The notes from each of them in the sympathy card they gave me sounded like they had really gotten to know his sweet personality during his stay there. My mother missed him every day until her own death. I continue to miss them both, but am hoping that they are reunited in spirit now.
Posted by Lynn Maria Thompson at 6:29 AM