Vixen is 22...or Thereabout 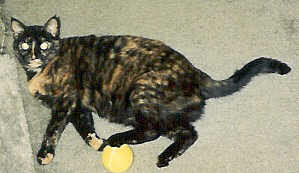 Twenty-one years ago this month, a feisty little tortoiseshell came to join my household. She'd been a feral cat in the apartments where I lived, one who'd lurk in the hedges and swipe a spotted paw out at you when you passed. I'd see her following along behind the maintenance men, playing with whatever tool belt or electrical cord was dangling behind them. On sunny afternoons, people doing laundry would have to step over her as she sprawled right across the middle of the laundry room floor in the afternoon sun streaming through the westward window. She had big-time attitude.

My other cat had noticed her, too. That was mainly because she'd climb the tree right outside our living room windows and flirt with him. He was a very clingy cat who suffered terrible separation anxiety when I left him to go to work, or anywhere else, for that matter. He was mesmerized by this wild little thing who seemed to take pleasure in taunting him. I toyed with the idea of taking in the odd-looking little cat, who reminded me of an owl with her prominent lynx tips and vivid yellow stripe down the nose. Wily and cantankerous, her personality was most fox-like, thus earning her the name given to female foxes. She seemed to know her name and respond to it from the very beginning. As near as I could figure, she seemed to be about a year old.

Just as tigers have striped skin, Vixen also has sections of black and pink skin; two pink toes with all the rest black, for example. There are even black spots on the inside of her mouth. Her ears look like someone flicked orange paint off a paintbrush onto them, both inside and out. She could be easily spotted from a great distance by that yellow chest, which glowed like a beacon when I spied her sitting in a drainage pipe beside the duck pond one afternoon. I stepped outside and called to her; she gave a little cry and came running straight over to me, circled around and came up beside me, where she let me pick her up and carry her inside. And that was that.

When the time came to move into another apartment, I took both cats to the vet for baths and de-fleaing (this was in the days before the back-of-the-neck treatments we have today), then over to the new place. Vixen was still pretty feisty and didn't like to be touched or picked up. But she was smart as a whip! The cats loved going out onto our 3rd-floor balcony, but were showing a troubling tendency to stand with their front feet on the outside of the lower rail, peering over onto the balcony below. With a fear that they'd jump down there, I kept a close eye on them and stopped them, admonishing, "No back feet on the railing!" Vixen took this to heart. A few months later, I was standing on my balcony talking to a friend, who casually propped her foot on the railing. Vixen pranced over to her and started swatting my friend's foot, claws sheathed, as a reminder of "No back feet on the railing!"

Vixen loved being out on the balcony and would often chew off the tips of my aloe plant. Loved it, that is, until the weather turned hot and humid. As soon as that hot air would hit her in the face when the door slid open, she'd pull back, turn around, and head back into the air conditioning. Smart girl. She loved playing with tennis balls, which she'd grab with her claws and sort of throw for herself. My other cat was another story; she hated him. When he'd stand at the door and yowl to go outside, she'd get an annoyed look on her face. After a few minutes, when she'd had enough, she'd go over and swat him in the face a few times, then sprint across the room. He was always too shocked to chase her. Many was the time I'd find a chunk of his fur on the floor where she'd gotten him good with her claws.

When we moved to Atlanta in the mid-90s, we had a southwesterly facing sunroom. She'd spend every afternoon there, basking in the warmth of the sun. I swear, it made the orange spots in her coat more vivid. Little by little, she got more comfortable sleeping on the bed with me, although it was always at the foot and not near my other cat on the opposite pillow. She also became more accustomed to being held and petted, and even came to enjoy a good brushing...but not for long. When she'd had enough, she'd walk away, and woe be unto the one who tried to stop her. Out would come claws and teeth, and that old feral personality would emerge again.

After my other cat died, I worried that she was growing bored alone all day while I was at work, so I took to leaving the TV on for her...on Animal Planet, of course! She paid attention to it, too, because she changed the way she bit after watching shows on there. Before, she'd grab your hand with her claws and pull it toward her, then sink her teeth into it so she had you trapped. But after watching a fair number of snake shows on TV, she began striking and pulling back, just like a snake would do. It was fascinating...albeit no less painful!

These days, she's become a grand old lady. Her hips give her a little trouble, and sometimes she loses her balance when she first stands up. The brilliant colors in her coat have become slightly duller, more faded with age. She no longer jumps up on any furniture, including the bed. There's no more batting of tennis balls or clawing the sofa. She still enjoys combing her face on the little arched brush I gave her one Christmas; I think it's her favorite gift she's ever received. She loves her canned food meals, and has become accustomed to getting them at least three times a day. But she also still loves her "crunchies", which she swallows whole since her teeth aren't what they used to be. She stands in her litter box and whizzes over the side, a behavior I've addressed before in this blog. For the most part, she's healthy as can be and can often be found curled up and sleeping in her bed underneath my desk. That's where she is now, in fact.

So raise a glass with me to toast 21 years together with my best girl ever, my little Vixen! May she go on for many more years to come.
Posted by Lynn Maria Thompson at 4:03 PM