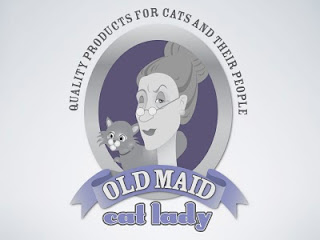 When I heard about Jason Sadler's business, IWearYourShirt.com, I thought, "Brilliant!" This guy gets companies to sponsor him every day of the year, and he wears a T-shirt with their logo on it wherever he goes that day, whether it's to the mall, traveling, or to speak to a group at a conference. He also posts info & video about each day's sponsor on his blog, YouTube, and all the social networking sites. Major corporations pay him an amount that starts at $2/day for January 1 and goes up $2 each day of the year.

Apparently, I'm not the only one who thought it was a brilliant idea, because some other guys have modeled their business after his. Dana Severson and Tony Holmes came up with IDesignYourLogo.com, and they do much the same thing with logo design. One logo per day, and the price increases throughout the year. I bought June 16, and what you see here is the logo they designed for OldMaidCatLady.com. Pretty cool, huh?
Posted by Lynn Maria Thompson at 4:46 PM