Do Your Cats Talk to You? 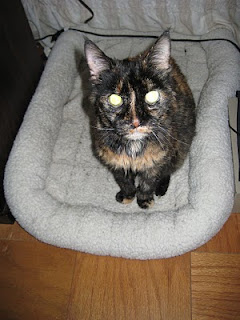 My little cat is about 22 1/2 years old now, a sort of "super-senior", since they say cats become "seniors" by about age 8. She doesn't hear well, yowls a lot, sometimes gets a tremor in her back leg, seems to move more gingerly, and several other things that let me know she's feeling her age. We have a pretty close bond, but if she's hurting somewhere she can't tell me that (although it certainly seems like she's trying, sometimes).

So when Facebook told me one of my friends had "liked" a page called "The Pet Psychic", I was curious. I'd watched professed pet psychic Sonia Fitzpatrick's show on Animal Planet, and was convinced that she could actually "hear" what animals were trying to say to her. And while I think the term "psychic" is a misnomer that can get these gifted people lumped into a group with charlatans, soothsayers, or just plain kooks, I thought it worth further investigation.

So I visited the pet psychic's actual web page and found lots of wonderful testimonials from people whose animals she'd helped, along with photos of their smiling faces. She offers both live and phone sessions, so she can work with animals located anywhere, and even those who have passed away. I thought perhaps she could tell me what I could do to make Vixen's super-senior life more comfortable for the time we have left together, and also wondered if she may have any hidden health issues. So, yes, this crazy old maid cat lady scheduled a session. I filled out the information form, uploaded a photo of Vixen, made my payment, and scheduled my half-hour consultation.

The Pet Psychic is a California woman named Laura Stinchfield, and she called right on the dot at the appointed time. She was quite vivacious and struck me as a genuinely happy person. I gave her some preliminary information about Vixen, pretty much what I said above, and told her I was just curious as to what's going on in her little head. Laura said that she'd get images in her mind when the animals are talking to her, and sometimes if they're having pain, she'll feel it in that portion of her body. Sonia Fitzpatrick had reported something similar about the messages she receives from animals.

Vixen had just been asking for food before the call, but I'd delayed feeding her before checking with Laura on where Vixen needed to be during the session. Laura told me that she could eat and talk to her at the same time, so I went ahead and gave her some canned food. She was happily smacking away as the consultation began.

I first wondered if Vixen was experiencing pain anywhere. Laura told me she'd get silent for a minute while she asked Vixen and waited for her response, and said I may hear her typing. After that, she'd read to me the response she'd "received" from Vixen. At the end of the call, she'd forward her notes to me via e-mail. The very first bit was an alert to a new issue about which I'd had no idea. Here's what Vixen told her:
"sometimes i feel like my heart beats really fast and if i was younger i would be playing. i like the idea of playing but my knees sometimes bother me."
Whoa! She has a cardiac problem? That was something I didn't have any idea about, but certainly something to ask her vet to investigate. I'd noticed her limping sometimes & thought it may be her claws getting too long, but also didn't know it was in the knees.

Next, I wanted to know about the head shaking she'll do sometimes, almost like something's tickling her ears, or perhaps it could be something with her hearing that's bothering her. After a little silence and the clicking of her keyboard, here's what Laura got:
"i tilt my head cause it hurts. yeah my head and neck actually hurts and mom is right i dont hear at all. i hear like a beeping noise sometimes (alarm, microwave...) and sometimes i get very thirsty. I am hungry because my body needs it to stay alive otherwise i would feel tired all the time. i need the food to feel energy. My smell has been gone for a while."
So, cats can get tinnitis, too! Who knew? Laura said that sometimes older cats can have problems like hyperthyroidism or diabetes that will cause their blood sugar to fluctuate, and they can eat all the time without gaining weight if their thyroid gland isn't functioning properly. Something else for the vet to investigate. Not having any smell was another surprise; how sad, that she can't even enjoy her food for lack of smell! Maybe that's another reason she's always asking for more and eating four or five helpings of breakfast.

The next part, Vixen volunteered without being asked:
"Can you tell my mom sometimes i want her to pet me softly but not pick me up using my stomach. i dont like that feeling. I am also very sensitive to temperatures so I dont like it when her hands are cold. I like light areas but I dont like light areas for my eyes. its hard. my eyes hurt in the light but my body feels warm."
This puzzled me, because I don't ever pick her up by her stomach, but underneath her arms. She's never particularly liked being picked up or held (or even petted, for that matter!). But perhaps it was an alert that her stomach is bothering her; she has had quite a bit of diarrhea that even a probiotic supplement didn't help. Laura suggested that perhaps she could benefit from a heating pad or bed warmer, which I can certainly get for her. I'd known that her eyes were cloudy and wondered how much she could see, but knowing that the light hurts them was certainly another revelation. She used to love to bask in the sun; how sad that she can't enjoy that simple pleasure any more.

Next, we addressed the yelling. Vixen will sit in the dining room and yowl, something I'd recently read was a sign of kitty dementia. She'll do it even after I've just fed her, sometimes if she wants more food, and sometimes when there's still food in her dish. Here's what she had to say about that:
"i yowl for food cause i like it fresh and when mom mixes it up it makes it smell more. i like to be able to smell somethings. I get confused sometimes. I dont like confusing. sometimes in my box i get confused. i dont like paper in my box. i like soft litter that feels light when it moves. some litter feels dusty i dont like dusty."
Her pattern of having one subject lead to another was certainly interesting. Vixen does miss her litter box quite often, something I've previously talked about in this blog. I've resigned myself to having the floor replaced after she's gone, but I just figured she'd lost a sense of how big her body is, not that she was experiencing confusion while she's in there.

Laura told me she could feel the confusion in Vixen's mind; she'd be getting something from her, and then feel her thoughts sort of wander off. I asked her for clarification on Vixen's comments about the litter; I've been using three different kinds in her box, and wondered which she preferred. One is the Tidy Cats litter I've used with her for years, but she only rarely uses that box. The other box now has a mixture of the Dr. Elsey's Precious Cat Senior, which she seemed to prefer to the other, and some Purr & Simple mixed in with it. Since I've mixed the two when I ran out of the other, she doesn't seem to like that box, either...more reason to have the floor replaced one day. Here was what she told Laura:
"No i like the one that is like sand. Its really soft. that one is not soft."
Based on her having used the box with the Precious Cat Senior in it before I'd mixed the two, I think she meant that it's no longer soft with the other kind mixed in; Purr & Simple is large, brown pieces that look almost like rabbit pellets. I made a note to order more of the one she liked.

This post is getting rather long, so I'll save the rest of the consultation for the next one. There's lots more that had me in tears before the call was finished! Stay tuned.
Posted by Lynn Maria Thompson at 6:56 PM