Wisdom From My Cat 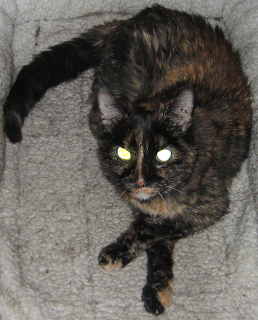 In the previous post, I talked about the consultation Vixen and I had with Laura Stinchfield, Pet Psychic. At about 20 minutes into the 30-minute session, we'd covered the three areas I'd mainly wanted to address during the call, and I'd gotten some valuable information about the state of Vixen's health and where she is having pain. Since we still had a few minutes left, Laura asked if there was anything else I wanted to know.

I told her that my mother had passed away last year, and shortly afterward Vixen had walked over to my mother's chair and sniffed it, like she missed her. I wondered if she still remembered my mother, if she missed her, if she was aware of what had happened to her, and if she ever sensed her spirit around. Animals are supposed to be sensitive to spiritual presences, so I was curious. What Vixen said absolutely shocked me:
"my grandma comes here one night a week. she comes here on the night that mom sometimes goes out and she stays here with me and she tells me that when i go to heaven i can live with her until i am ready to go be on my own. She says that she has a comfy lap still and she says that she is someone that is helping cats that miss their people on earth."
Laura asked if there was a night each week that I regularly went out with friends for dinner or something, and I said no, but I do to go choir rehearsal on the same night each week! How interesting that my mother would come and sit with the cat while I'm gone. The comment about her lap was curious, as my mother had never particularly liked holding any pets in her lap. What my mother was telling her made me wonder if Vixen was getting closer to the end of her life than I liked to think, and the next part made me wonder even more about that.

"grandma is saying that to me because I am going to be very sad to not live with my mom. my mom talks to me everyday and tells me many things about the world. She is my connection to life and i fear that if I die that I will be lonely for her and I will not know how to learn with out her. mom has taught me everything."
Cue the tears! I knew that Vixen liked to be near me, especially in her later years, but didn't have any idea that she felt that way about me. She was a very smart feral kitty when she decided to come and live with me at about a year old. I do talk to her a lot, but since she can't hear any more, I figured that was more for me than for her! But apparently the messages still get through.

The next part was also unsolicited, and made my eyes leak even more:
"can you tell my mom that i know that sometimes she gets worried and I think that worry is not good for her stomach. tell her that worry is not good for her stomach and worry should be drank away with lots of water and good thoughts. We should spend a little time each day thinking good thoughts together." That made both Laura and me smile, and we wondered what Vixen thought of as "good thoughts". So Laura asked her, and before relaying her response commented that, "She's very wise." Here's what she said:
"I think a good thought is planting something and believing it will grow and i believe a good thought is thinking that you will always be comfortable and cozy and you will have good food to eat and music in your mind even though you can not hear. I believe good thoughts is believing you are rich even though some may look at your life and think your not."
Wow! Laura asked if my mother or I had listened to a lot of music around her, and I told her that not only did I listen to a lot of music, but that Vixen had loved listening to music when she was younger; she'd position herself in my living room at the "sweet spot" and cock one ear toward each of the stereo speakers. Laura thought it was interesting that she would still remember the music from then and be able to enjoy it in her mind. There's usually a song going through my mind, so if cats really communicate telepathically, perhaps she's picking up on some of those, as well. Yeah, I was pretty emotional over this!

We were almost out of time, so I got in a quick final question about when I will sometimes pick Vixen up and set her beside me on the sofa, but she'll sit very near the edge, where I'm worried that she'll fall. She doesn't stay for long, and usually jumps back down at the first opportunity. I wondered if perhaps she would get a little vertigo up off the floor. Here's what she said:
"Yes, my neck hurts a lot. You right about me getting dizzy and i dont like being confused up high. I have a lot of moments of confusion. If i was an old lady my mom would have to pick me up at the supermarket."
My girl made a little joke! We both wondered where she would have gotten that image of a confused older person being picked up at the supermarket; perhaps it was another conversation she'd had with my mother, something that had happened to my mom that she'd never told me about. Fascinating!

The repeated mention of Vixen's neck hurting made Laura think that a chiropractor may help her; I told her I'd already mentioned her symptoms to my own chiropractor and would ask him about adjusting her. He's adjusted animals before, so may be open to the idea. She also needs to have some blood work run at her own vet, to see what's causing her lack of energy and determine what type of supplements may help her. Native Remedies makes something for just about every ailment, so I'll be trying out some of those items that I carry on OldMaidCatLady.com; perfect way to write reviews on them!

Who knows if our pets really do try to communicate with us telepathically? It certainly seems like they are sometimes. If you're also wondering about that, there's a link to The Pet Psychic from OldMaidCatLady.com's links page. I'd highly recommend Laura; she definitely knows animals very well and has given me some valuable information on how to make Vixen's remaining time with me as long and comfortable as it can be.
Posted by Lynn Maria Thompson at 8:20 AM