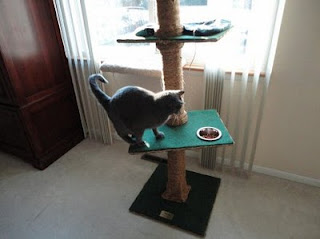 What do your cats do when you introduce new things to their environment? Different personalities will have different reactions.

Some immediately go to the new item and check it out, sniffing it up and down, maybe scratching it or rubbing their cheek on a corner to mark it with their scent. Others are a little apprehensive about the new "intruder" and take longer to warm up to it.

The latter was the reaction of Sneaky, seen here, to the new Kitty Palm his "cat dad", Kenny, had gotten him for Christmas. Kenny was dismayed when Sneaky didn't immediately take to the new toy. I suggested that perhaps catnip spray applied to it would help. But Sneaky didn't even need that; a little twine play and some treats in the built-in dish, and Sneaky was soon happily enjoying his new toy. "I don't have any kids, so he's like my baby," says his dad. Yes, Kenny, we all know how you feel! That's the spirit in which Old Maid Cat Lady was created. Glad that Sneaky likes his new toy, and I hope it brings you both many hours of pleasure.

My own little Vixen has displayed a similar lack of acceptance of new things. Perhaps this results from her first year of living rough, before she came to live with me. She's always been a little apprehensive of things. That would be a good survival instinct for a feral cat. Now that she's gotten older and her senses aren't as sharp, she seems almost fearful of anything new. Last year, I'd bought a new bed for her and placed it in a corner to which she'd taken to sleeping on the bare carpet. Knowing that she was getting older, I figured she'd love having the extra padding underneath her, and the bolster sides would help keep drafts at bay. At first, she'd curl up on the carpet just outside the bed, as though it were in her way. But within a few weeks, I walked into the den and found her happily napping in the new bed. Once she realized that it was okay, she accepted it into her world.

In a way, cats aren't really all that different from us. People accept change in different ways, too. We may embrace it, or reluctantly accept it. And most of the time, things turn out just fine.

If you're trying to introduce a new piece of cat furniture to your home, here are a few tips that will help your cats understand its place in their environment:
Purrs!
Posted by Lynn Maria Thompson at 10:16 AM