Which is Worse, Fleas or Flea Control? 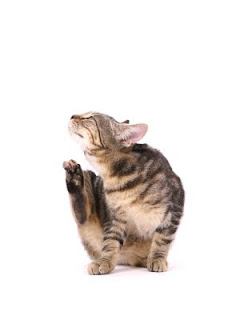 We all know the problems fleas can cause for your cat. Flea dermatitis is the most common, but if left unchecked, fleas can cause dehydration, severe anemia, and spread parasites such as tapeworms and other diseases to other cats, and even to humans.

First, a few basics. The cat flea (Ctenocephalides felis) is one of the most common species of flea on Earth. A female will lay up to 20 eggs each day on a cat, but the eggs can be shed out into the cat's environment as soon as they're dry. Flea larvae seek dark places and feed on dried blood in adult flea fecal material for up to 6 months before spinning a cocoon -- ewwwww!

Pre-emergent fleas can remain in the pupal stage in their cocoons for up to a year, until they sense the presence of a new potential host. In warm climates, they'll hatch in as little as a week. Once they feel a cat's body heat or the vibration of motion nearby, they emerge in mere seconds and jump on. Within just a few minutes, they'll be feasting on your cat's blood. In so doing, they may transmit nasty bacteria like Bartonella, Murine typhus, or Borrelia Burgdorferi, which has been linked to non-Hodgkin's lymphoma and Lyme disease.

Not to mention that flea bites itch! And so we who love our kitties have resorted to all sorts of dips, collars, sprays, bombs, powders, shampoos...you name it, if it says it kills fleas, we've probably tried it. But is this doing our cats (and ourselves) more harm than good?

That's what the U.S. Environmental Protection Agency thinks. They recently announced plans to review labels on flea and tick products for pets to ensure that warnings about their dangers are strong enough. So why are these products on the market in the first place if they can cause harm? Just re-read the first part of this article for the answer to that!

The primary danger appears to be in long-term exposure to low doses of poisons. In addition to possibly harming our cats, the risk can also extend to children and even adults. Most commonly mentioned as causing problems are the "spot-on" products you put on the back of your cat's neck. Some say that they can even compromise the immune system or cause nerve damage over time, and with most requiring monthly application, your cat is being exposed to them 12 times every year!

A 2000 study by the Natural Resources Defense Council (NRDC) found the most harmful ingredients to be from the organophosphate (OP) and carbamate pesticide families. These substances are related to nerve gas, interfering with the nervous system's ability to transmit signals. As these older pesticides are phased out, newer ones that are similarly toxic are replacing them. Use caution if you see any of these ingredients on products labeled as "pet-safe":
Some of the newer substances, suspected of contributing to colony collapse disorder among bees, have now been banned in France.

As fleas build up tolerances for pesticides that were effective in the past, newer and stronger ones will continue to be developed. Pesticide-free methods of flea control include frequent vacuuming, including crevices and the areas where your cats frequent, with emptying or disposal of the vacuum bag immediately afterward. Weekly washing of your cat's bedding, and combing your cat daily with a flea comb, will help keep fleas at bay.

Frequent cat bathing may also help. But if you'd rather keep your limbs than attempt to bathe your cat, just be careful when shopping for flea control products and use only those with natural pesticides or repellents like cedar that are specifically labeled for safe use with cats.

To see all the flea control products we have on OldMaidCatLady.com, visit our "Health Time" page under "Products for Cats", or just click here to go there directly.
Posted by Lynn Maria Thompson at 3:27 PM