Is There Hope for Cats With FIP? 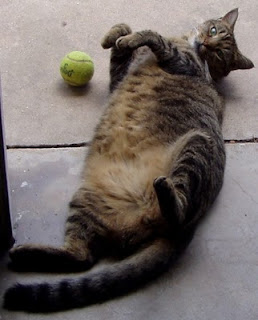 Is There Hope for Cats With FIP?


Frankie, pictured here, was one of those special cats you have only once or twice in a lifetime, those ones who really steal your heart. He loved everybody and was certain that they loved him back...and they usually did. Dog people would say he was "just like a dog," which is something they consider to be a compliment. He was a large cat with beautiful green eyes that looked directly into your soul, strong as an ox, fearless, gregarious, smart and curious. Every time we'd raise the garage door upon driving up to the house, he'd run out to greet us.


When Frankie started sneezing all the time and having runny eyes, we put it off to allergies. After all, it was springtime and there was a lot of pollen in the air. I had allergies, my mother had allergies, so it only made sense that our cat who mainly lived outdoors would have them, too. He'd gotten into a tussle with something that had given him an abscess in his ear shortly before, so we wondered if there was a connection. The vet said that some cats just get chronic upper respiratory infections that are hard to cure. We got used to being sneezed on because Frankie was worth it.

The following spring, he was plagued with terrible stomach upset that the vet diagnosed as pancreatitis. Since he didn't use a litter box, but went outdoors, it was hard to notice at first. But then after he'd eaten we'd see him squatting right in the middle of the yard, as though he had painful intestinal spasms. His vigorous appetite seemed to wane a bit, probably to avoid the spasms he experienced post-mealtime. After a pricey and extended hospitalization, they put Frankie on a special prescription diet we could only buy at the vet's, and said he'd have to stay on it for the rest of his life. We jokingly called him our million-dollar alley cat.

As it turned out, "the rest of his life" would be less than a year. The following Valentine's Day, he went into the third and final stage. He was breathing very quickly and shallowly. Looking down at him from above, he almost looked like a body builder, with an abnormally huge chest and tiny hips. I scooped him up and rushed him to the emergency vet. Since they didn't have his history, they didn't make the connection and had no idea what was causing his condition. They drained his chest cavity of the fluid, put him in an oxygenated box overnight and sent him home Sunday afternoon, but said he was still a very sick cat who needed to see his regular vet Monday morning.

That Sunday night, Frankie was so happy to be home that my mother let him in the house. He laid on his back in my lap and kneaded the air. She even let him do the same in her lap for a few minutes, something my mother never did. But she knew this was probably our last night with him, and she did love him so. Something told her this was the mysterious "FIP" disease, Feline Infectious Peritonitis, that I'd read about online after encountering the term in an article. "Hey," I'd said, "You know, Frankie has had both the symptoms of the first two stages of this disease; I wonder if that's what's been causing all his problems?" My mother thought so, and kept waiting for the final stage to appear. I didn't want to believe it, but she was right. Despite the vet's best efforts, which included a week of hospitalization and a chest tube to drain the fluid that kept accumulating in his chest, our darling little kitty boy died there a week later. He was textbook case of FIP.

Even with all the evidence pointing to FIP, my vet couldn't make a definite diagnosis without running expensive post-mortem tests that we didn't want to do. And that's not his fault. He's a very good veterinarian, but the disease is so mysterious that it's difficult to diagnose. Since it's caused by a mutation of a very common and usually benign feline virus to which virtually all cats are exposed as kittens, most cats would test positive for it, whether or not they actually had it. So there's no reliable test for it. There's no vaccine against it, largely for the same reason. It's as impossible to prevent as the common cold. And even with a correct diagnosis, there's no treatment for FIP. Once the virus morphs into the wet (effusive) or dry form of the disease, it's always a death sentence. Dr. Al Legendre of the University of Tennessee College of Veterinary Medicine says that FIP is the most complex disease he's ever studied.

But more cats are affected by FIP than you'd think. It kills one in 100-300 of all cats under 5 years old. Our Frankie was older, but he still developed it. With over 93 million cats owned as pets in the United States, that works out to a disease that will kill roughly 1-2 million cats in this country alone. Cats who have lived in catteries or shelters are even more susceptible. Frankie may have picked it up while he was a resident of our local humane society. With funding for research into cat diseases lagging far behind that for dogs, however, a cure for FIP has remained elusive.

But hope springs eternal. One drug developed to treat feline herpes virus, which causes an upper respiratory infection in cats, has proven effective in the short term at treating the dry form of FIP in about 20% of cases. It's called Polyprenyl Immunostimulant (PI). But PI is completely ineffective against the wet form, the one that claimed our Frankie. Studies continue on the reasons for this difference, and why it works on some cats and not others. While at the Global Pet Expo last week, I heard of another new drug called T-cyte that was developed to treat FIV and FeLV that has also shown promise in treating FIP.

Want more information? Dr. Legendre will join Dr. Niels Pederson, who directs the Center of Companion Animal Health at the University of California School of Veterinary Medicine, in headlining the 2011 Winn Feline Foundation Symposium in June, entitled WINNing the FIP Fight. It will take place at the Hyatt Regency in Reston, Virginia. While the symposium will be of most interest to veterinarians, anyone may attend. Register online or by calling 856-447-9787.

Nobody should have to lose a beloved cat the way we lost Frankie, and no cat should have to suffer as he did. Until my mother's death five months after his, whenever we would arrive home and Frankie wasn't there to greet us, she would lament, "I miss him every day." Let's hope that new research will soon yield a cure for this terrible disease.