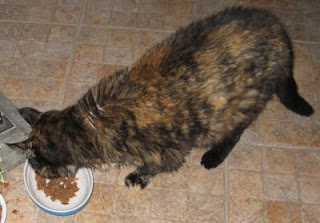 For quite some time now, little Vixen has been eating less and less. She always has an appetite, mind you, but she'll lick the gravy off her food and leave most of the solid parts behind...then yowl for more food! Arranging the leftovers a little differently on the plate will fool her sometimes and she'll lick at it a little more, but not always. For the past few months, I've been throwing away an awful lot of cat food.

This would be bad enough if she just ate the stuff out of the can from the grocery store. But her advanced age of 23 has her on a special kidney diet from Royal Canin that I can only buy at the vet's office. A case of 24 tiny little cans is almost $30. So it hurts to throw away that type of food when the cat won't eat it. She eats from her bowl of crunchies, but just as many of those end up on the floor as in the cat. Smashing her face into the center of the bowl pushes the round little pieces of kibble out the sides and I'm constantly sweeping it up from underneath her food area. (Sigh.)

But when a recent vet visit revealed that Miss Vixen was down to a little over 6 pounds, it was time to do something. I immediately got her some Nutri-Cal, which is one of the few supplements she'll actually touch. (We carry the kitten version of Nutri-Cal on OldMaidCatLady.com, but our supplier of it doesn't stock the adult one, for some reason.) Since her blood work had revealed that everything was within normal parameters, I hesitated to take her off the expensive kidney diet; that could be the very thing that's been keeping her healthy. But I strongly suspected that she was bored with it.

So here's my solution: there are several good brands of premium wet cat foods that are good for senior cats. She's eaten several before from companies like Tiki Cat, Wellness, and others. I bought several of those in tuna and chicken flavors, since those are her favorites. In a mini-food processor I'd bought myself for Christmas, I mix a can of her kidney food, one can (or pouch, in some cases) of the premium wet cat food, some extra water, and some fish oil obtained from puncturing one of the capsules I take daily. The fish oil has an anti-inflammatory property that should help her tender knees to hurt less, just like it helped my finger joints stop hurting. I grind it all up in the food processor until it's the consistency of pablum and keep it in a plastic container in the fridge. A little stir at feeding time mixes the liquid back into the ground-up solid parts so it's mushier than the pate-style canned foods.

So far, she seems to be ingesting more of the solid food, albeit in very small pieces, than she was before. She still has a tendency to lick the food off the plate, but with the finer consistency of it she gets more little pieces into her. She's acting more satisfied, as well and not yowling all day. Time will tell if this approach helps her put weight back on, but for now, it seems to be a good solution!

Have you ever had a cat who was unable to eat because of old age? Share your techniques here for coaxing Kitty to eat more!
Posted by Lynn Maria Thompson at 5:18 PM