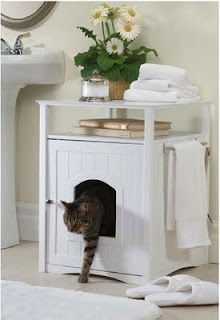 
Got an aging cat? Better keep an eye on kitty's behavior. The litter box is only one of several places to look for signs of kidney disease.

Almost a third of cats over age 10 suffer from chronic kidney, or renal, disease. Long-haired cats and certain breeds may be more vulnerable, as they often have congenitally malformed kidneys. But kidney failure can be caused at any age by bacterial infection, injury, tumors, viral infection, or a protein buildup called amyloidosis. Chronic renal failure (CRF) is a leading cause of death in older cats; I lost my first cat to it when he was about age 11, and my 23-year-old little Vixen has been on a renal diet for years. What causes this, and what can you do about it? Let's explore.

Most of us know that kidneys filter waste material from our bodies, but they do much more than that. Kidneys actually impact five bodily functions:
The kidneys are located on either side, not far below the backbone about midway down the cat's spine. They're, well naturally, kidney-shaped.

Inside the capsule of each kidney and organized into layers called the renal cortex and renal medulla are around 200,000 nephrons, which are tiny structures that act like filters. As kidneys become damaged, kidney cells are replaced with scar tissue. Once this happens, it is impossible for new kidney cells to be created. The kidneys react by producing a larger volume of urine with a lower concentration of toxins. A cat in this stage is said to have "compensated renal failure". Next, the kidneys begin producing less erythropoietin, a hormone that stimulates the bone marrow to produce red blood cells and hemoglobin, so anemia will set in.

In advanced kidney disease, the organs become small, hard and lumpy, their amount of functioning tissue greatly diminished. The symptoms described above will worsen. Only you will know when your cat's quality of life has become so low that it's time for euthanasia. For me, this came when he peed on me twice in the night, both times with no odor in the urine because no toxins were being removed. The next morning, his "third eyelid" began showing on the inner corners of his eyes. It seemed to me like he may have been in the early stages of dying anyway, and that made the decision a little less painful...but it was still excruciating to lose him.

Symptoms of Kidney Problems in Cats

If your cat's kidneys aren't functioning up to par, you'll notice several signs. Unfortunately, since cats are so good at masking illness, symptoms may not appear until about 70% of kidney function has already been lost. Kidney failure may further be masked by hyperthyroidism, which is common in older cats. Look for these telltale signs, although not all cats will exhibit all symptoms:
Any one of these by itself may not be unusual, but if you see two or more, it's time to visit the vet. End-stage symptoms could include convulsions, lowered body temperature, and coma. It goes without saying that catching renal failure early can make all the difference.

Some cats have a higher predisposition to renal failure than others. These include the Maine Coon, Abyssinian, Siamese, Russian Blue, Burmese, and Balinese breeds. Older cats are also more prone to it, while the cat's diet and environmental factors can also play a factor.

CRF: Not The End!

While chronic renal failure is a progressive disease that's always terminal, your cat can live for years beyond initial diagnosis. It will require good management on your part, and kitty won't necessarily like all the treatments. But quality of life will still be pretty good until the very end, so it's worth the effort.

The earlier the diagnosis with CRF, the better the prognosis. If your cat's over about age 7, it's a good idea to have your vet run a series of annual kidney function tests on him or her. One blood test will check the Blood Urea Nitrogen (BUN); normal readings should be 60-80 mg/dl. When it's double that, kidney damage is evident. A second will check for an elevated level of creatinine, while a urinalysis checks the urine's specific gravity (USpG). A USpG reading below 1.030 could indicate that at least 2/3 of the kidney tissue is damaged. Your vet may also want to measure the blood levels of elements like potassium, phosphorus and calcium, as well as the counts of red and white blood cells to determine how far any disease may have progressed.

Once diagnosed, treatments vary depending on the causes of the CRF and how far it has progressed. Water intake should be encouraged with additional bowls, pet fountains, or adding extra water to the cat's food. There are drugs to help with the anemia symptom by stimulating bone marrow production, while phosphate binders can help prevent further kidney damage. Some say that restricting the amount of protein in the cat's diet, mainly for the phosphorus in it, is important, but others disagree and say a higher-protein diet is best. Your vet will likely put kitty on a diet of prescription cat food, often referred to as a "renal diet". Some cats do well on this, while others refuse to eat it; if yours won't, it's much more important to feed him something that will help maintain weight and good body condition. Weight loss is the enemy, and high moisture content is more important than protein content. Potassium supplements may also be necessary and both Omega-3 fatty acids and antioxidants have proven helpful. Supplements of vitamins B and C should be given daily. Some cats will show an improved appetite when given anti-emetics to combat their nausea. Others may need drugs to lower their blood pressure, as hypertension can be a result of poor kidney function.

In more advanced progression, you may also need to give your cat subcutaneous fluids daily to prevent dehydration. It's impossible for the cat to drink enough water to meet the demands of her compromised kidneys. Fluids will help flush toxins from her system and make her feel much better. The fluids are administered by pinching up a section of skin and inserting a needle into it, then keeping the cat still while saline solution drips from an IV bag for about five minutes. Afterward, she'll feel "sloshy" underneath the chest, as the fluids will gather there and be absorbed by her body as needed.

While none of these treatments will prevent eventual kidney failure, they can help your cat continue to live comfortably for months or even years beyond initial diagnosis. Consistency and vigilance are critical.

Worth a Pound of Cure


Obviously, preventing kidney failure in your cat is the preferable route. Several steps can be taken to promote kidney function, or avoid doing damage to the kidneys. They include:
While there are no guarantees and not every disease is preventable, by keeping your cat safe and healthy you can help ensure many joyous years with a cat who has well functioning kidneys.

Many thanks to the Feline CRF site, All About Cats, and the Feline Advisory Bureau, all listed on OldMaidCatLady.com's links page, along with numerous other omnibus Q-and-A sites, for information contributing to this post.
Posted by Lynn Maria Thompson at 6:41 AM