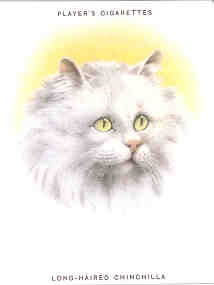 One of the newest suppliers we have on OldMaidCatLady.com sells groups of reproduction cigarette cards depicting cats! You can get the cards in various groupings, depending on the amount of wall space and your décor. But what’s the story behind these little miniature pieces of art? Picture cards are actually interesting glimpses of history.

In today’s American society, it’s hard to believe that smoking was once so popular, but there was a time when virtually all men smoked, and plenty of women did so in private, as well. British and American tobacco companies began placing collectible cards in packages of cigarettes in the late 1800s. The practice was an effective marketing tactic that became popular worldwide.

The tiny cards were similar to the baseball cards kids collect from packages of bubble gum, but the subjects went way beyond sports stars. They featured military generals, thoroughbred horses, fish, songbirds, fruits, automobiles, flags, movie stars, ships, gangsters, historic homes...you name it, there was probably a series of cards depicting it! Posters in tobacco stores promoted the various series to shoppers. Collectors’ albums tying in with each theme, into which the cards could be glued, could also be ordered from the companies.

Some of the originals of the reproductions we feature were made for British company John Player & Sons, more commonly known as simply “Player’s”. This company was one of the first to offer pre-packaged tobacco. Before that time, people bought dried tobacco leaves loose from tobacconists and rolled their own cigarettes. Player’s was also one of the first companies to offer picture cards in their packs of cigarettes, generally in sets of 50 that smokers would collect one at a time.

While some cigarette cards were photographs, some were lithographs; others added a special type of ink that would give the subjects particular qualities -- for example, silver ink might be used to depict scales on fish. The cat collections are some of the rarest around, so you’re not likely to find originals for sale very often. The cat head portrait collection dated from 1936. Two other collections we feature depict full-bodied portraits of cats, some portrait style (taller than wide), and some landscape (wider than tall).

Companies stopped producing cigarette cards in the 1940s, to conserve paper during World War II. Collectible cards remained in only non-tobacco products like baking soda and chewing gum until R.J. Reynolds re-introduced some for their Doral brand of cigarettes in 2000.

Many of the original cards are traded on sites like eBay. They’ve become quite popular collectibles, and are graded for value by several collectors’ organizations. While a lot of them are very affordable, rare cards sell for much more. The most expensive cigarette card (so far) sold for $2.8 million in 2007! Many collectors keep them in specially made plastic sheets that fit into three-ring binders or individually in semi-rigid plastic savers. There are even magazines called The Wrapper and Non-Sport Update where collectors can read all about their cards and network with other collectors to buy and sell.

The cards we’re featuring are reproductions of these old collectibles, but are every bit as beautiful. They’ll also hold up better than the originals, and are mounted in acid-free mattes to help preserve them. They arrive ready for you to frame to your taste. You’ll love to add them to the walls of your home’s den, library or living room!

See our collections of cats on reproduction cigarette cards here. The cards come in sets of 6, 9, 12, and 20, mounted, matted & ready for framing.

Posted by Lynn Maria Thompson at 7:42 AM