The Horror of Rabies 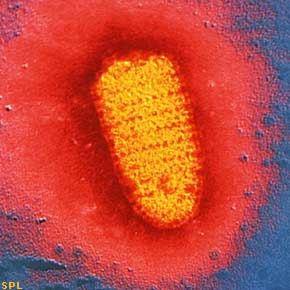 The Horror of Rabies

Most of us remember seeing horror movies with rabid dogs chasing frightened villagers, or perhaps the heartbreaking scene in Old Yeller when the family dog must be shot after contracting rabies. But dogs aren't the only pets who can get rabies; your cats, and even you, can get it! Here's what you need to know to stay safe.

Rabies is caused by a virus in the Lyssavirus genus that can attack all mammals. It's most often transmitted by the bite of an animal who has contracted it. Wild mammals like raccoons, skunks, bats, and foxes represent the vast majority of cases reported to the Centers for Disease Control each year, mainly because these animals haven't been vaccinated against it. Interestingly, small rodents, including squirrels, rats and mice, almost never contract rabies.

This disease has been with us for a long time, too. Instructions for rabies prevention, along with fines imposed for the owners of rabid dogs who bit other humans, are found in the Codex of Eshnunna in Mesopotamia around 1930 BC. Rabies was a particular problem in 1800s Europe, where more people were living closely with dogs. Primitive attempts at inoculation were made by "branding" dogs with a special object after cauterizing a bite wound with it proved effective in preventing the disease in one dog.

After an animal has been bitten by another with rabies, the virus travels to the brain through the peripheral nerves. Mild flu-like symptoms may occur. After a short incubation period, the central nervous system becomes infected. The virus rapidly replicates itself in the brain, where the blood-brain barrier prevents anti-viral immune cells from entering to stop it. The brain and spinal cord swell with the disease (encephalitis) and the animal will die from it, usually within a few days.

Symptoms of rabies, once it has incubated, include cerebral dysfunction, growing anxiety, confusion, abnormal behavior and fear. These behavioral changes take place over a one- to three-day period known as the prodromal stage.

In the second "excitative" stage, the animal will become more aggressive, hallucinating and overreacting to any stimuli. This is when the danger of biting is most severe. From the central nervous system, the virus travels into all the other organs, and can be found in high concentrations in the salivary glands. This leads to the foaming of the mouth so associated with rabies, and is one of the reasons for transmission through bites. The virus also causes the tear ducts in the eyes to overproduce tears.

By the third, paralytic, stage, partial paralysis sets in as the motor neurons of the body become damaged by the virus. Rear leg paralysis will cause the animal to stagger and stumble. Drooling and difficulty swallowing result from paralysis of muscles in the face and throat. Unless euthanized first, the animal will die when the respiratory muscles become paralyzed and it can no longer breathe.

Luckily, this horrible disease is completely preventable. The vaccine for it was invented in 1885 by Louis Pasteur and Emile Roux. Most cities require that pets be vaccinated annually for rabies, and some are even using a recombinant vaccine successfully to inoculate wildlife by putting it in baits. And yet, there are still one or two people every year who die from rabies in the United States. Most deaths from rabies worldwide occur in Asia and Africa.

Some veterinarians are encouraging their patients to get a newer rabies vaccine that lasts for three years instead of the traditional one year. However, this vaccine has been linked to an increased incidence of cancerous tumors at the injection site, and is no longer recommended by veterinary experts.

If you or your cat are bitten or scratched by an animal suspected to have rabies, it is critical that the wound be thoroughly washed as quickly as possible with a solution of water, soap, and povidone iodine to kill as much of the virus as possible. The suspected animal should be safely captured and held for rabies testing. If you are the one bitten, you should seek immediate vaccination or administration of rabies immunoglobulin to kill any of the virus in your system. The incubation period for a human can be up to a year, so you're not necessarily safe if you don't develop symptoms within a few days. Better safe than sorry!

To protect your cats from exposure to rabies, don't let them roam outdoors, where they will encounter other animals (domestic or wild). Get them vaccinated for rabies annually, whether or not your city requires it. And if they do get outside, get any wounds cleansed as soon as you find them to minimize all types of infection, not just rabies.

With rabies so well controlled for more than a generation, it's easy to forget that it was once a serious threat to public health, as well as animal welfare, in our country. But the virus still exists. All it takes is getting too comfortable and neglecting proper precautionary measures to allow it to regain a foothold. Don't let your cat become a rabies statistic!
Posted by Lynn Maria Thompson at 2:09 PM