Do You Train Your Cat? 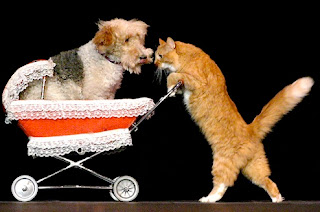 Do You Train Your Cat?

Actually, yes! Cats are actually more intelligent than dogs, with almost twice as many information-processing neurons in their brains. Since dogs can be trained, it stands to reason that cats can handle it. A recent article in Pet Product News explained:

Cats can be taught not to spray, to learn to use a litterbox, to be less shy and more accepting of people, not to scratch the furniture, and to accept other cats - and even dogs - in their household. Cats can be trained to ride comfortably and with less stress in a cat carrier.

We've all experienced problems arising from what we deem to be "bad" cat behavior. And we've all tried to change it. Most people believe that cats don't have the same motivators as dogs. People believe that dogs are constantly wanting to please us, whereas cats are more concerned with pleasing themselves. Many would go so far as to say that the cats actually train us to serve them.

But in reality, all animals (even people) respond to training systems that reward them and avoid those that punish them. Cats aren't any different in this respect. The key is to uncover what they find rewarding.

If you learned about Maslow's Hierarchy of Needs in school, you're familiar with the concept that people first seek to satisfy their basic needs for food, clothing and shelter, then seek higher stimulation up through self-actualization. Cats are similar. Once a cat's basic needs are provided (food, shelter, a clean bed, a potty, somewhere to scratch), he needs intellectual stimulation. Bored cats can mean trouble. You may have even been to shows featuring trained cats doing tricks, like the one shown above. Those cats are certainly no smarter than yours!

So, what types of rewards are pleasing to cats? What tools are useful in training them? The most effective cat training reinforces the bond between you and your cat. Positive methods of reinforcing good behavior are always preferable to punishment for bad behavior. Here are a few suggestions for kitty rewards:


Well, duh; who doesn't? That's a pretty basic desire. You know how the cats come running when you turn on a can opener, even if they've never in their lives eaten food that had to be opened with one. Where did they learn that behavior?

Slipping your kitty a treat when he does something you want him to is a great way to get him to replicate that good behavior. What's more, just as with dogs, you can transfer those positive feelings to a clicker and use it to reinforce the behavior in the future. Start doing that and you'll see quick results.

When watching an episode of Jackson Galaxy's "My Cat From Hell" show on Animal Planet, I was struck by a video at the end of the show. It was the episode where Jackson gave a Cat Wheel to City Kitty so he could work off some of his energy instead of directing toward attacking the couple's other cat. In the video, City started playing with the wheel, but when nobody was around to watch him, he stopped and looked very disappointed.

Few of us realize that our cats are like kids on the diving board at the pool, always saying, "Watch me, Mommy!" They want us to pay attention to them: give them a little cuddle, play with them, talk to them, watch them play, interact with them in some way. Why else do they sprawl across our computer keyboards or the paperwork piled up on our desks? They know where we tend to focus our attention, and they want us to transfer it to them. If doing something bad gets our attention, they're getting "rewarded" with what they want, and we're actually reinforcing bad behavior! Try ignoring them instead and see if that doesn't work better as a behavior modifier.

While some cats are "lap cats" who love to be cuddled, others aren't as physically affectionate. Your cat may like for you to watch him, or want to sit next to you, but not be held or petted. Some cats, especially older ones, get a touch of vertigo when lifted off the floor, and very few cats like to be moved somewhere if they're not in control of the motion. Some cats like prey toys that fly, while others prefer the kind they can bat around themselves. So experiment to find the best way to interact with your cat and spend that quality time together every day as his little reward. It's a great motivator!

Both cats and dogs have a stronger sense of smell than ours. And they communicate with each other through the pheromones excreted by their bodies. Pleasant scent-based products like Feliway, honeysuckle, or any kind of catnip can be a motivator for cats.

Just as with people preferring various perfumes, different cats like different scents. So experiment to find the ones that your kitty prefers. Watch how he responds to a variety of fragrances. Then use them in areas where you want to encourage the cat to hang out or play, or as a calming influence in sleeping areas, or even as a repellent if he doesn't like them. When you start speaking a cat's scent language, he can't help but respond!

You've seen how your cat gets fascinated with something he can't figure out. Highly intelligent creatures, cats enjoy learning new things and solving puzzles. It's why they're so playful, and why they love surprises. This also makes them curious about their environment, so that they will enjoy walking on a leash and harness once they get used to the feel of it.


If you live in a neighborhood without free-roaming dogs, you should be able to safely take your cat for a walk around. Cats would naturally patrol their territory every day in the wild, so walking around the neighborhood is a very natural outlet for this instinct. It's not the same as walking with a dog; most cats like to stop and sniff everything. It's how they find out what's going on in their feline world. Just have some patience, maybe take along a book to read if you have to, and let kitty explore. Satisfying that curiosity is a wonderful reward that your cat will look forward to every day.

Cats can be trained to do tricks, as well. Most people don't realize this because the assumption that cats can't be trained causes them never to even try. In the meantime, their cats are lying around, bored and getting diabetes from obesity, or becoming aggressive or destructive to their home. What a shame! Just invest a little time and effort, discover what motivates your cats, and you'll find much reward. Happier, more well-adjusted cats mean a more harmonious home...and less cats dumped at shelters for "bad" behavior.

For guidelines on training cats in specific areas, Cat Training is a website developed by a veterinarian that provides a breakdown of various things you might want your cat to do. And check out the Cat Training Aids section of OldMaidCatLady.com to find tools to help you. Patience and consistency are important; it won't happen overnight. But don't just write off your cat as incorrigible, thinking he can't be trained! He can, and it's up to you to try.
Posted by Lynn Maria Thompson at 5:53 PM

Email ThisBlogThis!Share to TwitterShare to FacebookShare to Pinterest
Labels: can cats be trained, cat training, how to train a cat, train a cat