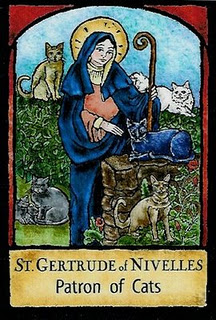 St. Patrick may steal the limelight on this day, but it's also the feast day of St. Gertrude of Nivelles, patron saint of cats!

Saint Gertrude lived from 626-659, and was the abbess of the Benedictine monastery of Nivelles, in modern Belgium. She was a true "old maid cat lady"... or at least the old maid part!

The daughter of Pepin I of Landen and Saint Itta, Gertrude's older sister was Saint Begga and her older brother would become Grimoald I. These names have special significance to me, as they showed up in one of the lines of my own geneaology.

When St. Gertrude was only 10 years old, her father asked her to marry the Duke of Austrasia, as was often done to ally kingdoms in those days. The little girl indignantly replied that she would marry neither him nor any man, as Jesus Christ alone would be her bridegroom.

Several years later, after her father died, Saint Begga erected a double monastery at Nivelles and appointed Gertrude as its first abbess. The doting mother remained at the abbey as a nun to advise her teenaged daughter. By the year 646, Begga determined that her daughter, now 20, was sufficiently mature to lead the abbey without her guidance. Said to be gifted with visions, Gertrude was known for her hospitality to pilgrims and aid given to Irish monks. The monastery at Fosses exists because of her gift of the land for it. She also had a great devotion to souls in Purgatory, which are represented by mice in symbolism, so she is often depicted with mice.

Gertrude lost her mother when she was 26. She studied the Holy Scripture extensively and knew it almost by heart. On the extensive property left her by her mother, she built more churches, monasteries and hospices, working so tirelessly that she often neglected to eat or drink. Appointing her niece as successor, she resigned from her office leading the abbey at age 30. Remaining in study and prayer, she died at age 33 during Holy Mass on March 17, as had been prophesied the day before. Immediately thereafter, she was venerated as a saint and a church was erected in her honor.

In addition to cats and those who love them, St. Gertrude is the patron saint of the towns of Beverst (Belgium), Geertruidenberg and Bergen-op-Zoom, of travelers in search of lodging, gardeners, and herbalists. Her name is invoked to stave off fever, insanity and mental illness, rats, mice, and the fear of rats and mice. She is also invoked to protect those who have recently died, so that on their three-day journey to the afterlife they will spend their first night under her care and their second with the Archangel Michael.

So while you're hoisting a flagon of green beer to honor St. Patrick today, have an additional one in honor of St. Gertrude!
Posted by Lynn Maria Thompson at 9:41 AM