Cat on the Titanic? 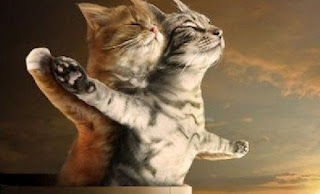 It was 100 years ago that the "unsinkable" RMS Titanic sank in mid-Atlantic on its maiden voyage, taking 1,500 people with her. If you're not Titanic-ed out by now, I wondered if there were any cats aboard the ill-fated ship.

There is a children's fiction book called Kaspar, The Titanic Cat. It tells the tale of a cat taken aboard by a boy who stowed away. But in fairly extensive research on the Titanic for a novel I was writing at one time, I have never come across any stories of cats actually being aboard. This is unusual, as most ships keep cats aboard to control rats.

A story is told in a book called Ghosts of the Titanic about a stoker named Mulholland who observed a mother cat the crew had named Jenny carrying her kittens off the Titanic onto the quay at Southampton.  She had just given birth to the kittens earlier in the month. Surmising that the cat knew something everybody else didn't, he decided not to continue on the trans-Atlantic journey and disembarked himself, thus saving his life. Others claim to have seen Jenny aboard once the ship sailed from Southampton, so her fate is uncertain.

Some say there was another cat kept in the engine rooms to control rats that went by the name of Mouser, but there is no official record of such a cat.

So if the only cat commonly accepted as having been aboard the ship ran off it before Titanic left England, that means there were none aboard at the time of the sinking. 14 dogs were on board, three of which were rescued. There was even a dog named Kitty that belonged to John Jacob Astor. She was an Afghan hound and did not survive. But nowhere could I find confirmation that there were any cats aboard the ship at the time of the sinking.

In addition to their usefulness in controlling rats, cats aboard ships are considered to be good luck. So it begs the question: if a cat had been aboard the Titanic, would the ship have made it to New York safely? Certainly something to think about!

Email ThisBlogThis!Share to TwitterShare to FacebookShare to Pinterest
Labels: cats on the titanic, kaspar the titanic cat, titanic cats