Protecting Your Cat From Heartworms 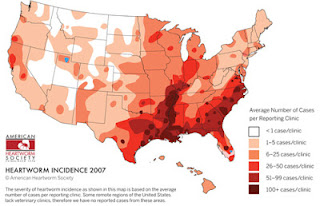 Did you know that there was an American Heartworm Society? Neither did I, until I saw a press release about April being National Heartworm Awareness Month. Their map, above, shows where cases of heartworms are most reported throughout the United States. Obviously, they're a bigger problem in the southeast, but can strike cats and dogs almost anywhere. So let's take a closer look at heartworms and how you can protect your cat from them.

In dogs, heartworms (Dirofilaria immitis) were discovered over 100 years ago. They were first mentioned as affecting cats in the 1920s. The only way they can be spread between animals is by mosquitoes. When biting an infected animal, the mosquito takes in larvae that have been released into the bloodstream by an adult female heartworm. It takes a couple of weeks for these larvae to mature within the mosquito. Once they reach the infective stage, they enter another animal through the mosquito's bite wound.

When the larvae enter your cat's bloodstream, it could take them several months to reach maturity. During this time, your cat may appear to be completely healthy, or exhibit some respiratory symptoms.  The symptoms mimic many other diseases in cats. Early stages, while the worms are first infesting the pulmonary blood vessels, may cause symptoms similar to feline asthma or bronchitis, with coughing and difficult or rapid breathing. This is a newly defined syndrome known as HARD - Heartworm Associated Respiratory Disease. During this time, less than 20% of cats will show HARD symptoms and blood tests for the heartworm larvae may not be consistently positive, so diagnosis is difficult.

Amazingly, some of our kitties can spontaneously rid themselves of heartworms! Only 61% to 90% of cats bitten by an infected mosquito actually develop the worms, versus 100% of dogs. While cats who live outdoors are more often bitten by mosquitoes, even indoor-only cats can be bitten if a mosquito gets inside your house, so all cats are at risk.

Within 7-8 months from the original mosquito bite, your cat could have from one to three adult worms living in the heart and pulmonary blood vessels. While dogs with heartworms can be treated, once the worms have infested your cat's heart, there is no treatment on the market to get rid of them. As the worms grow in size, your cat will start vomiting and gagging, become lethargic, and lose weight. The heartworms live for 2-3 years, and they may be fatal to your cat. Any mosquitoes that bite kitty during this time will then carry the larvae of those worms on to infect other cats, and the cycle continues.

Fortunately, none of this is necessary, as heartworms are preventable! Daily or monthly tablets or a monthly topical solution are available from your veterinarian to protect your cat from heartworm infestation. Four options are currently approved for use in the U.S. They work by interrupting the larvae's development so that they can't grow into mature worms.

We're having an early spring this year, so mosquito season will likely begin early. Make sure your cat is protected from heartworms by making a visit to your vet and getting your cat on a preventative medication. If you'd like to read more about heartworms, visit the American Heartworm Society's website.

Posted by Lynn Maria Thompson at 7:18 AM