How to Hug a Cat 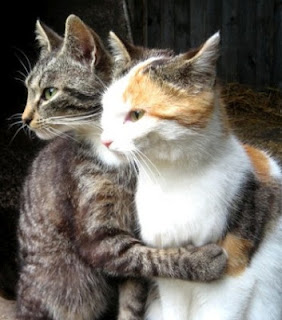 How to Hug a Cat

Do you hug your cats? Not all of them like it...at first.

When I started hugging my cats, they resisted, not liking the restraint.  But I'd persist until they'd break out of the hug, walk away from me, then circle back around, their body language saying, "Do it again!" I'm trying to get the kittens accustomed to being hugged from an early age.

Toward the end of little Vixen's life, she didn't like to be up off the floor because she got dizzy. But during her last couple of weeks, I'd pick her up and put her in my lap, pulling her close to my body and giving her a little squeeze. She purred as loudly as she ever has for anything.

So here's my method for cat-hugging that has become popular with every cat I've tried it on:

That's it! Now, get to hugging, because it's National Hug Your Cat Day today!
Posted by Lynn Maria Thompson at 12:12 PM