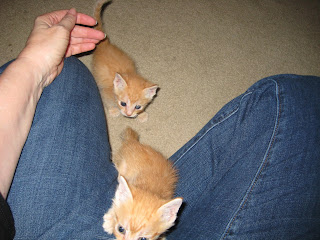 May 6-12 has been dubbed National Pet Week in the U.S., so let's celebrate the joy that our cats bring us! This year's theme is "Healthy Pets Make Happy Homes."


As many of you know, I recently began fostering two little 4-week-old kittens, who I will adopt as soon as they're old enough. They just turned 6 weeks old and had their latest round of shots, weighing in at 1.1 pounds each. That's them, pictured at the top of this post, on the first day I brought them home. I've been calling them Captain Roughy and Gilligan, and they are certainly a handful! Adult cats are really more my speed, but after losing my beloved little Vixen, it was just too difficult to come home to an empty house with no little furry face to greet me. I intended to help out the shelter by fostering some of the many kittens they get at this time of year, and just fell in love with these two.

"My boys" already have great plans in store for them. Having never lived with kittens this young before, I'd never really had the opportunity to start them out right by teaching them to get used to walking on a leash and harness, or having their teeth brushed. Now they can get a good foundation in life and we will learn from each other how best to raise them. Will they excel at cat agility trials, or would they prefer to become therapy cats who visit the sick and elderly? Or will they just become twin fixtures lounging atop the back of my sofa? Only time will tell. Whatever they become, I'm looking forward to shepherding them on their journey there.

Purrs, and happy National Pet Week!
Posted by Lynn Maria Thompson at 6:00 AM