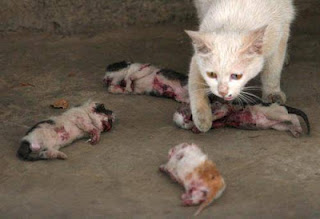 Images like the one above are so hard to look at. But it's important to be aware of the evil in the world that would do harm to such gentle creatures as our feline friends. This poor mother was distraught when presented with her litter of kittens that had been mutilated to death in China. Who could do such a horrible thing to a defenseless animal?

And yet, this type of thing goes on daily all over the world. According to Pet-Abuse.com, cats are second only to dogs in the number of U.S. abuse cases reported, with 3,317 cases of cat abuse reported from 2000-2010. There were 978 convictions involving cat abuse, with another 1,063 alleged and 731 still open. They report the most common types of abuse in all animals as:

Now for some really disturbing stats: in cases where the animal was intentionally bound -- that is, where its legs or mouth were tied up by the abuser -- 26% of the cases involved mutilation or torture, 18% involved neglect or abandonment, 11% beating, 7% choking, strangulation, or suffocation, another 7% vehicular injury, and 6% shooting.

So all types of animal abuse are happening all over America. And that's not even getting to many third-world countries where cats are routinely killed for sport, food, or poaching. Yes, it's depressing. But turning away from the ugliness does nothing to stop it.

Fortunately, there are steps we can all take to stop animal abuse. Not everybody can do everything, but if we each do what we can, it will go a long way.
Did you know that only 47 states consider animal abuse to be a felony crime? Even those that do consider it a felony don't necessarily have lengthy sentencing guidelines for those convicted. And yet statistics have shown that most serial killers began by abusing animals. Intentional abuse of animals is associated with sociopathic behavior. Until this crime is taken seriously and abusers punished appropriately, the cycle of violence will continue.

Yes, animal abuse like that shown above is disturbing to see, and the temptation to turn away from it is great. But only by facing the problem can we stop it. Once awakened, we can no longer turn away.
Posted by Lynn Maria Thompson at 6:00 AM