An Up-Close Look at Rabies in Cats 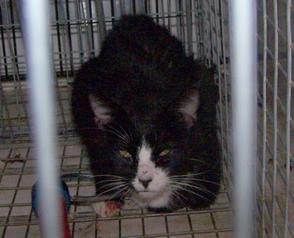 "Could That Cat Have Rabies?"

Summertime brings multiple news reports of rabid cats in communities all over the country. While rabies can occur at any time of the year, there do seem to be more cases in summer.

But how can you tell whether a cat you encounter has rabies? If you care for feral colonies, spend time in wilderness areas, or live in an area where cats tend to roam outdoors, you could come into contact with a rabid cat.

Here are 18 symptoms to look for that would indicate a cat is suffering from rabies, listed more or less in order of progression of the disease:

Once symptoms begin, the disease progresses quickly and nothing can be done to save the animal.

How Rabies Affects A Cat's Body


The rabies virus, a member of the Lyssavirus genus of the Rhabdoviridae family of viruses, is transmitted by the bite of an infected animal. Since all mammals are at risk, it can spread rapidly through wild populations of raccoons, foxes, skunks, coyotes, and bats. Fortunately, both humans and cats are less susceptible to the disease than are these wild animals...although neither are immune.

Rabies kills by affecting the grey matter of the brain and the CNS. When the virus first enters the cat's body through the bite wound, it replicates in the muscles around the wound. From there, it spreads to adjacent nerve tissue. It then travels via fluid through all types of nervous fiber, including peripheral, sensory, and motor nerves, to the spinal cord, and from there to the brain. Once there, it begins binding itself to the brain's nerve cells, resulting in the symptoms described above. It also causes acute encephalitis, or swelling of the brain. From there, the virus continues traveling to other organs through the body's nerve cells.

The rabies virus is heavily present in an infected animal's saliva, since this is how it spreads to another animal. However, it does not live long outside a host and being exposed to an infected animal's saliva, blood, or feces by themselves are no guarantee of infection. If an animal has died of rabies and another animal breathes the fumes from its decomposing carcass within 24 hours, there is a possibility (albeit slim) of rabies transmission. There have also been reports of rabies being transmitted by inhalation in a cave where numerous rabid bats were living, but these instances are extremely rare.

Always fatal once contracted, rabies is completely preventable. Make sure your cat is vaccinated for rabies starting at about 4 months old, with annual boosters required for the vaccine to remain effective. While there are rabies shots available that last up to 3 years, there appears to be a connection between these vaccines and cancerous tumors at the site of injection, so annual boosters are likely healthier for your cat.

Keeping proper records of your cat's vaccination could actually save your kitty in another way. If your cat attacks or bites someone and no proof of rabies vaccination is available, your cat will be euthanized for rabies testing. A definitive diagnosis of rabies can only be made by testing the brain of an animal for the virus during autopsy, so it is necessary to euthanize the animal to do this test. Proof of current rabies vaccination will spare your cat from this fate.

Community, or feral, cats managed in Trap-Neuter-Return (TNR) programs should also be vaccinated while being spayed or neutered. This way, it is known that ear-tipped cats are more likely safe from rabies infection. Many feral cats don't live long lives, so a multi-year rabies vaccine may be sufficient to protect them for life. If you manage colonies of cats, you may also talk to your doctor about receiving a prophylactic rabies vaccine for yourself.

Obviously, if you encounter any animal that appears to be rabid, avoid contact with it. It's always better to keep your distance and observe the animal rather than to try handling it. If you can safely contain and quarantine the animal, do so, but do not put yourself or your own cats in danger. Call your local animal control office so that someone who has the necessary equipment to handle the animal can come out to trap it and hold it in quarantine, or have it euthanized for testing. This is automatically done with a wild animal, but a pet will more likely be quarantined for up to 10 days to observe for additional symptoms first.

If you or your cat come into contact with a rabid animal, immediate action is necessary. People bitten or scratched by a rabid animal need to receive a series of injections to prevent catching the disease. Thoroughly wash the wound for several minutes with soap and water, then get to the doctor. Even if your cat has been vaccinated, if a rabid animal attacks your kitty a booster should be given by your veterinarian as soon as possible after exposure to the disease. Once your cat starts exhibiting the symptoms of rabies, there is no cure for the disease and euthanasia is the only option available.

Rabies is a tragic disease and it is pitiful to see any animal affected by it. Summer is when more cases tend to appear. So it's important to know what symptoms to look for, and to be proactive in protecting yourself and your cats from this terrible virus.
Posted by Lynn Maria Thompson at 1:01 PM

Email ThisBlogThis!Share to TwitterShare to FacebookShare to Pinterest
Labels: cat rabies, effects of rabies on a cat, how to tell if a cat has rabies, rabies in cats, symptoms of rabies in cats