Have You Added A New Cat Recently? 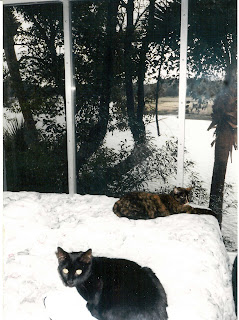 Introducing a New Cat to Your Home

Shelters have been bursting with cats after a busy kitten season this spring, so many of us are introducing new felines to our household. But how does this affect the existing cats in our homes?

Many years ago, after I'd adopted my first cat from the local Humane Society, he seemed to be suffering from great separation anxiety when I went to work. A lady I worked with had a long-haired tortie she was trying to rehome for much the same reason, so I agreed to take her. She was called Sam, short for Samantha, and she was a beautiful girl.

I'd been told that cats need some time to adjust to each other when first introduced, so I gave them a week or so to work out who was boss, enduring the hissing, "squeaky-door" growls, and such. But while trying to move the new kitty over a bit in the windowsill one day, I felt something under her tail that only became worse upon further inspection: there was poop all matted into her hair because my big boy wasn't even letting the poor thing use the litter box!

That was it; this match was not to be. I had to cut out the poop from her long coat and give Sam a good bath. Then I called my co-worker to let her know it was not going to work out. But I didn't give up on Sam -- in putting out feelers among my network of friends, I found a friend of a friend who wanted her. Within a few weeks, this poor, timid cat who couldn't even relieve herself in my house was the queen of her new household, with a little boy for a companion who loved grooming and doting on her. The friend who had connected us reported that Sam's entire demeanor had changed. I was so happy for her, as she had a home where she could get the attention she craved, without being pushed around by another cat.

When I moved from that apartment a few months later, I'd decided to take in the stray cat I'd been seeing around and take both cats to the new place together, so there would be no invasion of anybody's space. While my boy-kitty also attempted to intimidate her, she was having none of it. She wouldn't hesitate to give him a good swat, claws unsheathed, and he learned quickly to keep his distance from her. That stray turned out to be my beloved little Vixen, my companion for 23 years until her death in April...so there's an introduction that worked out pretty well! They are the two cats pictured above, at the top of this post.


Only one other time did I try introducing another cat to my home, and that was when I'd found a young kitten, probably about 3 months old, at the bottom of the stairs leading to my apartment. He insisted on following me to the parking lot and I was afraid he'd get run over there, so I scooped him up, ran back upstairs, and tossed him in the door, running late for choir rehearsal and unsure of what to expect when I returned.

That kitten seemed to get along fine with the other two, although I did feed him separately. He was a delightful little fellow who found a home with another friend of a friend who just adored him. A recent news article told another story about a couple who weren't as successful in introducing a new cat to their home.

When introducing a new cat to your existing feline companions, there are a few steps you can take that will make it easier.

Adding a new cat takes time and patience. But hang in there. Within a month or two, you should have a happy household, blessed with cats....plural!
Posted by Lynn Maria Thompson at 12:00 PM

Email ThisBlogThis!Share to TwitterShare to FacebookShare to Pinterest
Labels: adding a new cat, adding another cat, bringing a new cat into a home with cats, how to introduce a new cat, introducing a new cat