The Joys of Kitten Parenting 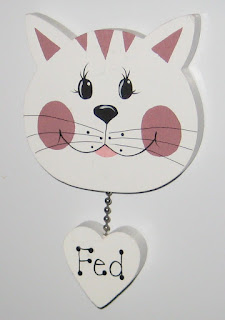 Several years ago, I found the above little refrigerator magnet that has the little heart you can flip over that says "Fed" on one side and "Not Fed" on the other. Can't say that I've ever used it to remember whether or not the cats have been fed, but it's cute.

Captain seems to enjoy jumping up to bat the little dangly part around, so I've moved it a little lower on the refrigerator so he can stand up and reach it. Naturally, he won't do it any time I have a camera handy, so all you get to see is the magnet on its own. This evening, I'd fed them their canned dinner and then fixed my own dinner. The last time he was playing with it, he'd left the sign on "Not Fed."

While eating dinner, I heard Captain just batting the heck out of that thing, and when I looked again it was still on "Not Fed."

"Why haven't you changed it?" I joked with him. "You've gotten your dinner."

Then I looked at their crunchy dish, and it was almost empty. So I reached into the crunchy bag, scooped out a cupful and filled it up again. Captain went right over to that thing and batted at it again...and flipped it over to "Fed." Don't tell me that my Golden Boys aren't smart.

Next task: build them an agility course and get them running it!
Posted by Lynn Maria Thompson at 8:59 PM