Does Tick Protection Matter for Cats? 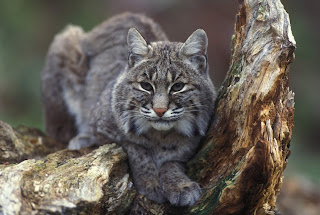 Most of what we hear about ticks has to do with a dog running through the woods and picking up a tick that brings something like Lyme disease back to their family. And most tick prevention products are bought for dogs.

But there's reason to be wary of ticks on cats, and it comes down to two words: Bobcat Fever.

What is Bobcat Fever?

Caused by a protozoal organism known as Cytauxzoon felis, bobcat fever affects not only our kitties' wild cousins, but can be deadly to our domestic feline companions. A hopeful survival rate for the disease in domestic cats is only 60%.

First discovered in 1976, the disease seems to be spreading from the southern part of the United States into more central and northern states. Unneutered male cats, along with very young cats, those under extreme stress, or with a compromised immune system appear to be most susceptible to infection, although it can strike any cat.

The disease got its name from the wild bobcats that most often carry the organism in their bodies after infection by a tick bite. Oddly, it doesn't typically make bobcats ill, they are mere carriers for the protozoa that cause it. A tick that bites an infected bobcat then passes the protozoa to its offspring, which could number in the thousands. Two types of ticks, the Lone Star Tick (Amblyomma americanumm) and the American Dog Tick (Dermacentor variabilis) transmit it to other cats. Cats cannot transfer bobcat fever to other cats directly; it only spreads by the bite of an infected tick.

The organism that causes the fever reproduces asexually in an infected cat's white blood cells. These protozoal cells then clog tiny blood vessels in the liver, spleen, lungs, and lymph nodes that allow blood to enter the veins and return to the lungs for oxygenation. As the protozoal cells divide and multiply, they attack the cat's red blood cells. At this stage of the disease, signs of the organism can sometimes be seen by viewing a blood sample under a microscope...but not always.

Two different cats may have completely different outcomes when exposed to bobcat fever. While many have died, others survive and may even become carriers for the disease that show no symptoms but will test positively for it and can transmit it to other cats if bitten by a tick. There is no risk of its transmission to humans or any non-feline pets in the household.

What are the Symptoms of Bobcat Fever?


Since domesticated cats are outdoors (where the ticks that carry the fever live) more in spring and summer, the disease tends to show up more in those seasons. Right now is prime time for its appearance. Be alert for these symptoms if your cat goes outdoors into woody areas where ticks may thrive.

A cat may appear completely healthy before suddenly being stricken with bobcat fever. Within 5 to 10 days, or even up to 20 days after the tick bite, your cat may become lethargic and have no appetite. A high fever will be present at first. During this phase of the disease, the protozoa are attacking blood vessels in all the cat's major organs. The mucus membranes may appear pale. Many cats show signs of dehydration.

The cat's liver and kidneys quickly get overwhelmed by trying to process all the damaged blood cells and jaundice appears. You may see labored breathing and a rapid or irregular heartbeat. As the cat approaches death the body temperature drops to below normal level and kitty may vocalize a lot. After much crying in agony, the cat will hemorrhage and die.

Early symptoms are not unique to bobcat fever, and may be mistakenly diagnosed for other diseases. Mycoplasma haemofelis is a bacterial infection that causes Feline Infectious Anemia (FIA), and produces similar symptoms. It can be transmitted via blood transfusions or from a mother cat to her kittens. Tularemia is also caused by bacteria, usually picked up in wild rodents, but can also be transmitted by ticks, biting flies, and mosquitoes. Both of these are typically treated with an antibiotic. If your cat is mistakenly treated for one of these diseases instead of bobcat fever, by the time the error is discovered the cat will probably already have died. This is how quickly the disease progresses!

Once symptoms of bobcat fever appear, many cats die within 3-6 days. Others linger for up to two weeks before succumbing to it. After death, the protozoa causing the disease also die with the cat, so it is not possible to catch the disease by handling an infected cat's body.

Autopsies performed on cats who died from bobcat fever have shown an enlarged spleen, liver, lymph nodes, and kidneys. There was extensive swelling in the lungs and hemorrhaging from the blood vessels in the lungs. Watery fluid had accumulated around the cat's heart. The mucous membranes surrounding the heart had also hemorrhaged. Evidence of the protozoa causing the disease were found in the poor kitties' spleen, lymph nodes, liver, and bone marrow.

In short, bobcat fever is a horrible way for a kitty to die.

If your cat contracts bobcat fever and survives, that cat should be kept indoors for the remainder of its life to avoid tick bites that could then spread the disease to other cats. If other cats in the home go outdoors and could bring in ticks, make sure to check them frequently for ticks and be alert to the early symptoms of bobcat fever so you can get your cat treated by your vet as soon as possible after infection.

How is Bobcat Fever Treated?

A few different drugs have been used for many years to treat bobcat fever. One is a drug called Imizol (imidocarb diproprionate) that is given by painful injection. The other, called diminazene, is also injected. A third drug called Atropine can help prevent any adverse reactions from the Imizol. But survival rates remain at around 25% with this traditional treatment.

Newer drugs are being used more successfully, however, improving survival rates to 60%. These include the antimalarial drug Mepron (atovaquone), given orally, which stops growth of the protozoa that cause the fever. The antibiotic azithromycin is given in combination with it to prevent any secondary bacterial infection that could complicate the cat's condition. An article just ran in DVM Newsmagazine about this new treatment combination discovered at the University of Missouri in April of 2012.

These drugs are usually combined with IV fluids and heparin to thin the cat's blood by reducing clotting. Treatment time was traditionally two to three weeks, if the cat survived that long. The newer combination is typically administered for about 10 days.

Still...a 60% survival rate means that there's a 40% chance your cat could die if bobcat fever is the diagnosis.

How Cat I Protect My Cat From Bobcat Fever?

Obviously, you'd rather keep your cat from ever getting bobcat fever than try to treat it. The best protection is keeping your cats indoors. This is especially true in the spring and summer months when ticks are most active. And if you've been out in the woods, remove those clothes before entering the house and check yourself for ticks before petting your cats. If your cats do go outside, try to keep them away from wooded areas where ticks tend to thrive.

Never use a tick treatment intended for dogs on cats, as it can be fatal. Fipronyl is one of the few tick treatments approved for use on cats, and even with treatment a cat is not 100% protected from tick bites. And dogs that go outdoors may also bring home an infected tick that can then bite your cats, so make sure everybody's got adequate flea and tick protection.

States where bobcat fever has been reported include Arkansas, Florida, Georgia, Illinois, Kansas, Kentucky, Louisiana, Mississippi, Missouri, North Carolina, Oklahoma, South Carolina, Tennessee, Texas, and Virginia. It has been found in the Florida panther, eastern bobcat, and Texas cougar in the wild and in a white tiger held in captivity. Bobcats as far north as Pennsylvania and North Dakota have been found to be carrying bobcat fever.

Products that can help protect your cat from ticks include:

Whichever method you choose, remember that none are 100% safe, and keeping your cats indoors is the best way to protect them from the horrible bobcat fever.

Email ThisBlogThis!Share to TwitterShare to FacebookShare to Pinterest
Labels: bobcat fever, can a tick make my cat sick, cytauxzoonosis, danger of ticks for cats, what is bobcat fever