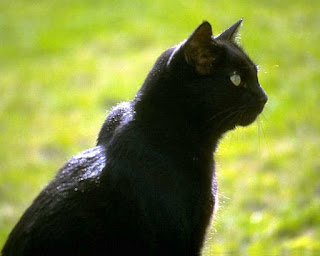 I've already commented on Facebook and Twitter today that my first cat was a black cat, and posted a photo of him drinking from a bird bath in my back yard. But he wasn't the only black cat to come into my life.

One chilly winter evening when I lived in my fabulous apartment on the river, I heard a cat meowing at top volume outside my front door. Opening it, I found a large black tomcat -- obviously a tomcat -- who was very talkative and friendly. I petted him a little and went in to get him a little of my cats' dry food, which he gobbled up hungrily.

"He's probably also thirsty," I reasoned, bringing him a dish of clean water. "And it's going to get awfully cold tonight; he needs a warm place to sleep."

Not knowing if he'd had his shots, I was hesitant to take him into my apartment with my two. So I found a cardboard box where the top had been cut around three sides instead of across the middle, making a sort of flap that hung all the way down. There was also a wool blanket I'd "inherited" from a friend moving overseas, and I put that inside the box to keep out the chill, placing the contraption next to my front door.

In the morning, I figured it might be a good idea to move the box from right by my door, to avoid arousing the ire of my next-door neighbor whose door was right next to mine. So I went to pick up the box and move it to the other side of the front balcony, where it would be next to some sliding glass doors on the front of my apartment, and not next to anyone else's front door.

But the box was unusually heavy, and sure enough, "Clarence" (as I'd taken to calling him) came running out of it! Pleased that he'd figured out the setup, I got him some more crunchies for breakfast and made sure he knew where I was moving his box so he could get in it later on when the temperature dropped again. That box stayed there for the rest of the winter, with Clarence using it for a warm refuge whenever he needed it.

Spring came and I didn't see Clarence around any more, so I figured he'd moved on, not wanting to imagine the alternative. But early the next fall, when it's still pretty hot here in Florida, I heard loud meowing outside my front door and opened it to find Clarence calling me outside! He was sporting a red collar someone had put on him and appeared to be happy and well fed...at least he didn't even touch the handful of crunchies I brought him to eat.

I petted and fussed over Clarence and told him how happy I was to see him. He hadn't come to eat, just to thank me for taking care of him when he'd needed it, and to let me know that he'd found a home with someone who had stepped into that caretaker role full time for him. When he left, I never did see him again.

If you've never loved a black cat, you've truly missed out! And yet black cats are the least likely to get adopted at shelters. It's something I've never understood; they've so sleek and beautiful, like a miniature panther living in your house!

Adopting a black cat today, on Black Cat Appreciation Day? If so, here are several popular names for black cats:
I once knew a lady who had a black cat named Albert, and the most interesting black cat name I've found was "Yeehaw" which is close to the pronunciation of the Gaelic word for night, Oíche, ("ee-ha"). But whatever you name your black cat, here's wishing you a long and happy life together!
Posted by Lynn Maria Thompson at 11:42 AM