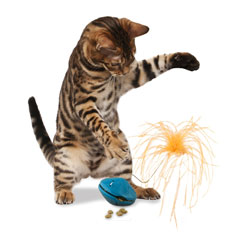 Is Your Cat Left-Pawed?

Today is International Left-Handers' Day, which got me to thinking: can cats also be left-pawed?

In fact, they can! In fact, it's estimated that around 40% of all cats show a preference for leading with their left paws. Only 20% are right-pawed, with the remaining 40% being ambidextrous. So of cats who prefer one side or the other, the lefties are in the feline majority!

Researchers at Queen's University Belfast studied 42 cats in 2010 and found that more females were right-pawed than males, and that their preference sometimes shifted between activities. For example, the cats might use one paw for fishing, but lead with another when grabbing a mouse on a string. The complexity of the task given seemed to have an effect, with the dominant paw revealing itself as the task became more difficult.

Hormones also played a role in the Irish study: cats who were spayed or neutered seemed to lose their preference, becoming more ambidextrous. Intact male cats tended to be left-pawed, while intact females were right-pawed. And female cats exposed to testosterone actually switched to a left paw preference! So perhaps the percentages estimated above are more of a reflection of how many male vs. female cats are altered.

Does it really matter which side your cat prefers? Most of the time, not really. But in an emergency situation, the dominant side will take over and can determine how your cat responds to the threat. While this could make a difference in the wild, it's likely no big deal around the house. If you have a behavior situation where one of your cats attacks another, it could actually come into play.

So how can you tell if your kitty has a preference for one paw over the other? Simple observation. Watch your cat play with a ball or toy to see which paw kitty uses to swat it first. Observe your cat in the litter box to see if kitty digs more with the left or right paw. Dangle a toy and see which paw leads in grabbing it. Place a treat inside a narrow plastic cup or an empty toilet paper roller tube and see which paw kitty uses to reach in and get it. Keep notes, if you like, so you can remember. (That's a necessity for me these days.)

Are there any adaptations you need to make to accommodate your left-pawed kitties, as needs to be done with humans? Well, since cats don't have opposable thumbs, there's no need for left-pawed things like scissors or pens. But if you're constructing a wall climbing system for your cats, it could be that they'll have a preference for climbing from one side or the other, so you may want to make both available. Some placement of hanging toys may need to be shifted a little to give the cats sufficient room to maneuver their dominant side. And if you're addressing that behavior situation mentioned above, you may want to look at where your escape routes are placed.

But if your cat is spayed or neutered, as all pet cats should be, kitty's likely ambidextrous, anyway, so you're probably good!

Old Maid Cat Lady has a wonderful assortment of toys for left- and right-pawed cats.
Posted by Lynn Maria Thompson at 9:01 AM