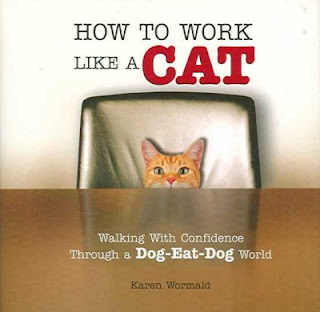 Labor Day is the holiday set aside to honor America's workers, so let's take a look at working cats! You may have thought that all cats just lie around napping all the time, but many actually have occupations.

One of the most famous working cats is Matilda, the cat-in-residence at New York's Algonquin Hotel. Matilda doesn't really do much these days other than hang around and greet guests (when she's not napping). Other famous hotel cats include Carmen and Fa-Raon in Nice, France, and Stonehurst Manor, New Hampshire's Bigelow Cats. Does lounging around all day and greeting guests count as work? In the feline world, I'd say so. But let's look for some more active examples of working cats...

There are certainly many celebrity cats from commercials such as Morris, that white Persian in the Fancy Feast commercials, or the adorable white kitten who helped a man propose to his girlfriend. And while cats in movies and TV shows are less common than dogs, many former shelter cats have found a home and a purpose after being rescued for such jobs. (You can find many of these in Old Maid Cat Lady's Video section.) They include Holly Golightly's feline companion "Cat" in Breakfast at Tiffany's,    Tonto of Harry and Tonto, Sassy the Himalayan cat in The Incredible Journey and Homeward Bound, and another famous Himalayan, Jinxie from Ben Stiller's Fockers movie trilogy.

Movie star cats aren't limited to ordinary house cats, either. There was Elsa in Born Free, Baby in Bringing Up Baby, Duma of the eponymous film set in South Africa, and countless wild cats filmed for nature documentaries. Who says having to catch your own dinner isn't work?

You've no doubt heard of Oscar, the nursing home cat who seemed able to predict when someone was about to die. By thus identifying patients in need of more acute palliative care, Oscar helped the nursing home staff to better provide for those patients and notify their loved ones. Increasingly, assisted living facilities and nursing homes are welcoming residents' cats, as they help patients to remain more alert and active, as well as providing comfort.

Therapy cats, who accompany their owners to nursing homes and rehabilitation facilities, have been particularly effective in working with patients afflicted with Alzheimer's and other forms of dementia, as well as with stroke patients and children with developmental disabilities. The cats seem to have a sense for what the patients need from them and provide it without being coached by their human companions.

For thousands of years, most ships have kept cats aboard, and the cats are believed to bring good luck to the vessels they inhabit. The U.S. Naval Institute even has a page devoted to Cats in the Sea Services. Why would ships want cats aboard? Rodent control, naturally. But the cats are also comforting to sailors at sea, providing a reminder of the pets they left back home. And who hasn't found distraction from the tedium of work in the entertaining antics of a playing cat?

In fact, rat-catching seems to be the occupation of most working cats. An organization in Washington state called Puget Sound Working Cats rescues cats and places them in facilities such as warehouses, garages, barns and sheds in need of natural pest control. Saving cats' lives by putting them to work...nice!

Many law enforcement agencies also have an affinity for felines. The police station in Hamilton, Massachusetts had a cat named Eco "on staff" for 11 years. In addition to mousing duties, he offered comfort to crime victims and stressed-out officers. Nobody even minded his napping during meetings! Other cats employed in law enforcement have included Fred of the Brooklyn District Attorney's office; the three-legged Jade of Lumberton, Texas; senior kitty Tizer of the British Transportation police at King's Cross Station in London; Mister Meanor of Lindenhurst, Illinois (who even has his own advice page on the village's website); and the sadly cat-napped Corporal Cuffs of the South Street station house in Philadelphia. Clever namers of cats, those police!

The bodega cats of New York City have been in the news, partially because they're technically illegal, but nobody seems to care about that. They help control rodents in the small grocery stores of the city, and customers enjoy seeing them snooze amongst the merchandise. (Probably doesn't hurt that the customers understand why the cats are there!)

Another famous ratter is Misty, a cat who keeps rats from chewing on wiring in sensitive equipment at a secret Department of Defense installation in the deserts of the American Southwest. Apparently cats are not technically allowed at the facility, but when an outbreak of a hantavirus had people paranoid about the rats that carry the fleas spreading it, the guards got less curious about feline intruders.

Many theaters also employ cats to keep down rodents. Given a rat's tendency to chew on rope, and given that there are many heavy things suspended by ropes above stages, this has likely saved the lives of countless actors and actresses.

Everyone's heard of the cat cafés in Japan; in a country where living spaces are often too small to accommodate pets, people get their cat fix by visiting these facilities with cats on staff to ignore or play with the guests. From the link above, it sounds like some of these cats "work" harder than others.

Many other types of stores have shop cats. They seem to be especially popular in bookstores, as literary types and cats seem to have a natural affinity for each other. Some may be mousers, while others are just there to keep the shop owners company and greet guests. Some become local celebrities.

Another local celebrity cat who's also found a following online is Joey the Garden Cat. He took up residence in a local TV news organization's garden and has become their official mascot. When Joey developed a tumor on one of his legs, thousands followed his recovery and sent him well wishes and gifts. And you'll occasionally see him wandering on-set during the news show!

Maru is a Japanese cat who's become famous just for being a cute cat, mainly from his caretaker's videos posted online. Billed as the "world's most famous cat," Maru has videos that get millions of views! You may have also seen Prin and Koutaro, the very patient Scottish Fold cats who live with Japanese cat clothing designer Takako Iwasa, operator of Cat Prin: The Tailor of a Cat. One wonders how many injuries Takako incurred while getting them accustomed to being her models. There's even a book of Iwasa's cat fashions now available!

Anyone who has a cat knows how they love to scratch things like furniture, draperies and carpet, so it was probably a natural career choice for Henry the Feline Fiber Artist of Bangor, Maine. The difference in Henry's work and that of most cats is that his fiber art pieces have actually been shown on exhibit! He's also been interviewed on blogs.

Some veterinarians' offices have donor cats who donate blood to cats undergoing surgery. Often, they were homeless cats who found a home there. Some may have been patients whose owners died and the family didn't want them, or whose owners moved away and were unable to take their cats. Most of the time, these cats just hang out around the office, greeting patients and getting spoiled by the staff.

There are also animal blood banks -- surprised? -- and cats donate feline blood there. These cats live at the facility for a year and are kept healthy and well fed, then are available for adoption. None of them are ever euthanized, although if they were not taken into the blood bank programs, they could easily have suffered that fate. But with only four such facilities in the entire United States, some vets do rely on resident donor cats at times.

Still think cats are lazy? Think again -- there are even websites devoted to working cats! One is called Shopcats and another is a page on Purr-n-Fur in the UK. You can submit stories and photos of working cats you know to be posted on the sites.

Bet you're taking another look at Fluffy and wondering how you can put her to work, huh? Happy Labor Day to all cats -- working and nonworking -- and to you, the staff who labor year-round to keep those kitties happy!
Posted by Lynn Maria Thompson at 9:00 AM