Is Your Cat Radioactive? 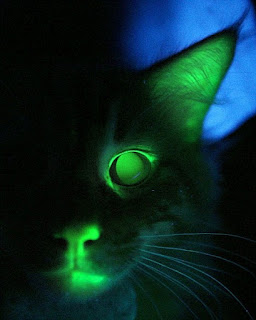 Your cat may not glow in the dark after
receiving treatment for hyperthyroidism,
but may still be emitting low levels
of radioactivity!

Protecting Your Family From Dangerous Radiation

By far, the most effective treatment for feline hyperthyroidism is radiation treatment with I131, a radioactive form of iodine. It has a 98% success rate in curing the condition. But the treatment has a side effect: cats emitting radioactive iodine through bodily fluids after release!

But let's back up a little. The thyroid gland secretes hormones that control the body's metabolism and growth. In older cats, it often starts working overtime. Hyperthyroidism is actually the most common hormone imbalance in cats, mainly affecting those who are 10 years old or more. My own little Vixen suffered from it for the last several years of her life. Symptoms of hyperthyroidism include:

Anyone who's lived with a geriatric cat will recognize at least some of these symptoms. Your veterinarian can tell you from lab testing of your cat's blood and urine if hyperthyroidism is causing them. If so, treatment options include lifelong medication (methimazole/thiamazole, which typically runs $600-$900 per year), surgical removal of the thyroid gland, or  I131 treatment. The latter consists of one shot of radioactive iodine, after which your cat will remain in the veterinary hospital for approximately three to five days, during which time you may not visit with him. Both state and federal guidelines regulate this time of hospitalization.

Cats treated with the I131 method often live twice as long as those treated with other methods. One treatment typically cures 85-95% of all cats, and if a second dose is given, it is almost 100% effective in shutting down the hyperthyroidism. The cat experiences no pain with it, and there are practically no side effects. It comes with a high price tag (typically around $1,000), but may be well worth it to you. When left untreated, the symptoms continue to worsen for the rest of the cat's life, resulting in wasting that is pitiful to observe. The earlier treatment is administered, the better the outcome.


The Danger to Your Family

Once your cat is released after I131 treatment, there are special precautions you must take to protect your family from radiation. You may be advised to keep kitty indoors and avoid contact beyond an hour a day for another two to three weeks. You may also be advised to dispose of the cat's litter in a special way for a couple of weeks, and to keep kitty away from small children and pregnant women. This is because the cat will continue emitting radioactive iodine in bodily fluids - urine, feces, saliva, perspiration, and tears. Since a cat grooms and gets saliva all over its body, and perspires through the foot pads, anywhere the cat walks, sits, or lies down during this time can be contaminated with radioactive iodine.

While the amount of radiation being emitted is low, there is still risk, and it's greater for children and pregnant women. Those exposed to it absorb the radiation into their thyroid gland, where it can destroy cells and affect metabolism and growth. Iodine particles can attach to dust particles and even become airborne in your home.

If you find staying away from your cat impossible during this time, you need some way to control the radiation being emitted by kitty's bodily fluids. Luckily, there is now such a product on the market! Laboratory Technologies has developed the Bind-It product that binds with the I131, enclosing it in the solution and enabling you to safely wipe it away. The kit comes with two weeks' worth of hand wash and a spray that both include Bind-It. The spray can be used to decontaminate litter boxes, floors, or almost any other surface where your cat goes.


What About Human Patients?

I131 is also used to treat humans afflicted with hyperthyroidism or thyroid cancer. Because of shortened hospital stays covered by insurance companies, many are sent home sooner in the U.S. than in other countries around the world. If you fear exposing your family (and your cats) to radiation during this time, there's a Bind-It kit for humans, as well! In addition to the liquid soap and spray, it comes with a concentrate that can be used to soak laundry, bed linens and bathroom surfaces like the toilet bowl, sink, and tub.

These days, it seems that dangers are lurking in just about everything we do! But by taking steps to minimize risk from known dangers, we can hopefully protect our families from harm. There's no need to fear the most effective treatment for feline hyperthyroidism if you take the proper precautions.