Do Your Cats Smoke? 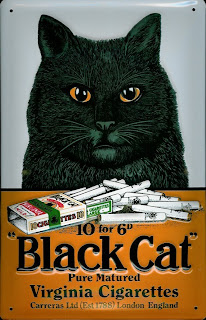 Do your cats smoke? If you or anyone in your household smokes around them, they do. Is it a good idea to expose your cats to tobacco smoke? Not according to research.

Dangers of Secondhand Smoke to Cats

While cats can survive some amazing things, long-term exposure to secondhand smoke can cause some serious health issues. Cats are actually more susceptible than dogs to diseases caused by exposure to smoke. Burning tobacco smoke contains over 4,000 chemicals, at least 40 of which are carcinogens. The more smokers in the house, the longer the cats live with them, or the more they smoke, the higher the risk of disease. Possibilities for your cat include:

Protecting Your Cats From Secondhand Smoke

Obviously, quitting smoking is the best way to protect your cats from the dangers of secondhand smoke. If you won't do it for yourself, quit for your cats. But not everyone is prepared to give up smoking. If you do smoke around your cats, there are certain precautions you can take. These could be as simple as smoking outside your house, or keeping the area of your house where your cats live smoke-free. You could also provide a smoke-free room to which your cats have access if they want to get away from the smoke.

But your cat will still be exposed to some toxins just from rubbing against you. Those same toxins that settle on kitty's fur also settle onto your clothes, skin and hair. And you know how nicotine will stain your fingers yellow, so your hands are full of smoking-related toxins. Washing your hands after smoking will help lower this risk, especially if you're feeding your cat right after smoking.

Brushing and grooming your cats daily will help remove some of the toxins from their coats so they won't ingest quite as much. This can help lower the risk of the oral squamous cell carcinoma.

Remember to keep all tobacco products, nicotine patches, nicotine gum, or e-cigarette cartridges out of your cats' reach. This includes those already used as well as the unused ones. Discard them in a sealed trash can that your cats can't tip over. Don't leave cigarette butts in an ash tray where your cats can get to them.

Air purifiers will help some, but many of the toxins released in cigarette smoke are in gas form. Air cleaners are designed to remove tiny particles from the air. So while even the best HEPA filter on the market would take care of any toxins in particulate form, it will not remove gasses. And smoke from a single cigarette may take a few hours to completely clear from the air in a room. We offer several types of good air purifiers carried by affiliated retailers in our Cat Allergy Relief section that would also work for helping remove smoke particulates from the air.

We also just recently added a line of products for smokers who want a healthier alternative, both for themselves and their cats. The Cigalectric products are electronic cigarettes that provide the same satisfaction as a burning cigarette, but are considered safer than tobacco products. You may have heard about electronic cigarettes or even seen them being used in non-smoking environments like restaurants or workplaces. They've been around for about five years now and are becoming quite popular as more areas are deemed non-smoking. While e-cigarettes do still contain nicotine, they eliminate the tar, carbon monoxide, and odor produced by cigarettes. The Cigalectric brand uses a new atomizer in every cartridge, which improves flavor and performance. Several options are available in our Personal Care section.

Some antioxidant supplements can help boost your cat's immune system if you smoke around the house. These combat the free radicals produced by the toxins in tobacco smoke. Vitamins C and E are powerful antioxidants. Always check with your veterinarian before starting your cat on any new supplements, and make sure to use supplements specifically for cats. You'll find these in our Feline Vitamins & Supplements section.

If you smoke, consider the effect on your cats. Is it really a risk to which you want to expose them? Take a few precautions and keep them healthy...if nothing else, it'll at least lower your vet bills!
Posted by Lynn Maria Thompson at 9:00 AM