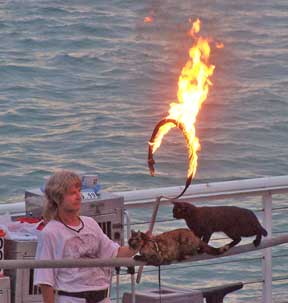 October has been Fire Prevention Month, and we've been remiss in not mentioning it before! But better late than never, right? Your kitty may not jump through a fiery hoop, but cats can be fascinated by fire. So here are some fire safety tips for cat guardians.

Many are the stories of cats who have awakened their owners to alert them to a fire in the home, saving their families from certain death. Here are a few:

There's a lesson in these stories: pay attention to things your cat is trying to tell you. Kitty's not always just looking for food...well, okay, most of the time, but not always! Cats have very sensitives senses of smell and hearing, and are often aware of danger before we are. So if your cat is acting more strangely than usual, there's likely a reason for it.

Cats are often the victims of home fires that happen when their owners are away. And owners trying to save their cats can also become victims of fires.

Cats typically die from smoke inhalation, but can also be severely burned in fires. Some survive. Others aren't so lucky.

Our feline companions have also sometimes been the cause of fires:

There are lessons in these stories, as well. Cats can be like innocent toddlers, in their curiosity and also in their occasional clumsiness. Would you leave a toddler unattended in a roomful of lit candles? Then it's probably not a good idea to leave your cat with them, either.


To help protect your home, and your cats, from fire, there are several steps you can take:

Fire safety is a year-round concern, but this time of year it's especially timely as we are using more candles, heaters, and electrical decorations around the house. Don't become one of those news stories that gets cited in fire safety articles like this one!
Posted by Lynn Maria Thompson at 9:00 AM