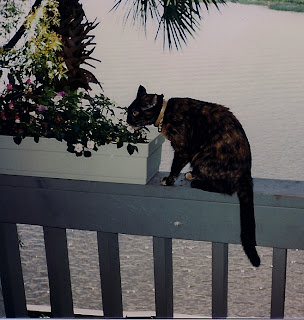 Have you ever helped a feral cat?

October 16 is National Feral Cat Day, dubbed so by Alley Cat Allies. Ferals have a special place in my heart, as my own beloved little Vixen was one for the first year of her life. The photo above was Vixen sitting on my balcony railing not long after I'd taken her in. She always retained a little of that wildness in her spirit, until the day she died.

Sadly, a lot of feral cats who find their way to animal shelters don't make it out alive. Even today, many are routinely euthanized immediately upon arrival as being "unadoptable." Anyone who has adopted a former feral cat, as I have, knows how untrue that myth is. So Alley Cat Allies was founded to encourage the practice of Trap-Neuter-Return, TNR for short, to address the problem of growing feral cat colonies. Once spayed or neutered, the cats stop having kittens, the fights and territorial spraying are calmed, and they can live out their natural lives with volunteer caretakers providing regular food, clean water, makeshift shelters from cold nights, and daily oversight.

Some ferals, like my little Vixen, can be somewhat tamed with a lot of patience. This is not always readily apparent when they are first trapped, as they're frightened beyond belief. And while many ferals can be tamed enough to be adopted, others will never warm up to close human contact. These cats can still serve a valuable purpose in a community, as a colony hunts rodents that would otherwise become problematic. Cats are the most natural form of pest control there is!

But this isn't good enough for some. There are groups who are opposed to the practice of TNR, and they're using faulty research skewed in their favor to try and get communities that have long operated successful TNR programs to begin rounding up all the cats in them and either putting them into adopters' homes or killing them. Some of their roundups of cats have mistakenly gathered up pet cats who were killed right along with the ferals.

In cases like with the Loews Resort at Universal Studios Orlando, Florida, these alarmists have been successful in dismantling very successful TNR programs that had been nationally recognized. A Washington, DC-area woman from an anti-cat group was actually convicted of animal cruelty for poisoning feral cats in a managed colony near her home!

These people say that TNR cats kill "millions" of songbirds, and that they're a threat to public health. Alarmist media outlets always looking for a story are eager to pick up on these "studies" when released, and will run any tale of a rabid cat who shows up somewhere, citing feral cats as a menace to public health. A closer look at the research, which any responsible journalist should take (but most don't), reveals its flaws. Peter Wolf's excellent Vox Felina blog regularly challenges these studies with facts. It's an unending battle.

Cats in managed TNR colonies are routinely vaccinated against rabies when brought in for spaying or neutering. Multi-year vaccines now available generally cover them for the remainder of their natural life, which for a feral cat is somewhat shorter than for our household companions.

Toxoplasmosis has also been cited by these groups as a serious danger to public health. But in reality, simple precautions like covering children's sand boxes when not in use, spreading citrus peels or hot pepper in gardens, and washing your hands after gardening (who doesn't wash their hands after gardening, anyway?!) will protect you from any possible exposure to toxoplasmosis in the waste material of neighborhood cats.

It's also a fact that, while some cats will kill birds, most are just common birds, not rare or endangered songbirds, and some are even from species that can become problematic for farmers. Most cats prefer rodents as prey, anyway. (They're easier to catch, since they can't fly away.) Less rat poison is necessary to control disease-spreading rodents if cats can naturally control their population...and less toxins in our environment is a good thing.

Slowly, one community at a time, people who care about cats are changing attitudes toward ferals. One subtle shift is a movement to stop calling them "feral" cats and start calling them "community" cats to emphasize that they are a part of our communities.

There are more books being written about feral cats all the time, to help people understand that they are intelligent, sentient creatures who deserve a chance...and that a little love goes a long way. A couple we sell here on Old Maid Cat Lady are the newly released novel Taming Me: Memoir of a Clever Island Cat and the nonfiction Maverick Cats: Encounters With Feral Cats.

If you'd like to educate your community leaders on starting or preserving a TNR policy in your city or county, we have several free brochures you can download and use for that purpose. Having all the facts about TNR is important, and the folks at Alley Cat Allies also have many wonderful resources you can use for this purpose. Our brochures include:


So Happy National Feral Cat Day! Let's all band together to go out there and make a difference for our community cats.
Posted by Lynn Maria Thompson at 10:18 AM