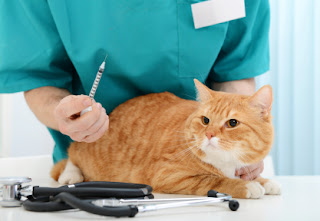 This installment in Old Maid Cat Lady's series on Cancer in Cats for Pet Cancer Awareness Month covers fibrosarcoma. If your cat develops a lump or lesion in an area of the skin, especially if that was the site of a vaccination in past years, it could be cancerous!

What is Feline Fibrosarcoma?

Typically, fibrosarcoma is a cancer affecting your cat's soft tissues, like the skin or connective tissue. It is relatively common. While slow to metastasize to adjacent tissues, it may be quite aggressive locally and can grow rapidly. Some tumors can be more deeply rooted in the underlying tissue.

Three main types of fibrosarcoma have been identified. The first is in older cats, who sometimes will develop an irregularly shaped growth on their body, legs, or ears. Their immune system may be weaker and their metabolic activities may be out of balance, as well. This makes them more susceptible to carcinogens in their environment.

The second is known as vaccine-induced sarcoma, or VAS. More on this below.

The third results from a mutant form of the feline leukemia virus (FeLV). It is the most aggressive of the three and often causes multiple tumors in younger cats.

One cause of this type of cancer in cats is a virus known as the above-mentioned mutation of the FeLV virus, the feline sarcoma virus (FeSV). This type of fibrosarcoma can occur spontaneously.

Another cause of the VAS type of fibrosarcoma is injections. More on this below.

Exposure to radiation can also cause fibrosarcoma, whether through X-rays or from radioactive particles in the air.

What's This About Cancer at an Injection Site?

Some cats have shown a tendency to develop a tumor at the site of a previous injection. Known as vaccine-associated sarcomas (VAS), they could develop anywhere from 2-3 months to 10-11 years after the injection is given. However, they are considered to be extremely rare (1 in 10,000 cats) and the risk of not administering a vaccine is far worse than that of a cat developing a sarcoma. 99% of cats who get vaccinated never develop a VAS.

VASs typically grow in the connective tissue between the skin and muscle. They were discovered in 1991 at the University of Pennsylvania School of Medicine. First associated with rabies vaccines, they were soon found in cats who had been vaccinated against feline leukemia virus, panleukopenia, and rhinotracheitis. Some studies are focusing on the inflammation caused by vaccinations, to which some cats are more susceptible regardless of the type of vaccine being given.

The role vaccinations play in causing these sarcomas is not really proven. There seems to be more of an incidence when killed-virus vaccines are used. This is hypothesized to be due to the addition of a "booster" known as an adjuvant that is added to killed-virus vaccines to help stimulate the immune system and make the vaccine more effective. Vaccines containing aluminum as an adjuvant have been shown to produce more inflammation (swelling) at the injection site after they have been given, and this factor has been shown to increase the risk of the cat developing a VAS.

Most VASs occur in the shoulder or the rear haunch area, which are common locations for these injections to be given. Fibrosarcomas likely resulting from vaccines have a tendency to be more aggressive and more malignant than those resulting from other causes.

Studies continue on the relationship between vaccines and fibrosarcomas in cats. Some cats have also developed five other types of tumors at vaccine injection sites. As many as six different types of tumors have been observed affecting the muscle, bone, cartilage, or fat at injection sites. Different methods of administering vaccines are being explored to completely eliminate this risk.

Our feline companions are considered to be more at risk for VASs than are other types of pets because cats have a higher sensitivity to chemicals that have their oxidation status changed (oxidative injuries). These substances include onions and acetaminophen, both of which are harmful to cats. Their susceptibility to this condition likely increases cats' risk of developing a VAS in vaccines containing aluminum.

What Symptoms May Indicate Fibrosarcoma?

You would likely first notice a lump or lesion that appears to be just underneath your cat's skin. It could be on the head, body, or legs...or even in the mouth. Oral sarcomas are the second most common type of oral cancers in cats.

The lesion may just appear as an area of swelling, and could be fleshy or firm. It may not be painful for your cat. The lump is often irregular in shape. Sometimes it looks ulcerated, in which case it has probably been there longer. If such a lump does not go away after about 3 months, if it is more than  3/4" across, or has increased in size, a biopsy is warranted.

Fibrosarcomas can also develop inside the cat's body, typically in the connective tissue in the ribs, pelvis, spine, or head areas. This tissue connects the body's bones to the muscles. In these locations, likely because it takes longer to discover, the cancer has a lower survival rate than those found near the skin.

If left untreated or undiscovered until the cancer has advanced, the cat may have difficulty chewing or eating, lose his appetite, get dehydrated, appear to be in pain when walking, become lethargic, or have unexplained bleeding from the mouth. Some may have a bad odor in the mouth, if this is the location of the tumor. By the time these symptoms develop, the cancer is likely quite advanced.

How Can I Be Sure It's Fibrosarcoma?

If you discover such a lesion on your cat, get thee (and thy cat) to the veterinarian!

Your veterinarian will do a thorough physical examination, blood testing, biochemical profile, urinalysis, a tumor biopsy, and X-ray of the tumor site to determine its size, and possibly a chest X-ray to see if the cancer has metastasized. The biopsy will tell the doctor whether this is a fibrosarcoma or an osteosarcoma, which has a different course of treatment.

What is the Treatment for Fibrosarcoma?

The first thing is to surgically remove the tumor. This will likely also include a margin of adjacent tissue, since these tumors are so locally aggressive. They have tiny, microscopic cells that extend like little fingers or tendrils into the tissue surrounding them, so it's very difficult to remove all of it. If it's on a limb, the tumor will likely cause the cat to lose that limb to surgery. Most recover and function just fine with three legs, and many cats have even lived a happy life and learned to adapt with only two! Obviously, younger cats are better surgical candidates, as older cats can have issues with anesthesia. Yes, this is some serious, major surgery. If possible, have it done by a surgeon who specializes in it, rather than at your local vet's office.

Some states are now experimenting with a vaccine against fibrosarcoma that can be given at the time of surgery to decrease chances of a recurrence. Because it is only experimental, the USDA prevents its being given to cats who have not already had a fibrosarcoma. As of 2012, this vaccine was only available in Arizona, Florida, Georgia, New York, North Carolina, and Tennessee.

Radiation therapy may also be performed both before and after surgery to minimize chances of recurrence and reduce the pain for your cat. It kills any residual cancer cells remaining after surgery, as it is difficult for a surgeon to remove all of them. The best outcomes are when radiation is given before surgery and when the tumor can be cleanly removed during surgery. When administered after surgery, radiation can cause the surgical wound to heal more slowly. The cat's hair near the incision may also grow back in a different color, usually gray or white.

Chemotherapy for fibrosarcoma in cats is actually also very effective, especially in cases where the cancer has metastasized (spread). The chemo is typically administered to the cat four or five times, every few weeks for about 90 minutes per treatment. Sometimes it can be injected at the time of surgery to kill any cells that were missed in the surrounding tissue. Chemo is very physically tiring for the cat and rough on the body, so most vets consider it the option of last resort. Your cat will probably also be prescribed something to relieve pain.

Treatment is generally very effective at fighting this type of cancer in cats, with most patients still in remission two to three years later. However, fibrosarcoma also often returns, so once a cat has been diagnosed with it, more frequent visits to the vet are recommended. Subsequent vaccination sites should be closely monitored to make sure another sarcoma does not develop there.

A diagnosis of fibrosarcoma is not an automatic death sentence for your cat; many cats live long and happy lives after the cancer is removed. But as with all cancers, it must be caught early and treated, or it could become life threatening. The chance of a fibrosarcoma spreading to the major organs is only 3%-5% if caught early. But if it goes untreated, that risk rises to 24%. Younger cats also stand a better chance of recovery than older ones.

Is There Any Way To Prevent Fibrosarcoma?

When it comes to the VAS type of fibrosarcoma, yes! Cats only really need one annual vaccination, and that's for rabies. The others are not necessary. Less injections mean less injection sites, so less risk for the inflammation that can lead to a VAS. Have your veterinarian run a blood titer to determine your cat's immunity level before automatically getting vaccinations for everything every year. Then you can only have your vet give vaccines for those where kitty's immunity has fallen low.

Next, when getting your cat's vaccinations, request a recombinant rabies vaccine rather than an inactivated one. And make sure that any vaccines your vet is using are non-adjuvanted. These typically must be given more frequently, but are less likely to cause the inflammation around the injection site that is associated with VASs.

Make sure that the needle your vet is using on your cat is no larger than 25 gauge. Dogs may be able to handle larger needles, but the smaller ones will cause less irritation for a cat, as they will carry less debris and hair with them under the skin. You may also request a vaccine that is administered intra-nasally. There are newer vaccines on the market now that require no injection at all. These present the least risk for VASs and would be especially important to use on cats that have previously been treated for a VAS. If your cat needs another type of medication that can be given orally rather than by injection, opt for that. No, it's not fun to give a cat a pill, but it's far better than putting your cat through expensive and dangerous surgery, radiation, and chemo!

Massaging the area where the vaccine was given may also help by spreading out the material injected into the body. This must be done just after the shot is given. And make sure your vet keeps detailed records on the brands of vaccines used and the sites at which they were injected into your cat. This can be very helpful if you detect a lump that requires further investigation.