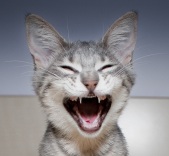 My series on Cancer in Cats for Pet Cancer Awareness Month continues with a discussion of this painful type of oral cancer. As with all cancers, early identification and treatment will ensure the best prognosis for your kitty.

What is Oral Squamous Cell Carcinoma?

Cats groom themselves all the time, so it's natural that they may ingest carcinogens in doing so. In fact, this is a common type of cancer that accounts for about 10% of feline cancer diagnoses. Oral squamous cell carcinoma (SCC) is the third most common tumor diagnosed in cats. These tumors tend to be fast-growing and invasive, often spreading to adjacent lymph nodes. While there are other causes for oral tumors in cats, squamous cell carcinoma accounts for over 60% of them.

This type of cancer may appear anywhere within a cat's mouth. Most tumors occur underneath the tongue or on the gums, but they can also appear on the roof of the mouth or in the cheeks. They grow rapidly, so acting fast can save your cat's life.


When Should I Suspect My Cat Has Oral SCC?

Quite often, you'll be able to see these tumors. If you brush your cat's teeth, make sure to examine the mouth thoroughly to scan for one. It may show up as a small reddened ulcer that lingers long after it should have been healed. There could also be a small hardened, swollen area along the lower jaw or cheekbone. There may even be more than one. Places to look include the gums and underneath the tongue.

Some cats can develop an enlarged jaw due to the tumor. Kitty's face or jaw may look malformed or a bit asymmetrical. With tumors on the gums, they often metastasize to invade the underlying jaw bone. If your cat has a couple of teeth in the same area that need to be removed, the cause could be an underlying tumor and a biopsy may be indicated. If kitty loses a tooth and the resulting hole in the gum does not heal easily, there may be a tumor.

In the later years of her life, my own little Vixen developed a lesion on her chin that would sometimes swell and bleed. A biopsy revealed it to be benign, but it was a source of worry for me just the same.

Your cat will likely not have much of an appetite, always a sign that something is wrong. You'll notice weight loss, naturally, but the cat may also want to constantly be chewing. Kitty may have difficulty eating. Bad breath and drooling may occur. There may be swelling in the mouth or jaw, and the area may be painful for you to touch. The lymph nodes in the neck may be swollen. If there is a lesion on the gum, teeth near it may be loose. You may also see some bleeding from the mouth.

Cats have been diagnosed with oral cancer anywhere from ages 3 to 21, so age is not much of a factor. The average age of diagnosis tends to be 12.5 years, so older cats are more at risk. There is no predisposition to it in any particular breed of cat; all are equally susceptible. Several factors may contribute to it, although there is no major cause that has yet been identified.

Living in a house with smokers is one of the most important risk factors for this type of cancer. Even living for a little while with a smoker doubles a cat's likelihood of developing oral SCC. Cats who continually live in a smoke-filled environment are four times as likely to develop it.

Some studies have shown a link between wearing flea collars and developing this type of cancer. This was assumed to be due to the closeness of the collar's pesticides to the cat's mouth area. However, there are so many different types of flea collars that no distinction as to the type that contributed to the cancer could be made.

While exposure to the sun among outdoor cats or white-coated cats can cause tumors on the ears or nose, sun is not typically a contributing factor to oral cancer (unless the cat sleeps in the sun with his mouth hanging open).

Owners who regularly used a flea shampoo on their cats actually reduced the cats' risk of oral squamous carcinoma by 90%. This could be partially due to the shampoo also washing away many of the toxins from the cat's fur that would have been ingested through grooming.

Eating a large amount of canned cat food has also been shown to contribute to a cat's risk factor in developing oral cancer, with canned tuna being the riskiest. This one's troubling to me, as my Golden Boys both love their daily treat of some canned food in a fish flavor! The relationship between canned food and oral cancer may be related to the cats' oral hygiene, as eating dry food keeps the teeth cleaner. No study has been done on cats whose teeth are regularly brushed.


What is the Treatment for Oral SCC?

Not all oral tumors are cancerous; there are several types of feline oral tumors that can be benign. One small study showed that about half of the cats showing symptoms actually had cancer. And there are different types of feline oral cancer, although they are much less common. If the cancer is SCC, it will tend to be extremely fast-growing, invasive and malignant. Only those tumors caught very early are deemed treatable. Once it has spread, the cat's chance of survival is minimal.

Your veterinarian will do a blood count, a serum chemistry profile, urinalysis, and tests for feline leukemia (FeLV) and feline immunodeficiency (FIV) viruses. X-rays, a CT scan, or an ultrasound may also be taken to locate the extent of the tumor's invasion, which can change the course of treatment. The primary tumor will likely be biopsied to determine if it is actually cancerous. This will have to be taken from the cat's mouth, not through the skin. You may be referred to a veterinary oncologist for treatment.

The stage of the cat's tumor will be assessed after biopsy as T1, T2, or T3. The testing will contain additional notes on whether the adjacent bone is invaded, if the cancer has spread to the lymph nodes, and if it has metastasized to other tissues. This gives the vet useful information on whether or not the tumor is treatable. Sometimes it's difficult to determine the type of cancer without additional testing, so a course of treatment is not readily apparent.

If a diagnosis of SCC is confirmed, sadly there is no therapy with great success in treating it. Surgery to remove as much of the tumor as possible, followed by radiation therapy is the most common treatment. That surgery may be quite radical and involve removing a significant portion of the cat's jaw. Cryosurgery (freezing) is now being used on very small tumors. Sometimes a combination of radiation and chemotherapy are used.

Most cats survive only a few months after diagnosis. A rare few have been disease-free a year after surgery. But most owners reported that they were pleased with their cats' quality of life after the surgery and would have made the same decision to do it again had they known the outcome.

The success of surgery depends largely on where in the mouth the tumor occurred. The best location for one to be is on the front part of the lower jaw. Tumors located closer to the rear of the mouth, or those that cross the midsection of the oral cavity typically cannot be completely removed by surgery. In fact, surgery's only role in these cases is to make the cat comfortable for the remainder of its life, which won't be long. The prognosis for tumors like this is so poor that such surgery is referred to as palliative care.

Cats who survive the surgery often have trouble eating due to mouth tissue having been removed, and many of them drool. These complications require their owners to bathe their chests and front paws several times a day. Tumors involving the jaw area are also tricky, and may involve removal of a portion of the cat's jaw. Tumors on the upper jaw are typically inoperable.

Radiation may be used to treat inoperable oral tumors. It is also useful to prevent disfiguring the cat, and is used in combination with surgery for the best outcomes. This type of treatment can also be extended to include adjacent lymph nodes, helping prevent the cancer from spreading. However, the larger the tumor, the less the likelihood of its being eliminated by radiation alone. Radiation is also sometimes used as palliative therapy in cats with advanced SCC, although it rarely prolongs the cat's life for long and can have some unpleasant side effects. A new type of radiation therapy known as stereotactic may hold promise for faster results.

Chemotherapy by itself has not proven effective in fighting oral SCC. When combined with radiation, however, its effectiveness improves slightly. But many of the cats treated with chemo in studies did not live longer than a few additional months. Studies continue on new types of chemotherapy drugs, including histone deacetylase inhibitors (HDACIs) and anti-inflammatories such as LOX and COX inhibitors.

Newer experimental drugs that mirror some being used in human cancer therapy are being tried on cats. Some are showing hope, but it is too early to say for sure.

As this type of cancer is usually extremely painful for the cat, most cats undergoing treatment also require some type of pain therapy. Supplemental nutrition will help their bodies to fight the cancer and may help them feel a little better, even if their prognosis is not good. Some may require a feeding tube, as well. In addition to difficulty eating and drooling, the cats will have trouble grooming and swallowing.

Sadly, 90% of cats diagnosed with oral SCC die within a year of diagnosis. The most that can be done with treatment is to make the cat more comfortable for the remainder of its life (palliative care). Tumors are likely to recur in more than 1/3 of cases, and will eventually make it impossible for the cat to eat or even breathe, at which time euthanasia is the kindest option. The lucky 10% of cats who survive for a year are likely to survive for at least two years. Some may live cancer-free for three years, but most eventually suffer a recurrence of the cancer.

More cancer research funds tend to go to research on dogs rather than cats, as dogs are where the money is; the sentiment among veterinary researchers is that owners tend not to treat diseases in cats as aggressively as they do in dogs and are quicker to choose euthanasia for a cat. Slowly, this is changing...the operative word there being "slowly." Cats' delicate systems are also more sensitive to drugs than dogs, which further complicates both testing and treatment options. Studies funded by the Winn Feline Foundation and The Morris Animal Foundation may yield more hopeful results.

Treatment is pricey; the testing alone could run you up to $1,000 at a veterinary oncologist. Surgery could be another $2,000, with radiation running up to $6,000. Chemo runs $2,000-$3,000. This is one of those times when having a pet insurance policy that covers cancer treatments would have been a very good investment.

As with any type of cancer, your veterinarian can best advise you on your cat's unique situation. The main pointers with oral cancer are to remain vigilant, do frequent inspections of your cat's mouth, don't smoke around your cats, and practice good oral hygiene with both regular home care and annual veterinary checkups/scalings.