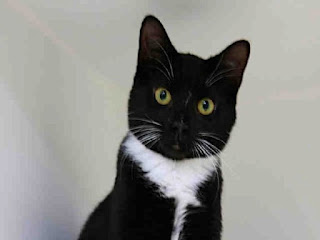 This month's blog posts have been awfully depressing, haven't they? Perhaps that's just for me, since I've had to research and write them all! But if you've been following them, you may also be worried about every little abnormality you notice in your cat.

That's not entirely without intent, and hopefully it hasn't deterred you from continuing to read the Old Maid Cat Lady blog. During May, which has been Pet Cancer Awareness Month, I wanted to make everyone aware of the many types of cancer that may strike their feline companions. In every instance, catching these cancers earlier rather than later means that your cat will have a better chance of surviving. Checking your cat at home helps you better bond with kitty, and enables you to ask your veterinarian about anything suspicious, as well as catching the early symptoms of any cancers that may be lurking.

Cancer is one of the leading causes of death in cats. Lymphoma and skin tumors are the most common. The good news is that cancer is almost always treatable if caught early enough. Pathologists examine a tumor to "stage" it, determining how far it has progressed. For all tumors, the standard staging system is:

If you've missed any of this month's posts, there were eight types of cancer examined in great detail. They were:
Today's summary lists several other types of cancers that may attack your cat, but will not go into as much detail as the others.

These tumors are most often found in the mouth, but can also affect other parts of the body. In cats, they have been found on the tongue, tonsils, vulval area, brain, and toes. They are rare and may originate from nerve cells. Removing them surgically typically takes care of the problem.

Also known as sarcoid tumors, these are found more often in cats living in rural areas, possibly because of their relationship to the bovine (cow) papillomavirus. They are commonly found on the nose, lips, and ears, but can occur in other places.

These tumors' tendency to send little tendrils into adjoining tissue means that it's difficult to remove all of the tumor surgically. Better results are often obtained with cryosurgery (freezing), radiation, or amputation if the tumor is located on a cat's leg, tail, or ears.

This is a type of cancer that affects a cat's bones. It is more common in older cats, and more commonly seen on rear legs than on front legs. It is also often found in the mouth. Its cause is unknown, but it has been found on the site of a previous break in a leg. 16% of cases tend to be malignant. Surgery to amputate the affected area typically allows the cat to live a normal lifespan.

This is another type of oral cancer that affects cats. At one time it was known in the medical field as acanthomatous epulis. It may occur in the jaw or on the gums, and is most often benign.

This type of tumor is only found in cats, and originates in the connective tissue. Its uniqueness within felines is likely why so few studies have been done on this type of cancer. It commonly occurs on the front part of the upper jaw.

These are the most common types of skin tumors in cats. They may be benign or malignant.

A basal cell tumor may appear as a pigmented, ulcerated nodule, like a sore. Typically, the tumor has no hair on it.  One can appear almost anywhere on your cat's body, but it is most commonly in the head, neck, or shoulder area.

While most basal cell carcinomas are benign, they do require surgical removal, and the earlier the better. This typically takes care of the problem and no radiation or chemotherapy is necessary. Most cats recover completely.

This is the medical term for liver cancer. Older cats are more prone to it, and male cats more so than female. It will cause the cat's abdomen to bloat. Your cat may breathe quickly or have difficulty breathing. You may notice a yellow, jaundiced look to his skin or the whites of his eyes, and pale gums from anemia. As with most cats who feel sick, he'll have a poor appetite, perhaps vomit (don't all cats?), and lose weight.

Quick action is necessary to save your cat's life. Other diseases can mimic the symptoms of liver cancer, and many other types of cancer can spread to the liver.  Some types of these tumors can be removed surgically. If not, the cat may be provided with palliative care until the cancer claims him.

This is a cat's equivalent of breast cancer. It is the third most common type of tumor in cats, but is almost unheard of in spayed females. Older cats that have been bred are most susceptible to it, with the Siamese breed at twice the risk of other breeds. Many of these tumors will occur on the cat's front (anterior) mammary glands rather than the rear (posterior) ones. Most require surgical extraction, with early identification and treatment greatly improving the cat's chances of survival. There was a prior post on the Old Maid Cat Lady blog about feline mammary cancer, one year during Breast Cancer Awareness Month. Click on the link in the previous sentence to read it.

Yes, these are a lot of types of cancer, and yes, there are many more. Now you can probably understand why some veterinarians (veterinary oncologists) specialize in diagnosing and treating cancer! And if these posts can save one life, or spare one cat from enduring advanced forms of cancer by allowing that cat's owner to identify his (or her) cancer earlier, it will have been worth all the depressing work to research, write, and publish this series.

I promise that future posts will get back to fun subjects and telling you all about the wonderful products on OldMaidCatLady.com! And hopefully this series has done some good for Pet Cancer Awareness Month. Thanks for sticking with me through it!