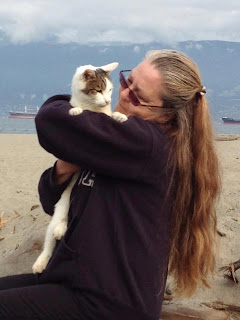 May is Pet Cancer Awareness Month, and I just learned today of the passing of another cat famous in the Internet. Kenny Pawgers, beloved companion of Maria Soroski of Crazy About Cats, has succumbed to the lymphoma he had lived with for the past couple of years. That's the two of them in the photo above.

As with humans, there are many types of cancer that can attack cats. I've covered some previously, and will address others separately during this month. In Kenny's honor, this one is on Lymphoma.

What is Feline Lymphoma?

Lymphoma is a  malignant type of cancer that originates in a cat's white blood cells, also known as lymphocytes, which make up the body's immune system. It is responsible for approximately 90% of blood cancers and 33% of all tumors in cats. It can also cause a condition known as hypercalcemia.

The lymphatic system is quite complex and extraordinary. In a healthy cat, it has three main functions. First, it helps maintain a balance of fluids between the blood vessels and bodily tissues. Its lymphatic capillaries are interwoven with blood capillaries, tying it closely to the cardiovascular system. Secondly, it plays a major role in immunity through the body's white blood cells. And third, it absorbs fats reaching the small intestine during digestion.

There are two types of lymphocytes in the body, known as B-cells and T-cells. Both originate in the bone marrow. T-cells are the ones that identify foreign matter (antigens) in the body, such as bacteria, viruses, toxins, foreign proteins, or particulates (such as allergens), and mark them for destruction. They mature and are "educated" in the thymus gland to recognize the difference between cells that belong in the body and those that don't. But "Thymus U" is a tough school: if they fail their "final exam" on this, the thymus gland destroys them! Once mature, the T-cells move into the secondary organs of the lymphatic system, where they remain. They regulate the immune system from being over- or under-active.

B-cells are the white blood cells that produce the antibodies against antigens, proteins known as macrophages, that attach themselves to these invaders. The B-cells remain in the bone marrow as they mature. Once exposed to a certain type of antigen, the body remembers it so that the B-cells know how to fight it and can produce antibodies more rapidly the next time they encounter it. This is how your body develops immunity to certain diseases upon second exposure to them.

The fluid flowing through the lymphatic system of capillaries is known as lymph. It is made up of fluid and proteins forced out of blood capillaries into the space between the body's cells. This fluid sustains life in the cat by delivering oxygen and nutrients to cells and collecting waste from them. The flow of lymph is regulated by the body's muscle movement. Lymph is carried to the spleen, where it is processed before being conveyed back into the blood. This is how the body balances fluids. The spleen breaks down old red blood cells, stores blood, and filters the blood for antigens. Within a 24-hour period, about half of all lymphocytes in the blood pass through the spleen.

Lymph nodes are located throughout the body. Larger concentrations of them exist in the neck area, near the back of the front legs ("armpits"), and groin. It is here that lymph is filtered before being returned to the blood veins. In the connective lymphoid tissue around the lymph nodes, the B-cells, T-cells, and macrophages are also stored. Two very specialized areas of lymphoid tissue are the tonsils in the throat and Peyer's patches in the small intestine's lining.

Lymphoma can affect both types of lymphocytes, causing them to go into uncontrolled growth and multiplication. They can then collect in a lymph node to form a tumor, which then grows and invades the surrounding tissues and organs, depriving them of nutrients and oxygen. Sometimes these abnormal lymphocytes will travel to other lymph nodes or organs. This is known as metastasizing.

It is believed that lymphoma develops after a cat is exposed to the feline leukemia (FeLV) or feline immunodeficiency (FIV) viruses. This is because the rate of lymphoma among cats exposed to either of those viruses is much higher than for cats who are not. While cats of any age can fall victim to lymphoma, most tend to be 10-12 years old when diagnosed.

Due to the presence of lymphocytes in all parts of the body, this type of cancer can also affect a cat in different locations. For example, cats who are around a lot of smoke from tobacco are at a higher risk for lymphoma that affects the gastrointestinal tract. This may be due to their grooming the particulates of smoke that become trapped in their fur.

What Are the Symptoms of Lymphoma?

Depending on where a cat's lymphoma originates, it can cause varying symptoms. The one symptom common to them all is a loss of appetite.

If the lungs are its target, the cat will breathe with his mouth open, cough, and lose weight rapidly.

If the lymphoma occurs in the cat's gastrointestinal tract (abdomen or liver), kitty will also experience vomiting, diarrhea, bloody or tarry stools, and be lethargic. This is the most common type of lymphoma seen today.

If the lymph nodes are its target, the cat will have swollen lymph nodes in the location of attack, which could be the jaw, under the arms, or in the groin area. Weight loss and depression are additional symptoms.

If the lymphoma occurs in the kidneys, the cat will be vomiting, show increased urination and thirst, and become very weak.

If your cat exhibits any of these symptoms, keep careful notes on which ones so you can give this information to your veterinarian. This will help the vet know where to look for other signs of the cancer. Testing done to confirm a diagnosis of lymphoma will include a physical exam, blood cell count, a blood chemistry panel, urinalysis, X-rays, sampling of lymph node tissue for examination under a microscope, and an ultrasound to check for an enlarged liver or spleen.

Can Lymphoma Be Treated?

While not normally curable, a cat's life can be prolonged a little by treatment. This may include surgery to remove any mass present in the abdomen, chemotherapy, and in some cases radiation therapy. The cat will likely remain on chemotherapy for the remainder of its life, which may be six months to a year or more after diagnosis, with some brief periods in between treatments.

Even better, there are some steps that can be taken to minimize a cat's risk for lymphoma. Indoor cats are less at risk than outdoor cats, so keeping your cat indoors is one step to take. Another is not to smoke around your cats. If you are addicted to smoking, try one of the newer electronic cigarette kits that will allow you to receive the nicotine you crave and enjoy the physical motions of smoking without endangering your cats. The third thing you can do is to get your cat vaccinated against FeLV and FIV and try to keep them from being exposed to other cats who have these diseases.

There are some natural and homeopathic remedies designed to address cancer in cats, but little testing has been conducted to determine their actual effectiveness. This is not to say that they won't work for some cats; every individual's physiology is unique.

Our sympathies to Maria on the loss of Kenny Pawgers. May he fly high, finally free of the suffering he has endured, and remaining close to the person who loved him so. And may she find peace in her time of grief, soon turning her attention to other cats who still need the love she has to give.