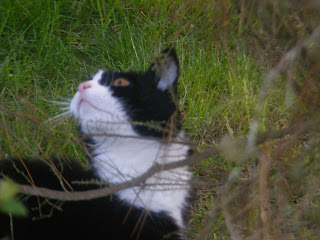 Today, over in the UK, Pingu the tuxedo cat crossed over the rainbow bridge. The photo of him shown above was taken the night before as he frolicked in the garden with his human parents. It is from his Facebook page, to which a link is provided near the end of this post. Pingu's "mum," Gayla, always called him a "Shunty Warrior," as he suffered from liver shunt. In Pingu's honor, let's take a look at this condition in cats.

What is Liver Shunt?

Also known as portosystemic shunt or PSS, a liver shunt is a rare condition in which a cat's main blood vessel that conveys blood from the digestive system to the liver (the portal vein) does not develop properly. A healthy liver filters toxins from foods, processes elements in foods into chemicals needed by the body, produces bile acids to help the body break down fats, and plays a major role in storing sugar and producing protein for the body.

During pregnancy, a mother cat's liver does all of this for the kittens' fetuses, and there is no need for the portal vein to function. The shunt that carries each fetus's blood to the mother's liver (the left umbilical vein) typically closes within three days after birth and the kitten's own liver takes over. In some cats, this shutdown does not occur and the vessel still bypasses the kitten's liver. This prevents the liver from filtering the toxins it usually removes from the blood as a part of its normal metabolic functions. Nutrients from food that typically enter the bloodstream are blocked, so a cat with liver shunt cannot process the essential elements that fuel the body's proper development and metabolism.

Because their bodies are not receiving proper nutrition, cats with liver shunt typically are smaller than normal (a condition often called "failure to thrive"). Pingu was the runt of the litter and almost died at birth, but was resuscitated.

With all the toxins a liver shunt allows to circulate in the cat's bloodstream, cats may experience drooling, a lack of appetite, vomiting and diarrhea or constipation. This further hampers their body's ability to grow and function normally. These symptoms are usually more noticeable just after the cat has eaten.

As the central nervous system is affected, liver shunt cats may also experience depression, tremors, seizures, an occasional swaying as if drunk due to their inability to control voluntary muscles (ataxia), bouts of blindness, and mental abnormalities that can cause either sudden aggression or disorientation and sluggishness. A cat with liver shunt may press its head up against things and hold it there, much longer than a cat just giving you a "head butt" to show affection.

The additional ammonia in the urine of cats with a liver shunt may cause them to have urinary tract problems such as bladder stones, blood in their urine, and difficulty urinating as they age. When young, they may drink and urinate too much. Their kidneys often become enlarged. In fact, stones and urinary tract infections (UTIs) may be the first symptoms a cat exhibits that will lead to a liver shunt diagnosis. These may not appear until later in life, with many showing no symptoms at all when younger.

The irises of their eyes may be copper in color, even in breeds that do not typically have this color eyes. While some cats do have copper colored eyes naturally, this type of copper coloring looks a little different, more intense and without the variegations normally seen in the irises of eyes. The cause of this unusual eye coloring is unknown.

Liver shunt cats may also suffer from a heart murmur or an improperly formed heart. They may be anemic and have low blood sugar. Their liver is typically smaller than normal because it is not receiving a normal blood flow and begins to atrophy. Often, liver shunt cats will develop other conditions. In Pingu's case it was Cushing's disease. This further complicates their treatment.

In most cats with this condition, it is congenital (they were born with it), but it can be acquired later in life. About a quarter of the cats with a liver shunt acquired it later in life. There is a higher incidence of the congenital condition in purebred cats. Himalayan and Persian cats seem more at risk for it.

When acquired, a liver shunt is likely due to another liver problem from poisoning, hepatitis, cirrhosis, or inflammation that caused the body to reroute blood through alternative vessels when the main one was compromised. While the smaller veins can still route blood to the liver, they cannot process as much as does the main vessel, so the normal contributions the liver makes to the body's overall wellness will be compromised.

How Would I Know For Sure if My Cat Has a Liver Shunt?

Multiple symptoms from the list above will be your first sign. However, full diagnostic testing by your veterinarian is the only way to confirm a suspected liver shunt. This will include blood testing, X-rays, and ultrasound. Your cat's blood will be tested for levels of red blood cells, liver enzymes, blood sugar, cholesterol, protein and blood urea nitrogen (BUN). Liver function tests will be done to check for elevated values. X-rays will show a smaller-than-average liver and perhaps enlarged kidneys. Ultrasound may show the liver shunt, and can also reveal bladder stones caused by the condition.

If these tests are uncertain, a rectal technetium scan can be done to show whether blood traveling from the colon is going first to the liver as it should before being routed to the heart. Sometimes a CT scan can show this, but cost usually prohibits its use. The vessels can be very difficult to see on regular X-rays. A final confirmation can be provided by surgery, at which time an attempt can be made to repair the shunt. But since liver shunt cats are not great surgical candidates, some medical stabilization may need to be done first.

Obviously, all this testing can run into the thousands of dollars. If you haven't bought health insurance for your cats (or if that policy doesn't cover conditions like liver shunt) be prepared for some costly vet bills.

Can Liver Shunt be Treated?

Most definitely! Pingu lived a happy life for more than 12 years as a Shunty Warrior, the first five of those with no treatment at all. His brother, Sharky, also has a liver shunt. Pingu even survived being hit by a car at age three. Both Pingu and Sharky had endured mistreatment by local children before being rescued by their forever humans.

There was a time when liver shunt cats were automatically euthanized, but modern veterinary medicine has provided ways for them to survive. Some veterinarians may still recommend euthanasia for them, so if your vet doesn't know how to treat liver shunt, you may be able to find another who does. Some cats are also better candidates for treatment than others; if your cat's liver shunt is not discovered until it's already done severe damage to his body, euthanasia may be your best option. Liver shunt cats do require special care, so if you have a cat with this condition, be prepared for the additional time, attention, and expense that will be required.

The main blood vessel that bypasses the liver can be surgically ligated (blocked) to redirect blood flow through the smaller vessels that lead to the liver. This is typically more successful in dogs than in cats, but the surgery does work for about a third of cats who have it. Surgeons generally biopsy the liver at the time of surgery to determine how much damage has been done to it. This will help determine the long-term course of treatment and the cat's prognosis.

Cats with liver shunt must typically stay on a prescription diet that is restricted in protein and magnesium, and take daily supplements of zinc, vitamin E, and lactulose to help the body metabolize nutrients and support normal liver functions. They must be closely monitored by a vet to periodically repeat the tests that diagnosed the condition initially. Sometimes, if the liver appears to be regenerating well after surgery to partially reroute blood to it, a second surgery may be performed to close off any remaining shunting vessels.

Because they get easily dehydrated, liver shunt cats need to be encouraged to drink water and often need subcutaneous fluids. They cannot take or eat anything that has a diuretic effect (causes additional urination) or that suppresses the central nervous system. This makes them poor candidates for surgery because they have trouble recovering from the anesthesia. Infections can also be problematic, so a cat with a liver shunt should be kept indoors and monitored closely.

Liver shunt cats should not reproduce, first to prevent passing on the condition, and also due to the additional strain pregnancy puts on the body. Similarly, if a litter produces kittens with liver shunt for a breeder of purebred cats, those parents should not be bred again, as this condition is strongly suspected to be inherited.

We send condolences to Pingu's family, both human and feline, and wish them all peace as they grieve for their fallen shunty warrior. Many thanks to them for having the courage to allow Pingu and Sharky to live, for diligently managing their care, and for sharing Pingu's story with other cat lovers around the world to make us all aware of the liver shunt condition. To Pingu's spirit, a safe journey into the joy of living without a body that has caused you so much suffering. You were much loved in this life!
Posted by Lynn Maria Thompson at 11:28 AM