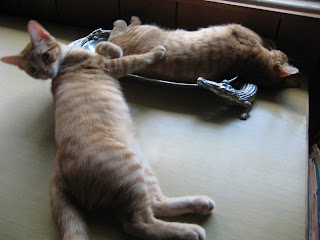 All month, I'll be encouraging people to adopt cats from shelters. And today's an especially special day for me to kick off this series, as it's the first "Gotcha Day" for my two red mackerel tabbies, Captain Roughy and Gilligan, pictured above! Yes, one year ago today, I officially adopted the little cuties I quickly dubbed "The Golden Boys."

All month long I'll be sharing stories of cats I've taken in. Today, you hear about my Golden Boys.

Last year, as you may recall, I lost my beloved little Vixen when she was 24 years old. I was devastated. The last few years with her had been rough, as her body and mind began to fail her. But she'd been with me through several moves, the death of two boy kitties, the rescue and homing of several other cats, countless broken hearts from failed romances, and the deaths of both of my parents. I lived with her longer than any stretch of time living with a person, even my parents. She left a huge void.

Coming home to this empty house was unbearable. Living alone and working alone can make you feel very isolated. But my little Vixen had always been there before. Once she was gone the aloneness felt so much worse.

But was I ready to adopt another cat? Not really. It takes time to grieve for a lost family member, be that of the human or feline variety. It was kitten season at the local shelter, though, and I knew that little lives were at risk. They get so many litters brought in every day, and it's tough to find homes for all of them. The American Humane Association estimates that 71% of the cats taken to shelters don't make it out alive. Until I was ready to adopt an older cat, I thought it might help my state of mind a bit to foster some kittens...or an older cat, or whoever needed a little TLC outside of the shelter.

I drove across town to the county shelter and told them I was there to pick up a cat or kittens for fostering. I'd thought of getting a mother cat who was still nursing her litter, but the kind shelter employee who helped me said that might be a bit much for my first fostering experience. After a little Q&A session, she said, "I have just the right ones for you. They were brought in as strays, and they're four weeks old, just starting to eat solid food. We've all just loved them. They're a little too small to be neutered yet, and we haven't been able to get them to put on any weight here. Maybe you'll have better luck with them. They're about a four-week commitment."

She took the carrier I'd brought with me and brought it back filled with a huge quilt and two tiny yellow kittens. I got the paperwork filled out as they sat there, patiently waiting. Giving me a big dog crate to keep them in, accompanied by a stuffed duck toy to serve as their "mama," some instruction on watering down their food and using a paper-based litter so it wouldn't gum up their digestive system when they ate it, she sent me on my way.

The boys were quiet during the ride home. We stopped off at a nearby pet store on the way home to pick up a few necessities, and everybody oohed and ahed over them in their carrier as I rode them around on top of my cart. I was a little excited about having somebody in the house with me again. I set up their crate in the den and added a little litter box, their water bowls, bed, and a mirror so they could look at themselves. There was enough room in there for it all, they were so tiny!

It was hard to understand how the shelter folks couldn't have gotten them to gain any weight; they seemed to want to eat everything I gave them! I'd wet down some crunchies for them to soften them, and also give them a little canned food a few times a day that I'd thin to a pablum consistency with a little water. They walked in it, they ate it, they played in it, and they peed and pooped...a lot. There was certainly plenty of food and water going through their systems! They started growing a little.

But they were still tiny. My friend Carol, who's saved many cats in her day, came over to see them and was amazed at how small they were. "Oh, my God! I've never seen any this tiny before!" They loved to come out of their crate and climb on me, the furniture, and anything else they could get to. One seemed to be a little larger than the other, and a little bit orangier. I kept trying to think of good names, but my creativity wasn't up to snuff; well, after all, I was still in a period of grieving for my little Vixen. Nothing was coming to me.

I've always liked cat names that have a title in them, so for the orange one, I decided to name him Captain Roughy, like the orange roughy fish. But what to call his little brother? He was the little buddy of the two, so the name Gilligan seemed to settle on him. Not perfect, but they worked. These were only temporary names, anyway, as their eventual adopter would be free to change them to whatever.

Two weeks after getting them, I had to drive them back across town to the shelter for a check-up. With a funeral at my church to attend that same morning, I asked if I could leave them there until I returned. It made me nervous to do so; you're always reading stories about animals mistakenly being put down at shelters, so I was worried about them the whole time. But when I returned, they were sitting in their carrier, up near the front, patiently waiting on me. They hadn't quite gotten up to their neutering weight (2 pounds) yet, so I had a little more work to do. But they were doing quite well, so the shelter folks were pleased with how I was doing.

A Little Setback With My Foster Cats

That all changed over the weekend, however. One of them started getting some very nasty, stinky diarrhea. Who could tell which one it was, and it would certainly be spreading to the other one since they lived in such close quarters. I cursed myself for having left them there at the shelter, where they'd likely picked up a virus of some kind! Monday morning I put in a call to the shelter and they said to bring them in. So it was back in the car for the half-hour drive across town.

The boys had actually lost some weight over the weekend with the diarrhea, but they said it was a common virus and gave me some Clavamox to knock it out. I don't know if you've ever tried to use an eye-dropper to get bubble-gum-flavored liquid antibiotic down the throats of squirmy kittens with needle-like claws, but here's a tip: wear something that won't be ruined by the stains of bubble-gum-flavored liquid antibiotic. You'll end up wearing as much of it as goes down the kittens' throats!

The Clavamox worked, however, and soon The Golden Boys, as I was now calling them, were quickly packing on the weight. At their next check-up, they were up to the 2 pounds required for neutering, so I could schedule their appointment. And they were to go into adoptions immediately after the surgery. But by this time, there was no way anybody else was going home with my Golden Boys. I was smitten. The thought of their being separated was too much to bear; they so loved wrestling, chasing, and playing together, and they'd groom each other and curl up together for comfort. So I told the shelter I wanted to adopt them. "You know the rule for that, right?" "No; what's that?" "You have to continue fostering after you adopt them!"

Since neutering required an overnight stay, I was again a little worried. And they told me I had to be there by 10 a.m. the next morning to make sure they didn't go into adoptions, even though they'd put a hold on them as already having an adopter (me). A tremendous sense of relief came over me as I saw their carrier coming out that next morning, and my boys safely inside it! They seemed to have suffered no problem from their neutering surgery, and didn't even have any stitches.

Vets increasingly like to neuter cats very young, as they recover more quickly and suffer less complications, and there's absolutely no chance that they'll start to enter puberty before being neutered. That certainly seemed to be the case with my boys, as they were just as rambunctious as before the surgery. I was happy that they'd never start to spray urine or get roamy and aggressive like unneutered tomcats will do. They'd be sweet and innocent for their entire lives!

And that was a year ago today. The Golden Boys have become two very spoiled kitty cats! As my official product testers for Old Maid Cat Lady, they get to try out the cat trees, the foods, the toys...as well as the things they don't enjoy quite as much, such as going for walks in their stroller. They're starting to make little squeaky noises, but since they weren't around other cats for long, they probably don't really know much about what kinds of noises they're supposed to make! They have filled my life with love, once again, as did the cats who came before them.

If you've never fostered animals from your local shelter, consider doing so. It saves lives. And if you're feeling a little lonely, or if your companion animal is lonely while you're at work, consider adopting a shelter cat. Every cat adopted from a kill shelter saves two lives: that cat's, and the one who can now take his place in the empty cage there at the shelter. But they really also save a third life: yours.

All month, I'll be sharing stories of my rescued cats, along with shelter statistics, resources, and information on the no-kill movement. Feel free to share stories of your own rescued cats below!