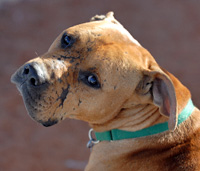 This is Luka, one of Michael Vick's
former dogs who died in 2013
in his new home at Best Friends Animal Sanctuary.

There's a story in the news about another huge dog-fighting ring being broken up, the second largest ever in US history. This is great news for dog lovers, but it's also good news for cat lovers.

Why? Because cats are often used as bait to train fighting dogs to kill. It's an especially brutal and horrible way for a cat to die, as the dog literally tears them to pieces while they're still alive. The cat's terrified screams only excite the dog's killing instincts more and more.

Kittens and female beagles are said to be the preferred animals to use in this way. It's unimaginable how anyone could do such unspeakable things to any animal. After merely reading an eyewitness account of a tiny kitten being sacrificed to a fighting dog, I felt sick, and still do every time that haunting memory enters my mind. I'll spare you the details of how the dog killed the kitten, as you don't need those pictures in your head.

Where do these horrible people get the poor cats they use for this? Sadly, it could be from you. Or your local shelter, or cat rescue. Some will have their wives dress up like respectable people looking to adopt, visiting different shelters and even using disguises so the shelters' staff and volunteers won't recognize them. They'll look on Craigslist for people looking to give away litters of kittens, most of whom are just happy that anybody will take them. Others will obtain them by cruising neighborhoods and rounding up any animals, cats or dogs, that they can get who are left outdoors unattended, including inside fenced yards.

So if you let your cats go outdoors, be aware of this very real threat to them. Stay with them when they're out, and don't let them wander the neighborhood.

And if you're trying to re-home a cat or a litter of kittens, do a little due diligence on the person who's offering to take them. Don't be in such a hurry to get rid of them that you'd just give them to anybody who offers. Start up a conversation with the potential adopter and ask a few questions. Consider asking for a small fee for them instead of just giving them away. Pay attention to what your instincts tell you about the people. Be especially suspicious if they want the entire litter.

We can't protect our cats from every danger, but having your cat stolen for such a horrific purpose is a preventable thing. Do what you can to protect yours!

Here's a link to the full story about the dog-fighting ring bust.
Posted by Lynn Maria Thompson at 1:04 PM

Email ThisBlogThis!Share to TwitterShare to FacebookShare to Pinterest
Labels: dangers for giving away cats, dangers for outdoor cats, dog fighting and cats, why cats should be kept indoors