Do You Have a Fat Cat? 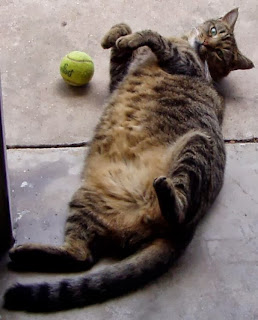 Do You Have a Fat Cat?

Today is National Pet Obesity Awareness Day, so let's take a look at the fitness (or lack thereof) of the average house cat in America today:

According to the Association for Pet Obesity Prevention's 2012 study, 58.3% of cats in the U.S. are overweight or obese. This equates to 43.2 million kitties with bulgy bellies. 29.3 million of them were said to be "overweight", while 13.9 million were actually "obese".

Even worse, many of their "cat parents" don't think their cats are overweight, so they're not doing anything to help their feline companions lose those excess pounds. A full 45.3% of the cat owners said their obese cats were of normal weight when given the choices of "too thin," "normal," "overweight," or "obese."

Part of that problem with perception is that our cats seem like featherweights in relation to our own body weights. But a cat that weighs 14 pounds is the equivalent of a man who weighs 237. A 15-pound  cat is like a woman of 5' 4" who weighs 218 or a 5' 9" man who weighs 254. Obviously, one pound makes a lot more difference when it's on our cats. Here's a handy chart to help you figure out what your cat's actual weight equates to in human terms. 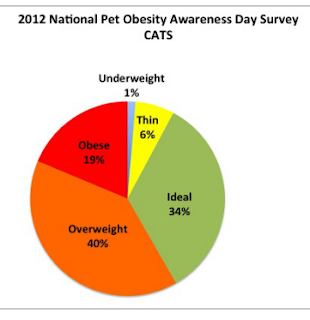 Why Worry About an Overweight Cat?

The number one reason to be concerned about a cat being overweight is that obesity can lead to diabetes in cats. This is a serious condition that can lead to fatal ketoacidosis with a host of symptoms, or diabetic neuropathy in which the cat loses use of the rear legs. Feline diabetes may require treatment by oral medications (ever try to give a cat a pill?) or insulin injections (ever try to give a cat a shot?). You'll have to take blood (that can't be fun) to check kitty's blood sugar. Frequent visits to the vet are required to regulate the effectiveness of the treatment. So not only will your cat's quality of life suffer, yours ain't gonna be so great, either.

Just like with us, cats who are overweight run a higher tendency toward heart and respiratory diseases. They are more likely to have hypertension (high blood pressure). They may also be at a higher risk for abdominal cancers. All of these diseases shorten their lives.

Even worse, hauling around all that extra weight can cause cats to develop musculoskeletal complications that result in pain from osteoarthritis in the joints and connective tissues. Veterinarians report seeing more and more pets for joint problems that could be avoided by controlling their weight. Some even require surgery!

And if you're counting your pennies, those extra pounds can mean thousands of dollars in additional vet bills for medications, surgeries, and supplements to deal with these health issues that could have been prevented by proper weight management.

Why Are Our Cats So Overweight?

Probably for the same reasons we are: they're eating too much and exercising too little. In the wild, cats would spend most of their time hunting for their food. This means a lot of walking, climbing, stalking, leaping, chasing, playing with, and killing their prey. And once it's dead, they've got the work of tearing the edible parts from the carcass and eating them before other predators steal their dinner from them. No wonder big cats in the wild are so svelte!

Our domestic cats have things so much easier. They lie around all day while we're at work, and receive sumptuous meals without lifting a paw. Most people tend to overfeed their cats, not even paying attention to what's recommended on the packaging as an appropriately sized meal. The right amount seems like so little! And people forgo play sessions with their cats in favor of a little more time working, or online, or out with friends, or watching TV, or...well, you get the picture. Are we substituting food for the time our cats want to spend with us, out of guilt for the time we're spending working instead of playing with them? Perhaps. And we need to stop it.

My cats come and get me when I've been sitting at the computer too long. They're still fairly young, and they have a strong play instinct. They're not happy lying around sleeping all day. While they do chase each other, play together, and climb their cat trees quite a bit, they long for interaction with me. And it's good for me, too, to get up and dangle one of their toys for them for a few minutes. It's a nice mental break and gives me a little exercise, as well. We'd all be healthier if we took several play breaks during the day!

What we're feeding our cats is also a part of the problem. Many of us opt for the convenience of dry cat foods. Most veterinarians wouldn't advise it. One cup of dry cat food contains anywhere from the low 200s to almost 600 calories! Get calorie counts by brand name here. Additionally, all dry foods contain carbohydrates not needed by our cats' bodies. As obligate carnivores, cats need a diet made up almost exclusively of meat-based protein to be healthy. Ideally, less than 10% of a cat's diet should be made up of carbohydrates.

Canned cat food is much healthier for a cat than dry food. It contains more water to help with a cat's hydration, which is important for urinary tract health and also helps the cat feel fuller. But all canned foods are not created equal; many include some nasty stuff that can even include the ground-up remains of cats and dogs killed at shelters! Read the labels to make sure that the food is predominantly recognizable meat. "Grain-free" is a popular labeling point these days, but those foods could still contain large amounts of potatoes or peas. Neither are something a cat would eat naturally in the wild. Here's a handy chart showing the nutritional composition of some canned cat foods.

Healthiest of all is a raw food diet. Although a bit pricey up front, these will save you money on the back side by keeping your cat healthier for the entire length of his life. They used to be hard to find, but as more companies are making commercial raw diets, more pet stores are stocking them. Cats fed a raw diet have better oral health, better digestion, less smelly poop (yes, really!), a more lustrous coat, and a better mental disposition. But you don't need a commercial food to feed your cat a raw diet. You can buy raw meat at the grocery store and feed your cat a raw diet on your own, but I'd suggest getting a book on the subject before embarking on this route; we carry a few of them here.

Taking Those Pounds Off Kitty

If your cat's already put on the pounds, there are healthy ways to take them off. Unlike humans, cats cannot fast. Going without food for as little as two days can throw a cat's system into a life-threatening liver condition known as hepatic lipidosis. So it's important to use caution when addressing your cat's weight issues.

Start with a visit to your veterinarian. This can tell you how much your cat actually weighs, versus kitty's ideal weight. Your vet will probably also be able to give you some guidelines on the daily caloric limit you should shoot for. Start measuring your cat's food and resist the temptation to overfeed. Automated feeders can help if your workday is long. These have timers to open when it's time for your cat to eat, instead of your just putting out a huge helping that will be gobbled all at once, or left untouched for the flies to invade as it spoils in the dish. Some even have an ice tray underneath to keep the food fresh!

Try to take the weight off your cat gradually, not too quickly. A loss of about one pound a month is plenty. It may not seem like a lot, but remember those conversion charts discussed above. When you think about it as a percentage of your cat's total body weight, one pound is a much larger amount. Excessive weight loss can lead to other health problems, which is what you're trying to avoid in the first place! Follow-up visits to the vet will help keep you on track here.

Obviously, keeping your cats from ever getting overweight in the first place is preferable. The information and resources on feeding provided above should give you some valuable tools to feed your cat a healthy diet. Pay attention to the daily feeding recommendations and don't let your cats just free-feed whenever they feel like it: they'll end up eating out of boredom, just like some humans do!

But just as with us, exercise also needs to be a part of your cat's weight loss regimen. Cats exercise by playing. They are highly intelligent and enjoy mental stimulation in their play. Make sure they have cat trees (yes, that's plural) they can climb, and places to go when they get up there. If you've ever seen Jackson Galaxy's show on TV, he talks about "catifying" your home with high shelves and walkways cats can explore. These are a great way to get your cats moving more.

Most cats love dangling toys. Mine love their Cat Dancer; it's been a favorite of almost every cat I've ever lived with. Simple is often the best when it comes to cat toys! Laser pointers give them something to chase. And there are several companies that make the track toys with a ball inside that the cats can bat around.

Change up the cats' environment every now and then by moving their cat trees or favorite toys to a different place. Puzzle toys in which food is hidden are also useful tools in making cats work for their food, just like in the wild. Treat-dispensing balls will let them chase around their meal. One of my cats likes to knock his food out of the dish and chase it around on the floor before eating it. It's his way of giving himself a little "hunt" to go on for his dinner. And it's cute as can be to watch, too, albeit a little messy to clean up!

Don't neglect the interactive aspect of playing with your cats, either. This makes them happier and mentally healthier. It cements the bond between you and makes your cats more affectionate toward you. It also makes them friendlier toward people in general and not so frightened of strangers. They now relate humans to a positive, play-related experience that gives them a healthier outlook toward their two-legged companions.

Will the 2013 numbers show an improvement in feline obesity numbers? We shall see, but let's all start working on making those numbers go down for 2014 by using some of these helpful tips. Get that portly Pixie-Bob (sorry, I couldn't resist) movin'!