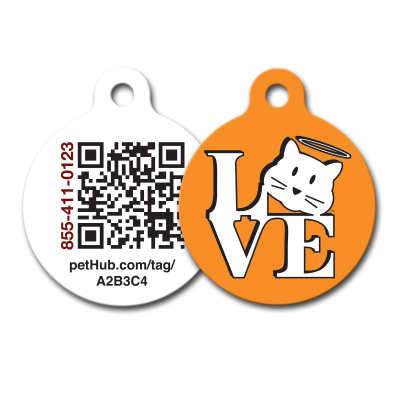 If your cat gets lost how will kitty find his/her way home? Sure, cats like to explore and if you let yours outdoors (or if your cat accidentally gets outside), we can sometimes have some sleepless nights wondering if our beloved cats are okay. Who's to know whether kitty is just on an extended hunting trip, has been injured or trapped somewhere, or if some ne'er-do-well has absconded with him?

Many dangers await cats outdoors. There are toxins like antifreeze, lawn chemicals, and slug bait. Even some of the lovely flowers in our spring gardens, like lilies, can be toxic to them. There are dogs who'd like to chase or even kill them. There are pests like fleas, ticks, and mosquitoes who want to make a meal of them, and possibly also transmit parasites or diseases to them. There are cars and trucks on busy highways to injure or flatten them. Worst of all, there are people who hate cats and would either do harm to them, or steal them to sell at a flea market or to research labs.

Yes, the world is a dangerous place for cats. Indoors is the safest place for them. But not all cats take well to a completely indoor life. In my experience, boy cats especially like to get outside and explore their wider territory. You can take them outside on a leash and harness, or in a stroller. What they really want, however, is to be able to roam freely about their territory, to explore every nook and cranny unimpeded by human interaction. Many folks feel that it's perfectly fine to let their cats roam outdoors. Without a safe enclosure, those kitties can get lost. And here come those sleepless nights!

But you can minimize that worry by making sure your cat can find his way home to you if he becomes lost. Did you know that less than 5% of the cats who go into shelters are reclaimed by their owners? It's true! Yet many are the tales of cats who traveled miles to find a beloved owner who had moved. Or who are reunited with their families after years of being lost. You have several options on making this a more likely outcome in the event that your cat gets lost while outdoors.

The Microchip Option for Cats

The reuniting element in a lot of these stories is a microchip, embedded into kitty's shoulder area and scannable at a shelter or veterinarian's office. Shelters often microchip all the animals they adopt out these days. My Golden Boys both have microchips that were inserted into their shoulders when they were just tiny babies. The chips are about the size of a grain of rice.

But don't be lulled into a false sense of security by thinking that all shelters or veterinarians automatically scan every animal that comes into their facilities. Many do not. And if someone finds your cat and decides to keep him, the chip is not visible and they may never take him to any place that would think to scan him for a chip. The chips can also migrate within your cat's body, or even fall out if not completely inserted properly. In these instances, they wouldn't show up during a scan.

Additionally, there are different types of microchips. Four different technologies are in place in the US, and most scanners can't read them all. Choose one that's not the same as your local veterinarians' or shelters', and your cat may still not be locatable if scanned. A Canadian chip maker is now marketing its product in the US, and their chips can't be read by any of the US scanners. So be aware of the type of chip being put into your cat.

All microchips can interfere with an MRI, a type of medical test that's increasing in frequency for pets as veterinary care becomes more advanced. They're still not cheap, however, and most of us won't be having one done on our cats. It's up to you to decide if the benefits of microchipping outweigh the risks.

At least one chip maker, Merck, is being sued with the claim that their chip caused cancer in a cat. The cat in question was a nine-year-old neutered male who developed a fibrosarcoma like those some cats develop at the sites of vaccinations in the area where his microchip had been implanted. Apparently, such cancers are being discovered at an increasing rate. So if you do elect to have your cat microchipped, it may be a good idea to have the shelter or vet tell you what brand of chip they're using.

And one final caveat: if your cat is microchipped, it's also important to make sure that your contact information is updated with the chip registry company whenever you move. Otherwise, your kitty may still not get home safely. Do you even remember where that paperwork or website is, so that you can update it?

The ID Tag Option for Cats

For those who aren't crazy about the microchip, you can always put an I.D. tag on your cat. This requires that your cat wear a collar, however, and as you know cats need collars that are easily escapable to avoid choking. If the collar with the ID tag comes off, it won't do a lot of good in getting kitty home. Some municipalities require that cats, as well as dogs, wear ID tags if they go outdoors. If your cat is microchipped, you can also get a tag to tell anyone who finds her that she's chipped.

The problem of the tag coming off with a collar could be addressed by putting your cat's ID tag on a harness. Cats will adapt to wearing a harness fairly easily, and one that fits snugly won't come off while the cat is out on an adventure. Harnesses are also easier to spot than a collar, readily identifying your cat as one that is owned and not a stray or part of a feral colony.

PetHub's ID tags are high-tech in that they have a QR code on them. You register your information on the PetHub website and associate it with the code on your cat's tag. Anyone who finds your kitty wearing one of these tags need only scan the code with a smartphone to report that they've found your cat. It works just like an external microchip! The line of PetHub tags for cats is being added within the next week to OldMaidCatLady.com, as soon as their new catalog is released! This post will be updated with a link to them as soon as they are available.

But even on a harness, an ID tag is not fool-proof. Someone who intentionally steals your cat can easily remove it. Your cat may get lodged somewhere and cause the tag to come off accidentally. When used in conjunction with another method, its effectiveness goes up considerably.

The Tattoo Option for Cats

We're not talking alternative culture-style ink here for kitty; these types of tattoos used to be commonly used to identify valuable show cats and racing dogs, but have fallen out of favor with some cat owners in recent years. They involve a number that is registered to the owner, so that someone finding the cat with that tattoo can know that it belongs to someone. Supposedly, half of all cats with a tattoo get safely returned to their owners when lost.

Tattoos take 5-10 minutes to apply to the cat, and may cause some local pain and scabbing when done. They should always be done by a veterinarian, not a regular tattoo artist. The number is typically placed on a cat's ear or the inside of the back leg. And just as with a microchip, you must register it with one of the tattoo registries so people can find you when they find your cat. There are multiple companies in this business, so you have the same problem as with the microchips: which do you choose? (Tattoo-A-Pet is the largest registry service.) And will the person who finds your cat know that?

The tattoos are not always easily visible, either; they may require shaving to find. Those in the ear are easier to see, but aren't especially pretty, so they would mar your cat's beauty. Ears can also be easily cut off by an unscrupulous person who might steal your cat for nefarious purposes. And tattoos feature no information about where to call or email with the number, so someone unfamiliar with this system would have no clue what the number means. Just like with tattoos on human skin, they fade over time. And you wouldn't want to have one done on a kitten, because growth of the cat will make the tattoo illegible by the time he's an adult.

In the state of Virginia, being in possession of a tattooed cat that does not belong to you can even cost you some money: if you're discovered, the fine is $1,000 or a year in jail! Virginians apparently take their cat ownership very seriously.

There's also another way tattooing is protective for your cat: federal law states that any laboratory found to be in possession of a cat that has been tattooed will lose their license. So someone who may have been stealing your cat for sale to a research lab won't be able to do so. It's awful to think of, but this happens all the time.

Some shelters still use tattoos on the inside of a rear thigh to indicate that a male cat has been neutered. Once the hair grows in over them, they're not visible, either. My little Frankie had one from the local humane society that was revealed when my vet shaved his tummy to check for a spay scar, since we thought at first that he was a girl! And females don't always get the tattoos because their spaying scar is easily identified, but some shelters give them a tat, as well.

This method of identification is typically only used in managed feral cat colonies. It indicates that the cat has been trapped, spayed or neutered, usually vaccinated against rabies, and returned to the colony. For cats that are eventually adopted, it's always a reminder that they were once feral, and it does mar the cat's natural beauty of having two whole ears. It used to be that only a small tip of the ear was taken, but the more recent practice is to lop off about half of one ear to make the ear-tipping more visible to a colony caregiver.

An owned cat would not be a candidate for ear-tipping. And it also wouldn't help your cat get home if he's lost because it doesn't give a rescuer any information about you or how to contact you. It may, in fact, cause someone to think that your cat is still part of a feral colony.

Now it's possible to have DNA samples on file for your cat. Other companies offer nose-print registries, although these are mainly for dogs. Cats' noseprints are also as unique as fingerprints.

PetLynx is a Canadian service that will accept registries of all types: microchips, tattoos, or any of these other methods, to identify your cat. Australia has the National Pet Register. At this writing, there's no comparable service in the U.S., although there are several that allow someone with a lost or found cat to register there.

Whichever method you choose, it's a good idea to give your kitty some type of help in getting home in the event that he or she gets lost outside!
Posted by Lynn Maria Thompson at 5:49 PM