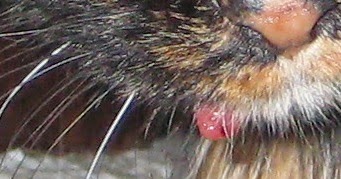 Toward the end of her life, my little Vixen developed a lesion on her lower jaw. It didn't seem to bother her, but looked awful! The place would occasionally fill up with blood, then burst and scab over. But it never went away.

I never did figure out what that lesion was, despite a trip to the vet. But a recent post about a similar condition on Facebook prompted me to do more research and see if that was what she had. I'm convinced that it was. So here's the scoop on it!


What is Rodent Ulcer?

Also called feline indolent ulcer, this condition is found only in cats. A type of skin cancer in humans is also called this, but the conditions are not at all related.

Rodent ulcers affect the lips, chin, or mouth. Any age cat may suffer from them, although younger and middle-aged cats seem more prone to them than do older ones. They may be seasonal in some cats, only occurring in the spring or fall. In others, they may happen at any time of the year.

Rodent ulcers are part of a larger disease group known as feline eosinophilic granuloma complex. This group also includes other types of lesions that affect a cat's abdomen, thighs, face, tongue, or palate. All are inflammatory lesions that may have the same underlying cause, and all respond to the same types of treatment.

Female kitties are three times as likely to get these ulcers as are males. My little Vixen had one on her lower lip (shown above) that lasted for the last couple of years of her life. It's been written that cats younger than seven years are more prone to them, but Vixen was over 20 years old when hers showed up.

There's no real reason for the word "rodent" to be in the name, as this has nothing to do with rodents. One theory on why it's called this is that people used to believe that cats caught these from rats, or that they were caused by a rat biting the cat, although this is not actually the case. Another theory is that the ulcer's tendency to "nibble" away at the tissues along its edges is similar to how a rat nibbles at something.

What are the Symptoms of Feline Rodent Ulcer?

The first thing you may see is a shiny spot that looks yellow or pinkish. It may also appear as a blister. Vixen's actually looked more black. Over time, the spot will deepen and transform into an open sore. The sore may appear in several locations in or around the mouth:


The ulcer does not seem to bother the cat at this stage, neither itching nor causing pain.

The ulcer on Vixen's chin would periodically fill up with blood, then burst and scab over. But instead of going away, it would recur once the scab came off.

As a rodent ulcer grows, the cat's lip may begin to erode. The swelling may even expose kitty's teeth, gums, or nasal cartilage. When this happens, it may cause the cat to avoid eating due to discomfort, pain, or difficulty eating normally. Some ulcers may emit a foul odor.

Cats who are more feral may exhibit behavioral symptoms as a reaction to the discomfort of a rodent ulcer. These can include avoidance of interaction with you, hiding more than usual, or aggression.

Once cleared up, the ulcers often recur. If they had advanced to the point of eating away at adjacent tissues, the disfigurement of your cat's face will likely be permanent. If they first occur in a younger cat, the cat may outgrow the condition.

Your cat has different types of white blood cells. Eosinophils are the ones that fight allergens and parasites. When tissues of the body become irritated, they get inflamed. In response to that inflammation, the body floods that area with cells to respond to the attack. When they reach the affected area, the eosinophils and granulocytes, another type of white blood cell that fights parasites and germs, release their granules to fight the invader. These can pool and form a granuloma, which is the growth we see.

That said, the root cause of rodent ulcer is unknown. Because it's not a life-threatening disease or one that inflicts much suffering on a cat, this is not something that draws a lot of research dollars. Most vets view it as an extreme allergic reaction to something.

Theories on its causes include:
Cats may be allergic or sensitive to substances such as fleas, dietary additives, pollen, dust, fungus, roach droppings, or any number of other things. Dental infection may also contribute to rodent ulcer. Certain cats may even be genetically predisposed to developing it, although studies have not been conducted on this.

Some believe that inflammatory bowel disease (IBD) may contribute to the development of rodent ulcers. Since the immune system is maintained in the body's digestive tract, this would make sense. Both are immune-system responses to opposite ends of the digestive tract.

There is no known link between rodent ulcers and the feline leukemia virus (FeLV), although some cats who have been exposed to it have developed them. Their presence on cats exposed to the virus is one of the reasons a link to an impaired immune system is suspected.

How is Feline Rodent Ulcer Treated?

This is one that requires a trip to the vet. When little Vixen's first appeared, it looked black and I suspected it may be a tumor. My vet took a sample of cells from it to check for cancer, but that came back negative. Your vet may refer you to a feline dermatologist so that your cat can be skin-tested for allergies.

Because there are so many possible causes for these ulcers, there are also multiple possible treatments. Your vet will help you determine which of the possible causes is affecting your kitty so that you can pursue the best course of treatment and avoid recurrence.

The most effective treatment of rodent ulcer is usually a steroid like cortisone given in combination with an initial antibiotic (clindamycin or Clavamox®) to prevent a secondary bacterial infection. The cortisone may be given in pill form (prednisone) or injection (Depo-medrol) given in three doses spread two weeks apart. Prednisone pills can be given daily until the ulcer disappears, but depending on the cat's mouth condition from the ulcer, giving pills may not be an option.

For persistent cases that do not respond to steroid + antibiotic treatment, some vets advise radiation therapy or cryosurgery in combination with cyclosporine or interferon. This is only indicated when the ulcer is causing your cat major problems. Injections of gold salts have also been used for difficult cases.

Natural treatments that will support the steroid-antibiotic therapy include essential fatty acids (EFAs) such as fish oil, although these will not make the ulcers disappear on their own.

How Can I Prevent Feline Rodent Ulcer?

Some have found that removing plastic or rubber food and water bowls takes care of the problem. The best material for cat dishes is stainless steel, as it does not get the little bacteria-harboring scratches in it that softer materials do.

Some rodent ulcers appear to be caused by flea allergies, so keep your kitty and your home free of fleas to address this cause. Frequent cleaning also removes other environmental allergy triggers, but be sure to use cat-safe cleaning products.

Hopefully your kitty won't fall victim to any rodent ulcers, but if you see one, at least now you'll know what to do about it!