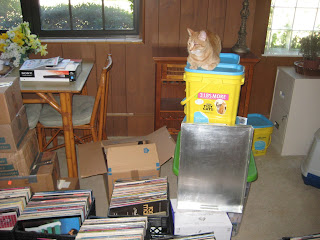 This has been an emotional time for me. I'm saying goodbye to what's been my family's home for 50 years. It's been my home since I was eight. Even during the years when I didn't live here, my parents did, so it's always been a "backup" address for me. Not so after February 22, when movers are coming to take all my things away after I sold the house to some of the developers among many who are transforming this small beach community into its next phase.

Moving is not fun anyway, but when you have cats involved, it ups the ante a little. We'll be moving into a friend's already-furnished condo for a few months while I find a new house and get it bought and prepped for us to move into. My furniture is going into storage until then. The Golden Boys, AKA Captain Roughy and Gilligan, have always been indoor cats since someone brought them to my local shelter and turned them in as strays when they were only four weeks old. This is really the only home they've known. How will they take to a new place?

They know something's up with all the boxes and my activities in packing to move. And they undoubtedly have been picking up on my heightened emotions, as well. They've remained close to me at all times. I'll occasionally see a concerned look on one of their faces as I'm trying to work out another of the challenges of moving while also keeping the OldMaidCatLady.com                                               retail site operational. As usual, when facing a new situation involving my cats, I'm taking it as an opportunity to write about the process in the hope that my experiences will help others facing the same thing.

Past Moves With Cats

When it comes to moving with my feline companions, this is not my first go-around. The first two cats I moved with went locally from one apartment to another, and then from Jacksonville to Atlanta with me and back a few years later. One, my little Vixen, was a dream to travel with. She was quiet in the car, seemed to enjoy being up high enough to look out the windows at the view, and would look to me for explanation and reassurance whenever we stopped.

My black kitty, however, was not an ideal traveler. He yowled the entire time - not too bad on a move from one neighborhood to another, but on the six-hour drive it got a bit monotonous. For the final 45 minutes of the drive he fell asleep, exhausted, in my lap with his head on my arm that was holding the steering wheel. "Please, God," I prayed through frazzled nerves, "don't let me have to turn this steering wheel and wake up this damned cat!"

Once in Atlanta, those two had a difficult adjustment period, with a couple months they had to live in the bathroom of a cousin's condo we were cleaning out for us to move into. My formerly beautiful house panther licked out most of the fur on his tummy and threw it up all over the bathroom. But once they had run of the whole place, they were fine. His tummy-fur grew back in and everything was just as it had been before.

Preparing For A New Housemate

But acclimating to a new location is not the only adjustment the Golden Boys will have to make. My friend has a mostly outdoor cat named Roz who comes inside to eat. Roz has a tipped ear, indicating that she's been part of a Trap-Neuter-Return colony at some point. With both of my friend's indoor cats now passed on, she's been reluctant to bring Miss Roz inside permanently. I've been feeding Roz whenever my friend has been out of town, just as she comes over and feeds the Golden Boys when I travel. So I know Roz and she's comfortable with me.

Roz, however, is also a bit skittish; I was visiting my friend, who's also packing to move herself, and the mere act of my ringing the doorbell freaked out the poor kitty so that she bolted for the door to get back outside. I'm hoping to be able to transition her to an indoor kitty so that my friend can eventually move Roz to her new home with her; she'd like to do that, but is afraid poor frightened Roz will try to get back to the area around the condos where she lives now. That happens a lot when cats are relocated against their will. And with multiple busy highways and the Intracoastal Waterway between the two locations, that would not likely end well for little Roz.

My boys are the cutest things ever when they groom each other and curl up together, but they're littermates who have been together every day of their lives. How will they react to a stranger who's suddenly in their living environment? Or, more accurately, when they're in hers? They can play rough, and they can be hostile when frightened, so I'm afraid they will try to chase poor Miss Roz out of her home, traumatized beyond the point of ever returning.

To prepare the Golden Boys, I've been talking to them and picturing Roz, telling them all about how nice she is, how we'll soon be living with her temporarily, and how they should be little gentlemen kitties to her. I picture them playing and even curled up in a bed together, all three of them. They don't seem to be listening, but I'm counting on repetition and my positive mindset when doing this to eventually get through.

We're also exchanging items that contain our cats' scents so that the others can get accustomed to them. I'm taking the rug out of my hallway, where the boys love to burrow and play, and a Cat Crib that's under a chair in my bedroom. A week from today, I'll be moving the boys' furniture and taking them over to the condo, so they'll have a week before the actual move to familiarize themselves with the other cats' scents.

If things get ugly, I also have their tall crate I can assemble in one of the condo's bedrooms and keep it up as a place of safe refuge - or forced separation - for them. Roz would be able to eat in peace, spend a little time inside, and perhaps even approach the boys when she's ready, on her own terms. I'm hoping that in the few months we're in the condo, her comfort level with the boys will rise. It would be delightful to see them all frolicking and playing together, with Roz content to live indoors all the time. That's the vision I've been sending to my boys.

As the process continues, I'll post more about what it's like in this move with my cats. We'll see how they do, and how they and Roz adjust to their brief period of cohabitation.

Oh, and another thing I've discovered: empty cat litter buckets make great containers for moving things like toiletries, cleaning supplies, and other small items! They hold a fair amount of weight, are waterproof, have a nice carrying handle and a lid that snaps shut. And they stack up quite nicely in the warehouse, with a sticker on the side telling me exactly what's in each of them. Makes me glad I had so many of them stacked up in the garage!
Posted by Lynn Maria Thompson at 4:17 PM

Email ThisBlogThis!Share to TwitterShare to FacebookShare to Pinterest
Labels: how to prepare cats for a move, moving cats, moving with cats