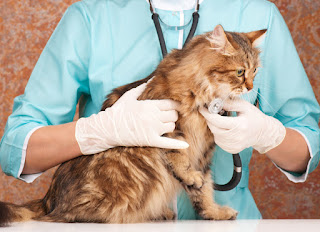 The title of this post has a dual meaning: first, a cat who has hypertrophic cardiomyopathy (often referred to merely as heart disease) has a defect in the heart; it can be thought of as being broken. And secondly, if you receive this diagnosis for your cat, your own heart may break from the dire prognosis of an uncurable condition that will most often progressively worsen.

But it's also the most common heart condition that veterinarians diagnose in cats. So let's take a closer look at HCM.

What is Feline HCM?

In a healthy cat's heart, the left ventricle receives newly oxygenated blood from the lungs and pumps it through the aorta to the various parts of the cat's body. The left ventricle is where the heart's mitral valve is located.

In a cat with HCM, the muscles and walls of the left ventricle become abnormally thickened. Most simply expressed, this puts additional stress on the heart that can have a variety of effects.

When the hear muscle thickens, it can scar, grow stiff, or weaken. The left ventricle fills with blood as usual, but the muscle cannot relax properly. This may result in either the accumulation of fluid around the heart or a heart murmur.

HCM can affect other areas of the heart, but the most common is the left ventricle.

What Causes HCM in Cats?

That's a good question. If cat health studies received the same amount of funding as dog health studies, we'd probably know for sure. As it is, here's what we've discovered so far.

Most veterinarians agree that there is a genetic component in HCM. Among purebreds, Maine Coon and Ragdoll cats have a higher incidence of it. Approximately a third of all Maine Coons test positive for the genetic mutation that makes them more likely to develop HCM. And more recent studies have identified mutations of a specific protein in the hearts of certain Maine Coons and Ragdolls that supports this genetic theory. There has also been a link discovered in American Shorthair, Persian, Himalayan, Burmese, Sphynx, and Devon Rex cats.

HCM seems to strike cats mainly between ages 5 and 7 years, but cases in cats as young as three months and as old as 17 years have also been reported. The juvenile form seems to especially affect Ragdolls. Both Maine Coon and Ragdoll cats can carry a genetic mutation that makes them more susceptible to HCM. Male cats are also more prone to it.

But don't think that your cat is immune because you have a regular domestic shorthair instead of a purebred cat; plenty of DSH cats can also develop it.

The Winn Feline Foundation has funded several studies on HCM. Thanks to them, we know much more about it than we used to. After Dr. Steve Dale lost his beloved Cornish Rex, Ricky, to HCM, he started The Ricky Fund with Winn to raise money for feline health research.

What Are the Symptoms of HCM in Cats?

Some cats have no symptoms at all, until they suddenly die of a heart attack. Or your veterinarian may discover abnormalities in the cat's heartbeat during an exam that warrant further exploration.

Other cats may show symptoms of heart failure. These include difficulty breathing or breathing with the mouth open, and becoming more lethargic than normal. Your cat may seek additional warmth, as the body temperature will drop a bit from a cat's normal 100.5 to 102.5 degrees Farenheit. Not feeling well may affect kitty's appetite or cause vomiting. The paw pads or claw beds may turn a bluish color from lack of blood circulation.

In the most severe cases, cats will develop a sudden lameness and severe pain in the rear legs. The rear legs may feel cold to the touch, as they are not receiving blood flow. The rear paws may be turned under (knuckling). This is due to a blood clot being thrown by the heart into the iliac artery or terminal (distal) aorta. This condition is also known as a saddle thrombus or a Feline Arterial ThromboEmbolism (FATE). It is a veterinary emergency.

If you notice any of these things, make notes on your cat's symptoms and take them to your veterinarian when you take the cat in for examination. Testing to determine whether the symptoms indicate HCM include an electrocardiogram, ultrasound imaging, chest X-rays, and other tests to rule out high blood pressure or an overactive thyroid. If you have access to one, it is best to have these tests performed by a veterinarian board-certified in cardiology, radiology, or internal medicine.

Breeders of Maine Coons and Ragdolls can do a cheek swab to test for the genetic mutation in those breeds that is associated with HCM.

Can Feline HCM be Treated?

There is no cure at present for HCM in cats. But the condition can be managed if caught early. In some cats, it stabilizes and they are able to live a normal life with it.

Just as with human cardiac patients, a variety of drugs are available to control your cat's heart rate, fight congestion in the lungs, remove excess fluid in the body, and thin the blood to prevent clots. Some may be given at the vet's office by injection, while others can be given orally at home. In certain cases, your cat may even get nitroglycerine by applying it to the skin. You'd be amazed how similar the regimen is to that of a human patient with heart disease!

You'll want to restrict sodium in your cat's diet to keep blood pressure under control. Minimizing stress for your cat is also important. Kitty will need to refrain from strenuous exercise.

Keep an eye on your cat to see if the symptoms continue, improve, or get worse. Especially note breathing rate (breaths per minute) and write down these numbers in a log with dates and times of each count. If you notice the number rising above 40 breaths per minute, it's time to visit the vet again. Watch for lameness in the rear legs, as well. If you see that, your visit will be an emergency one.

Depending on the severity of the disease, a cat diagnosed with HCM may live for years. However, the quality of life will likely decline over those years. It is most often a progressive condition, and the drugs will not halt this progression. In cases with a saddle thrombus, the prognosis is not so good.

Older cats suffering from high blood pressure or an overactive thyroid gland can show symptoms of HCM without having it. But if they do get an HCM diagnosis, the other two conditions further complicate their treatment regimen.

Most cats with HCM eventually develop congestive heart failure (CHF). Fluid builds up in or around the lungs, making breathing difficult. This condition also warrants a trip to the veterinary emergency room.

When HCM affects a younger cat, the disease usually progresses quickly. Just as with human heart patients, there's no way to put a number on how long your cat may have to live with this condition.

Can Feline HCM be Prevented?

Not at this time. There is a blood test that can be conducted on Maine Coons and Ragdolls to look for the genetic markers that indicate the probability of developing HCM as low, moderate, or high. Breeders are advised to have an annual echocardiogram performed on cats in their breeding years. The Winn Feline Foundation also advises them not to breed cats at all who test positive for the cMyBP-C gene mutation.

Sphynx and Devon Rex cats can receive echocardiographs periodically as screening. And a normal result on a blood test called NT-proBNP can rule out HCM in cats exhibiting some of its symptoms, but can also show false positives in cats without symptoms.

The Winn Feline Foundation also recommends that the body of any cat who dies suddenly or dies from HCM undergo an autopsy to verify the disease and document its effects.

To support further research on HCM, you can make a donation to the Winn Feline Foundation's Ricky Fund, begun by animal expert Steve Dale in memory of his cat. As February is American Heart Month, it's the purr-fect time to do so!