Protecting Your Cat From Attacks 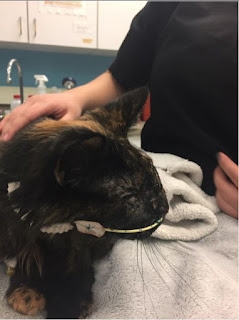 This is the least upsetting of the photos of Rogue.

Protecting Your Cat From Attacks

I don't often share photos of injured cats on this blog, but this cat's situation makes an excellent point. It only takes a moment for a loose dog to injure your cat, possibly fatally. Little Rogue, shown above, was attacked by a dog in her building. Her family brought her to a local rescue group because they didn't have a regular veterinarian.

Rogue's owners didn't even seek medical treatment for her until a few days after she was attacked, likely due to cost. There was a fundraiser to cover Rogue's medical bills going on through the rescue group that is trying to save her. Some of the photos of her injuries there were quite upsetting to see. The details of her condition were no less upsetting. Having loved a tortie for many years myself, it's especially distressing to see one in such condition.

What are the takeaways from little Rogue's case? How can you prevent the same thing from happening to your cat? Here are several that spring to mind:


I once knew a girl whose cat was pulled from her arms and killed right in front of her by a loose dog in her neighborhood. It's difficult to imagine, and impossible to overstate the dangers present for cats outdoors. There's a tale of someone's Savannah cat who got out and was roaming the neighborhood. While they were still looking for it, someone shot their cat dead, thinking it was an escaped wild cat from the zoo who was "stalking" the neighborhood children.


Again, my apologies for sharing such awful stories with you. But the fate that befell little Rogue does not have to happen to any other cat. Our cats depend on us for protection and safekeeping. Let them enjoy being cats, but remember to be vigilant! The world is a dangerous place for a kitty.

Posted by Lynn Maria Thompson at 9:02 AM