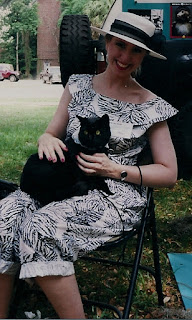 Today is Black Cat Appreciation Day. Usually celebrated in October in the UK, the American observance is held in August. Many shelters and cat rescue groups offer discounted adoption fees for black cats on this day.

Why a special day for black cats? Statistically, they get adopted less often than other cats in shelters. Folks who work in animal rescue decided to draw attention to these beautiful "house panthers" by dedicating a day to celebrating them.

It's a mystery to me why black cats should be less desirable to people as pets. They are sleek, gorgeous companions, with personalities just like any other cat.

Aside from looking like panthers, what's so great about black cats? My first cat was a black cat and several of my friends have lived with black cats, so I can speak to this.

Minuit was a very talky fellow who adored me and was never happier than when he was with me. He loved to walk on a leash and harness, which always drew stares and comments. People were always telling me that he looked like a miniature panther.

When I briefly lived in a friend's condo where she cared for a feral black cat and needed time to prepare a place for her before coming to get her, I got to know Roz and found her to also be quite talkative and confident.

The association between black cats and bad luck most likely originated in the Middle Ages. This happened because witches represented the old pagan religion to the Church in Europe. When people turned to a witch instead of a priest to solve their problems, it threatened the growing power of the Church. If our current political climate teaches us anything, it's that getting in the way of anyone's power creates enemies who will stop at nothing to hold onto that power!

An old Celtic belief said cats were actually humans who had done something bad and been forced to return to earth as a cat. The Greek Goddess Diana's cult was also associated with black cats. Church leaders thus began to link cats -- and especially black cats -- with witchcraft. Because cats were favorite pets of women, who were most often linked to witchcraft, this made them convenient scapegoats. Feline "familiars" were accused of carrying out the evil deeds assigned to them by their witch companions.

Many sources cite the official Papal bull Vox in Rama, issued in the early 1230s, as the first where the Church called black cats an actual incarnation of Satan. The bull included a detailed description of the rituals of a cult known as The Cathars, many of which involved a black cat and a half-man-half-cat being. This document was used as an excuse by many to eradicate as many black cats as possible.

Thousands of cats were tortured and killed in Europe and early America, along with their owners who were deemed witches. Ironically, those cats could have helped them avoid one of the largest pandemics their world had ever known -- the Black Death, bubonic plague, which was spread by rats...rats that could have been eliminated by the very cats that were being killed off.

This association with evil and death likely led to superstitions such as it being bad luck if a black cat crossed one's path, or the symbolic black cat that appears in many Halloween decorations. In Germany, the luck depends on the direction the cat walks across one's path: if left to right, you're in for some good luck, but right to left foretells something bad about to happen to you. In the UK, a black cat walking toward you is said to bring good luck, while one walking away from you takes the good luck with him.

In his short story The Black Cat, Edgar Allen Poe wrote of a murderous, abusive drunk who put out his cat's eye one night and then went on to murder the kitty named Pluto, and later his own wife. But the cat exacted his revenge by becoming the personification of the man's guilt, enticing him to lead police to his wife's body entombed in a wall of their house.

There's one type of bad luck associated with black cats that's more than a myth: they were adopted as a symbol of sabotage by workers' organizations in the early 1900s. The Industrial Workers of the World used a black cat as its symbol, taking its arched-back, bared-fangs pose from anarchists of the time.

On the other end of the spectrum, the ancient Egyptians worshiped cats. Bast was their primary feline goddess, and she was mostly depicted as a black cat. Keeping a black cat in one's household in ancient Egypt was thought to gain favor with Bast.

Author Samuel Johnson had a favorite black cat named Hodge who dined on oysters. He wrote several poems and stories about Hodge, as did his friend Percival Stockdale. Johnson even bought the herb valerian to calm the cat in his final days. If you have ever smelled the old-socks aroma of valerian, you know this means he had to love him very much!

Sailors always like to have a ship's cat aboard, to control rats. But a black cat is especially thought to bring good luck to the crew. Some fishermen's wives like to keep a black cat at home to give their husbands luck while at sea. Pirates of the 1700s, however, thought a black cat only brought good luck if it was walking away from a person; if one approached, "Shiver me timbers!"

Australia has a celebrity black cat in its history. Trim was a companion of Matthew Flinders on the HMS Reliance, the HMS Investigator, and the HMS Porpoise. In his short life, he circumnavigated the Australian continent and was a favorite of Flinders' early-1800s crew.

If a black cat walked onto a ship and then off it, that ship was said to be destined to sink on its next voyage. There is even a rumor of a black cat doing this on the Titanic at Southampton.

Former U.S. President George W. Bush and his wife Laura had a black cat named India (nicknamed "Willie") who lived with them for almost 20 years. She lived in both the Texas Governor's Mansion and the White House with them. As is typical, the media largely ignored her in favor of the Bushes' dogs.

A famous black cat in the U.K. is Oscar, also known as the Bionic Cat. Both his rear legs were severed between the ankle and foot by a combine harvester. Luckily, his vet knows Noel Fitzpatrick, star of the BBC show The Bionic Vet. Using pioneering surgery, Noel replaced Oscar's legs with prosthetics custom made for him.

In Scotland, if a black cat shows up at your house, prosperity is on the way. Black cats are actually considered to be good luck all over the United Kingdom. British King Charles I had a beloved black cat who he believed brought him luck. When the cat died, he was arrested the following day and charged with high treason. Coincidence?

In Russia, black cats are considered to be good luck. The Japanese also revere black cats as luck-bringers. This is especially true for single women...likely due to the next fact below.

And listen up, fellow old maid cat ladies: if you have a black cat, you're supposed to have many suitors! In the English Midlands, a black cat is considered to be a good luck gift for a bride.

Myths and superstitions aside, there are many things that make black cats unique and special.

The solid black coat pattern originates from a recessive gene that suppresses the tabby pattern in a cat's coat. Some black cats will have pale remnants of tabby markings if you look closely at them. Black cats typically have black paw pads and a black nose, although some may have brown paw pads.

Having a black coat does not make a cat a specific breed. In fact, the Cat Fancier's Association recognizes solid black as a coat pattern acceptable in 22 different breeds of cats. The only breed that must be all black is the Bombay. They are intelligent cats who crave attention.

A solid black cat is slightly more likely to be male than female. The color of a cat's coat is directly linked to the X chromosome. Since female cats have two X chromosomes, they have a higher chance of displaying two coat colors. Males have only one, so if it's black, he will be solid black.

Panthers are not always solid black. Look closely at some, and you can still see the faint spotted coat of a leopard or jaguar. The spots are a dark brown color, however, due to the genetic combination described above.

Interestingly, the National Institutes of Health conducted a study indicating that black cats may have a stronger resistance to auto-immune diseases.

Most black cats have golden eyes. This is likely due to the higher content of melanin in their bodies. In some, they appear more green.

In my black cat, the skin underneath the black coat was solid white. This was especially obvious if he had been to the vet and gotten an IV, when they shaved the hair off one of his front paws. I also noticed it when he once licked all the hair off his stomach due to stress over a move. Not all cats have white skin, however; a tiger has stripes on his skin as well as in his coat, as do the skin patterns of most calico and tortoiseshell match their coat colors.

When they bask in the sun, some black cats' coats can take on a reddish-brown hue.

In honor of Black Cat Appreciation Day, we made a few black cat calendars our first available for the 2018 year! You'll find them in Old Maid Cat Lady's Calendars section. Happy shopping!
Posted by Lynn Maria Thompson at 8:47 AM