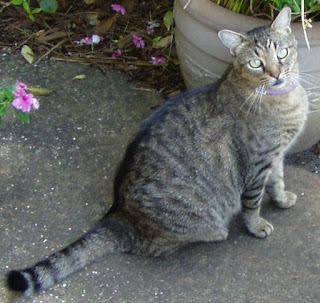 The cat pictured above looks perfectly happy and healthy, doesn't he? We thought so, too, until he developed some health problems, each about a year apart, that looked suspiciously like a disease known as FIP, Feline Infectious Peritonitis.

FIP is an always-fatal condition caused by a fairly common virus to which virtually all kittens are exposed. Most of them develop immunity to it and never show any symptoms. But in some cats, it morphs into the full-blown disease. What makes the difference? To understand that, we must examine how the feline immune system works.

What Does the Feline Immune System Do?

In short, the immune system keeps your cat healthy by fighting off invading bacteria, viruses, and proteins that are foreign to the cat's body. These foreign proteins may come from things like pollen, dust, certain foods, parasites, poisons, venom, or toxins.

There are multiple types of antigens on each cell, as well. Your cat's immune system recognizes the mixture of antigens on kitty's own cells and does not attack them. Different blood types (A, B, or AB in cats) are related to the antigens attached to blood cells within the body. This is why it's important that someone only receive blood transfusions from someone whose blood type matches their own: otherwise, the body's immune system would begin attacking the new blood.

When a foreign substance invades your cat's body, cells in the immune system detect these antigens, recognize them as being foreign to the cat's body and produce antibodies, proteins also known as immunoglobulins, to fight the invader. The type of antibody they produce depends on their past interaction with the antigens on that invading substance and how the body has programmed each of those defending cells to work.

The immunoglobulins have receptors on their cell surfaces that match the antigens on the invader. They bind to these antigens to form an immune complex. The match may be exact or similar. The immune complex neutralizes toxin cells, deactivates virus cells, or breaks apart bacteria cells. It also makes them more attractive to the types of immune cells that eat them.

What Makes Up a Cat's Immune System?

Several parts of the body contribute to a cat's overall immunity. The way they work together is miraculous. They include:
White blood cells are known as leukocytes. Different types of them have specialized purposes. Those in bone marrow known as phagocytes attack and eat anything they deem foreign to the cat's body. Monocytes, granulocytes, and macrophages are a few types of these cells. They are a part of the body's innate immune system.

While monocytes operate from within your cat's bloodstream, macrophages reside in kitty's body tissues for more specialized types of work. Granulocytes are present in both areas.

All these cells move throughout the body via the lymphatic system, which is a structure of vessels similar to the circulatory system for blood. A fluid known as lymph constantly washes the body's organs with the defensive cells.

The adaptive portion of the cat's immune system involves a variety of body parts that communicate with each other to attack specific types of invaders. They also remember how they defeated these invaders in case of future encounters with them. This is the part of the system that provides immunity to future attacks from the same type of pathogen. It is the reason that vaccines work. Each subsequent exposure to the same invading agent triggers a faster and stronger immune response. It typically takes a few weeks after the first exposure to an invader for the cells' memory to provide immunity.

A third type of lymphocyte is known as Natural Killer (NK) cells. These specifically attack cells infected with a virus, as well as cancer cells and microorganisms.

Once mature, B cell lymphocytes move through the lymphatic system, patrolling for invaders and spending a lot of time in the lymph nodes and spleen. They are the ones that neutralize toxins, break apart bacteria, and deactivate viruses. B cells are also the ones with the best memory for invaders previously encountered. They can also make invading cells more attractive to the phagocytes that eat them. Meanwhile, the T cells attach to the invader and send out a dinner invitation via lymphokines to those same phagocytes.

Each mature B cell and T cell lymphocyte has receptors on its surface that recognize specific antigens on invading substances. More than one type of lymphocyte will attack the invading cells (or molecules), each using methods based on the specific antigen it has been born and educated to recognize.

Kittens may receive some of these immune system cells from their mothers in the womb. They are also present in the colostrum in her milk.

What Weakens a Cat's Immune System?

Some cats develop a condition known as Weak Immune System, in which they have too few phagocytes. Several diseases (FIV, FeLV, FPV, FIV, diabetes, cancer) can cause this condition, or it may be congenital. In those cases, it may result from an underdeveloped thymus gland. Cats who have Weak Immune System are more prone to infections affecting the gastrointestinal or respiratory systems, as well as skin conditions.

With kittens, if something prevents them from nursing on a mother cat within their first 24 hours of life, they will not receive the protection of antibodies from the colostrum in her milk. Kitten formulas can fill their tummies and help them grow, but they do not provide that key immune-boosting function. Within 18-24 hours after birth, the kittens begin to develop their own antibodies and no longer need the colostrum. See this recent post on Cat Blood Types for more on a condition known as Fading Kitten Syndrome that can occur with young kittens.

Cats are highly susceptible to stress, which can weaken their immunity just as it does for humans. Stressors for kitties may include minor changes in the home environment, traveling, separation from a beloved human, introduction of a new animal or person into the household, other cats or animals they can hear/smell from outside the home, and grief/pining for a lost human or animal companion.

Certain drugs or parasites can suppress the immune system. The drugs may be given during organ transplants, to prevent the body's rejection of the new organ. Parasites suppress it so they can survive and continue to live in your cat's body. (Ew!)

An immune system can malfunction in ways other than failing to prevent disease, however. One of these presents as allergies caused by the immune system's overresponse to an invader by producing histamines. While allergens tend to cause most people to sneeze or cough, they more often show up in cats as skin issues. Some cats do sneeze or get asthma from allergies, as well. An anaphylactic reaction to an insect sting is another overly enthusiastic response of the immune system.

When something goes wrong in training the cells to recognize invaders, they may start to view the body's own cells as foreign and begin attacking them. This is an autoimmune disease. Sometimes drugs given to treat one thing can alter the body's red blood cells and make them appear foreign to the immune system.

Five common autoimmune diseases in cats are:
Some immune system dysfunctions can result in feline cancers: tumors in the bone marrow, lymph nodes, spleen, or thymus gland. Obviously, leukemia is also a form of blood cancer that results from a malfunctioning immune system.

How Can I Protect My Cat's Immune System?

A very important way to keep your cat healthy is to feed a quality diet consisting primarily of meat. Raw is best, canned/pouched is second best, and kibble is the lowest quality. If you feed a prepared food, look for grain-free formulas with meat as the primary ingredient. Cats also need to receive enough Vitamin A, Vitamin E, and selenium to bolster their immune system.

Certain types of immune-boosting supplements may also be helpful. Ingredients that have been studied and found to be effective include the amino acid arginine, nucleotides, and salmon oil.

Interestingly, outdoor cats have likely been exposed to more diseases in their lives and may have developed a natural immunity to them through the body's own miraculous immune system. This does not mean that you should let your cat live outdoors, however; the dangers far exceed any immunity boost the cat may get, and many outdoor cats don't survive the diseases they encounter. It's far safer to keep your cats indoors.

One way to provide immunity to common feline diseases is to get your cat vaccinated. Cats should receive only three vaccines to protect from the following:
If you are worried about over-vaccinating your cat, you can opt to have a titer test done instead. While many vets like to vaccinate cats annually, newer guidelines call for every 3 years. A titer test will tell you if your cat still has immunity from past vaccinations. Some vaccines, when given in kittenhood, may provide lifetime immunity.

Make sure you request that only non-adjuvanted vaccines be given to your cat. These are also known as modified live vaccines. These may cost a little more. Substances called adjuvants are added to many vaccines to purposely cause inflammation at the vaccine site, with the logic that doing so alerts the immune system to the invader and provides a quicker response. However, there is a strong correlation between adjuvanted vaccines and Injection Site Sarcomas (ISSs, cancerous tumors formerly known as Vaccine Associated Sacromas, or VASs) later developing at the injection site.

There are several other vaccines your veterinarian may recommend. However, at this time, these are not considered necessary. Some are even ineffective...and they may have negative side effects. You do not need to vaccinate your healthy cat against these, and I've lined through them to emphasize that point:
Old Maid Cat Lady used to sell many products that help boost the feline immune system, but you can thank thieves and the banking system for taking away that option for you. Other online retailers also sell products for the feline immune system, although you'll need to do some research to make sure they are safe for cats.

Posted by Lynn Maria Thompson at 10:00 AM

Email ThisBlogThis!Share to TwitterShare to FacebookShare to Pinterest
Labels: cat immune system, feline immune system, how can i help my cat stay healthy, how does my cat's body fight disease