8 Tips To Keep Your Cat From Being the Next "Jack" 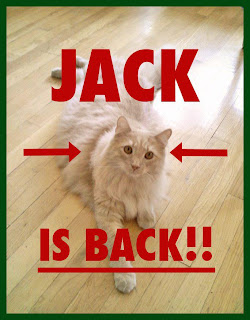 It was fantastic news that Jack, the cat who got lost in transit at JFK Airport in New York, was finally found! At this writing, Jack was still receiving veterinary care for fatty liver disease and muscle wasting from not eating for so long, but he survived his ordeal and will soon be reunited with his doting momma, Karen, who has been updating his fans via Jack's Facebook page.

Sadly, not all pets who fly are as lucky as Jack. 39 of them died in transit on U.S. airlines last year, up from only 23 the year before. While those numbers aren't staggering in light of the thousands of animals who fly each year, if yours was one of the animals who died, they most certainly become so. And in light of the hefty fees airlines charge for transporting animals, that kitty arrives alive should be a minimal expectation.

Problems with Air Travel for Cats

The trauma of flying affects all the animals transported, even those who make it to their destinations apparently unharmed. Unless otherwise arranged prior to flight, animals in carriers travel in the plane's luggage area. While it is supposed to be heated and ventilated, sound insulation there is not as great as in the passenger cabin, and temperatures can plummet if the heating is not turned on or not working properly. Short-nosed breeds like Persians and Exotics may have trouble breathing. And prior to being loaded onto the plane, animal carriers can sit for hours on luggage transport carts or the tarmac in heat or cold if there's a flight delay. There are even stories of some cruel airline baggage handlers taunting pets in containers for their own amusement.

Noises and smells of strange people, places and jet exhaust, especially while separated from his owner, can be highly disturbing to a cat who doesn't understand what this is all about. Such upsets can cause the cat to vomit up any food he eats or water he drinks, which can present a choking hazard at worst, and an uncomfortable environment for the rest of the trip at best. If your cat's carrier is damaged or comes apart from all the jostling about, your frightened cat could escape and hide, which is what happened to Jack, or run away to someplace that puts his life in danger from traffic, weather, or heavy machinery. No wonder kitty's scared!

Tips for Traveling Safely With Your Cat

The upcoming holidays mean that more people will be traveling with their pets. While most of us leave cats at home in the care of sitters, some may take them along. If you have to transport your cat by air, here are some tips to make the trip as incident-free as possible:


CheapFlights.com has an even more complete list of things to do when you're flying with your cat, along with a chart of the requirements and costs for transporting your cat on various airlines. They've really thought of everything. Safe travels, for you and kitty!

Email ThisBlogThis!Share to TwitterShare to FacebookShare to Pinterest
Labels: air travel with cats, jack the cat, traveling with cats