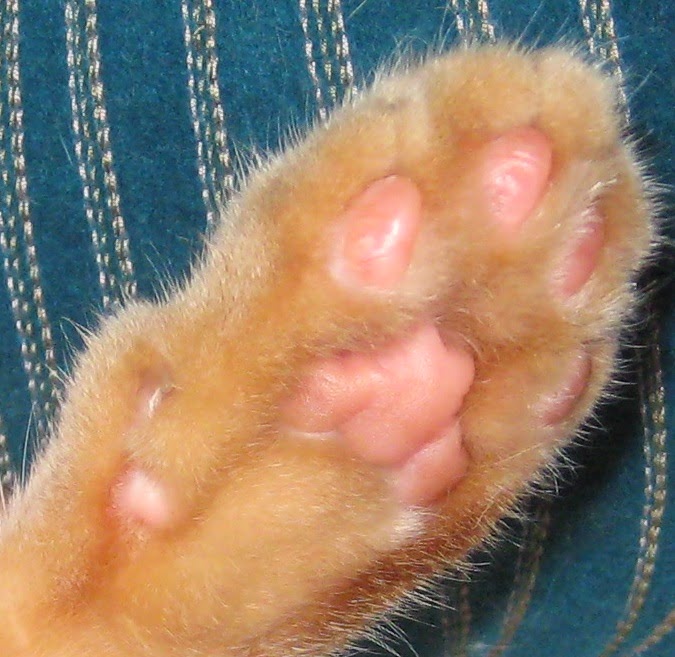 This is what healthy pads should look like on a cat's paw.
If your cat's pads are swollen, it could be "pillow foot."

While checking my Facebook stream this morning, I found a reference to "pillow foot" in a cat, and had never heard of it before. Couldn't resist researching it on this rare morning that I don't have to be anywhere! Things have been so busy lately I haven't had much time to blog here, so it seemed logical to share what I found.

What is Pillow Foot?

Also known as "pillow paw" or "bad paw," this condition affects a cat's foot pads. It causes them to swell and soften, sometimes causing the cat pain when walking. Pillow Foot can affect cats of any age, breed, or gender. It's fairly rare, so not much research has been done on it. This leaves plenty of mysteries about the condition.

Some cats who get pillow foot may not be bothered much by it, and it may heal on its own. Some cats who suffer from this condition may also have other serious conditions related to plasma cell production. These include stomatitis, which causes painful swelling of the gums, and/or renal amyloidosis (kidneys). In one case I found online, the cat's nose was also swollen and painful.

While pillow foot itself is not a contagious or life-threatening condition in most cases (one article said that 1%-2% of cats have died from it), it may be linked to others that are. It may be a condition that occurs as a symptom of serious diseases like FIV and FeLV. And open sores or cracks in the cat's paws leave those areas open to bacteria and secondary infections that could become problematic.

What Are the Symptoms of Pillow Foot?

Your cat's paw pads may simply become a little swollen at first, and perhaps tender to the touch. You may think kitty has stepped on something that irritated them, or perhaps been bitten by a bug on the pad. But as the condition worsens, the pads may become greatly enlarged and start looking dark red or purple and bruised. (The bruising may be harder to see on a cat with black pads.) They will even feel spongy or mushy, somewhat like a marshmallow. The pads may have scaly cracks on them as well, almost appearing "crusty" - this symptom is actually easier to see on cats with black pads.

The cat may be favoring the affected feet or limping, as this can become quite painful...but not always, especially in early stages of the condition. Kitty may lick the affected paws to seek relief. Typically more than one foot is affected. This is one of the telltale signs that would differentiate pillow foot from other causes of paw irritation.

Sometimes there may be a sore or ulcer on the swollen pad. These may burst and bleed. Because the skin is so stretched with the swelling, it can become thin and may split open and bleed, even without ulcers. This exposes the tissue underneath to bacteria that can lead to secondary infection. You may see some bloody paw prints that indicate this is happening.

The cat may appear listless and show little interest in eating as the pain increases. This will lead to anemia as the condition becomes progressively worse, since the cat is not getting proper nutrition.

The medical name for this condition contains a clue: plasma cell pododermatitis (sometimes abbreviated to "plasma cell pod"). It's caused when blood plasma cells pool in a cat's paw pads and this abundance of antibodies floods the pad, causing the swelling. This is an immune reaction, and the condition is often associated with cats who are FIV-positive (feline AIDS). Some cases have had a connection to cats who are infected with FeLV (feline leukemia). Some studies have shown a link between those diseases and this condition, but not enough research has been done to definitively make the connection.

In a healthy cat, the body produces lymphocytes (white blood cells) that activate and develop into mature plasma cells in the presence of invading pathogens that cause disease. These plasma cells are the antibodies that kill off the invaders and enable the cat to recover from the disease. But when the immune system is compromised, too many of these cells can be produced. Sometimes they attack a cat's healthy cells. In this pillow foot condition, they all head to a party in the cat's paw pads.

Other vets' experience shows a link to the feline calicivirus, a cause of respiratory infections in cats. They postulate that while the cat's immune system is fighting off that virus, kitty becomes susceptible to whatever causes pillow foot. There may also be a relationship with FIP (feline infectious peritonitis). Here's a previous post about FIP. It's another viral-triggered condition in cats, albeit much more serious than pillow foot.

One veterinarian noted that hamsters can get a similar condition when their bedding consists of low-quality sawdust or wood shavings, and speculated that the type of cat litter used can contribute to pillow foot in cats. With the viral connection, it could be that a cat fighting off a virus may develop pillow foot from stepping and digging in a similar type of cat litter. With more litters made from paper, wood fiber, and corn on the market these days, there are more cats being exposed to these materials than when most litters were made of clay. Again, without more study, this connection cannot be confirmed.

Since it hasn't been extensively studied, veterinarians mainly identify this disease by its appearance. There may be a viral cause for pillow foot, but evidence for it is primarily anecdotal. Without more research, this cannot be stated for certain.

How is Pillow Foot Treated?

Some cats recover from this condition without any treatment. If you notice the early symptoms, monitor the situation closely and perhaps try some natural remedies as described below to see if they help.

More severe cases will require a visit to your cat's vet. It is a rare condition, so some newer vets may not have experience with it. Couldn't hurt for you to print out this blog post, or at least jot down the name of the condition, so you can suggest your suspicion that this is what is bothering your cat. A more experienced vet may be able to diagnose pillow foot by merely examining the cat's feet, but may also take a biopsy to verify the presence of a high number of plasma cells. If your cat has not already been diagnosed with FeLV or as FIV+, the vet may also run a complete blood panel to check for these.

Usually at this time, veterinarians will prescribe an oral antibiotic such as doxycycline (doxy) or cyclosporine for several months to treat pillow foot. These are the preferred antibiotics due to their additional ability to temper the cat's immune system, toning down the production of antibodies and fighting inflammation. It may take up to two months for the cat to feel relief, but treatment needs to continue beyond this time, perhaps even for several more months, while the condition is in remission.

Not a fan of prescription medicines? Giving some natural anti-viral and anti-inflammatory supplements may also help your cat. Supplements to support kitty's immune system may also be useful in normalizing the production of antibodies. If you catch the condition early enough, it may stave off that visit to the vet. Even if you do choose the traditional medicine route, these may attack the condition from another angle and speed recovery. One study recommended switching your cat to a raw diet.

Healing may be promoted by soaking the affected paws each day in an antibiotic solution or healing treatment like Epsom salts or Vet Aid's Sea Salt Wound Care Spray or Foam. It may prevent the pads from cracking by helping moisturize them, as well. If you can get your cat to sit still for such treatment, however, you're a stronger woman than I! Try swaddling kitty into a "purrito" (also useful for trimming back claws of reluctant felines), petting and talking or singing softly to kitty on your lap while soaking them. Doing this may allow you to place some cotton balls soaked in the solution on the pads, even if only briefly. It should be noted that topical treatments will not "cure" this condition, but only support the cat's natural healing.

For cats who don't respond to doxycycline treatment, the vet may prescribe and oral steroid such as prednisone or a glucocorticoid. If the cat is one who cannot be given daily pills or liquid medicine, injections of a long-acting steroid such as methylprednisolone acetate may provide some relief. Pentoxifylline is a newer treatment for the condition.

If the footpads have developed large ulcers taking on the appearance of a mass, these must sometimes be removed surgically. If the condition becomes too serious before treatment, kitty may even lose some of his pads entirely.

As related above, some cats with pillow foot also exhibit symptoms of gum disease. Your vet may need to do dental surgery to remove any teeth affected by periodontal disease. This can help by removing another stimulus to the immune system, so that it is not over-producing the plasma cells accumulating in the cat's pads.

Is There Any Way to Prevent Pillow Foot?

If your cat contracts a virus or is confirmed to be FeLV+ or FIV+, make sure to keep the litter box extra clean. Check kitty's foot pads frequently for any early signs of pillow foot. Giving an immune-supporting supplement can't hurt.

If your cat has been affected by pillow foot before, keep him from walking on lawns recently treated with chemicals, and be careful what types of cleaning products you use around the house. Make sure they're safe for use around cats, who tend to walk everywhere.

Considering how many articles referred to this condition as "rare" it was rather surprising how many articles and blog posts exist on it! In some of those, the authors even described multiple cats afflicted with pillow foot. Perhaps it's less rare than previously believed. Because it's not a life-threatening condition, however, chances are slim that additional research funding will be directed toward it, especially since there are many more serious (and more common) feline disease studies on which those dollars are being spent. Hopefully this article can help you recognize pillow foot if it is affecting your cat and seek an appropriate treatment.